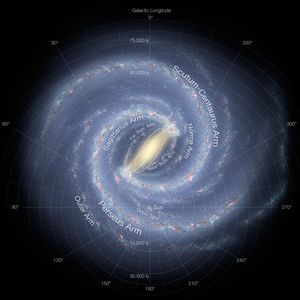 The Milky Way's Sagittarius Arm was explored by the Forerunners thousands of years ago and at least one shield world, designated 10021, was constructed under the direction of Warrior-Servants in a distal star system of this arm.[1] Prior to the firing of the Halo Array in 97,445 BCE, the rings known as Installation 01 and Installation 07 were transported from the extragalactic Installation 00 to points in the Sagittarius Arm.[1] Installation 01 was placed at the Array's Beta position distal to the offshoot of the Orion Spur and Installation 07 was placed at the Zeta position, proximal to Orion.[1] It was from these locations that Beta Halo and Zeta Halo killed every unprotected life form with even the most rudimentary of nervous systems within twenty-five thousand light-years of each.[3][4]

Following a large 2543 battle in the Psi Serpentis system between UNSC Battle Group India and two Covenant fleets, scattered reports of independent human forces fighting the Covenant began to pop up on the outer edge of what the Office of Naval Intelligence believed to be nonsanctioned human colonized space.[2] These reports tracked toward the Sagittarius side of the Orion Spur.[2] Following the end of the war between the Covenant and humanity, Installation 07 was discovered by humans a few years after the war and before long the UNSC dispatched of researchers to study it.[5]

The Sagittarius Arm holds a number of Forerunner constructions. Proximal to the Orion Spur lies Installation 07.[1] Shield World 10021 can be found just beyond the Orion-Sagittarius junction and further beyond it is Installation 01.[1][note 1]