"Isolate and contain."
— Henry Lamb reiterates one of the project's goals, specifically with regard to Zeta Halo's activation index.[1] 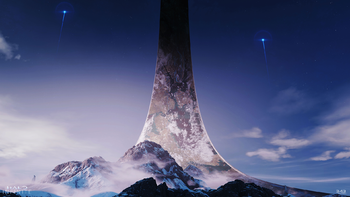 Installation 07 is the last remaining ring of the originally twelve-strong Senescent Array.[2]

The Zeta Halo project or Zeta Halo operation was a Unified Earth Government initiative to study, decommission, and occupy Installation 07, the fourth Halo ring to be discovered by modern humanity.[1][3][4] Overseen by Doctor Bob Casper, it involved both a scientific outpost and a large military presence.[1][4] The project was first launched in early 2555 and within a few months its researchers discovered a countdown signaling the imminent activation of the entire Halo array.[1][3] In the years which followed the averting of this near-crisis, what was originally only around three hundred researchers grew to include armed forces of the United Nations Space Command.[1][4]

While exploring the enormous Forerunner shield world Onyx in late 2553 or early 2554, respected scientist and expert on Forerunner history and culture, Doctor Luther Mann, discovered records hidden deep within the shield world's vast information pathways.[1] He labored to translate them for a year before they finally revealed the existence and location of Installation 07 just as 2555 was dawning. Doctor Mann's discovery catapulted his academic career, placing him front and center with many scientific publications and organizations. In addition to invitations to lecture at numerous universities, he was summoned to the headquarters of the United Nations Space Command on Earth to provide a detailed report of the methods he had used to locate the Halo. The Office of Naval Intelligence was primarily concerned with quarantining and securing all known Halo installations in order to alleviate the risk they posed to the galaxy.[1]

Henry Lamb: "Every Halo has a monitor, right? Like 343 Guilty Spark on Alpha Halo, for instance. So why can't we find one here? As much as we've searched this place, we've consistently come up empty. And it hasn't found us, which is even more surprising, given the time we've spent here. It leaves me wondering whether there simply isn't one here, or if it's hiding for some reason."
Luther Mann: "For some reason? I would think the reason would be obvious, at least one of them. Human and Covenant interactions on these installations have not always been the best. If the monitor of this Halo is aware of that, it might be inclined to steer clear of us. I know I would."
— Two researchers speculate regarding the apparent absence of Zeta Halo's monitor.[1]

ONI set about conducting research on the vast interior world that composed the inner workings of Zeta Halo shortly after its location was revealed.[1] No expense was spared for the project, as there was lots of territory to cover and the risk of something being overlooked was great. In addition to the researchers delivered to the ring, hundreds of automated probes began to be used to scan every canyon, riverbed, and facility. As had been the protocol for other Halo installations, a primary goal of the project was the isolation and containment of the activation index.[1] As such, finding the library was of great importance. Ideally, all important facilities would be quickly located and secured. Ultimately the Halo's control room could provide all the necessary information and some of the critical functions the humans sought. Despite much searching, the ring's library, control room and monitor were still yet to be located by early March. On Alpha, Delta, and Gamma Halos the control room had been the largest uniform structure near the phase pulse generators, but these also remained undiscovered. As for the lack of a monitor, Henry Lamb wondered if perhaps there simply may not be one or if it might be hiding for some reason. Luther Mann figured that if it were hiding, one obvious reason for it to do so would be the recent history humanity and the Covenant shared with the Halo rings. A monitor remaining hidden didn't sound consistent with the historic understanding they had of the ancillas, but both men had to admit consistency was by no means mandatory and that it was possible this ring had been made differently for reasons they didn't understand. This early into the ring's exploration it was already apparent that clear and subtle differences distinguished it from the others in the array, after all. Some clear differences on a meta level dealt with the physical infrastructure and material composition of the ring itself, but other far subtler ones involved things like the architectural aesthetics of various building structures and machinery or even the machine language of its distributed systems. Zeta Halo, as a whole, was unlike any other such installation anyone was familiar with. Mann and Lamb theorized that it may have been constructed before all the others, incorporating lessons learned from previous Halo architecture, or that it could have come first and served as a sort of prototype.[1] It was not until much later that year that a data drop recovered from deep space revealed the real reasons for Installation 07's marked differences.[5]

At about 0900 hours on March 8, 2555, Doctor Mann discovered a countdown sequence in a corridor connected to one of the ring's atmosphere and climate control centers.[3] He immediately reported this find to the project's manager, Bob Casper, who in turn passed the news along to ONI. Casper also contacted his research counterparts on the other Halo rings being monitored and they discovered identical synchronized countdowns on each. In addition, Henry Lamb was thereafter able to trace a steady pulse which ran straight to the control room. And so while this newfound numerical reverse progression finally achieved one of the project's aims, it also spelled doom for the galaxy, as it indicated the entire Halo Array would fire in just a matter of weeks. Lamb informed Casper that there was no way to intercept and shut down the activation circuits which would trigger the firings. Luther tried a number of things, but any attempt to shut down a single pulse caused it to reroute. At the behest of CINCONI Serin Osman, Doctor Casper recalled Mann and Lamb to Earth to assist with the investigation of the then-inert Excession in East Africa, as it was determined a team needed to be sent to Installation 00 as soon as possible. Even so, various teams on Zeta Halo remained to work on stopping the countdown.[3] In the end, both men from the project joined a joint team of humans and Sangheili that traveled to the Ark and managed to avert catastrophe.[6] It was on Zeta Halo that individuals in the Milky Way first learned that the countdown had ceased on March 20, which caused out-and-out rejoicing.[6][7][Note 1][Note 2][5][8][9]

By October 2558 Zeta Halo's caretaker protocols were still impossible to predict or control and both its monitor and library remained elusive.[4][Note 3] These oddities left many questions yet unanswered as to the function and role of the ring within the larger array. By then, the large contingent occupying Zeta Site had taken on a military character in addition to a scientific one and had constructed facilities on the ring's surface.[4][10]

"Our forces occupy the ring. Within hours, it will be under our control. Humanity will burn. Their brazen defiance will be all but a memory."
— The Banished state their status on Zeta Halo.[11]

In addition to the standard protocols employed at all Halo installations, ONI handed down an additional mandate for the Zeta Halo project against doing anything that could activate or manipulate any Forerunner technology at the site.[1] This mandate was created due to Installation 07's peculiarity and as of early March 2555, nobody had been inclined to disregard it.[1]

Luther Mann: "Do you have any idea how confidential the material that we are working on is?"
Henry Lamb: "Luther, there are at least three hundred people here."
Luther Mann: "People who have received security clearances at the highest levels."
— Doctor Mann berates his engineering associate upon first hearing he had discussed the project with someone outside of it.[1]

The Zeta Halo project was headed by Doctor Bob Casper, its manager.[1] Naturally, Doctor Luther Mann's participation was not only welcomed, but insisted upon by top individuals within ONI. By March of 2555 he had joined an expedition on the ring that also included Henry Lamb of ONI's Xeno-Materials Exploitation Group. There was no human more conversant with or qualified to study and if possible, fix, Forerunner technology at the time than Lamb. By this point at least three hundred individuals were exploring different areas of the ring, each looking for something else. All had received security clearances at the highest levels. Specialists in planetary engineering studied biomes which had been seeded there from other worlds long ago. Others explored flora; others fauna. Some, such as Doctor Mann, had a particular interest in Forerunner language, an understanding of which was indispensable for the effort to unlock Zeta Halo's secrets. The ring was divided into sectors which could be assigned to specific explorers, teams, or archaeological parties. At least some teams at this early date were working out of tents.[1]