Africa is the second-largest continent on Earth. It has a multitude of peoples, languages and cultures.[1]

Ancient humans witnessing the near-completion of the Portal.

Following the conclusion of the human-Forerunner wars, the humans that were permitted to live on were taken to Earth and were given over to the care of Lifeworkers for observation and study. The Librarian herself gave many humans geas at that time. As the last years of the Forerunner-Flood war waned, the Conservation Measure saw species from all across the globe collected for future preservation, in one way or another. It was from Africa that the Librarian oversaw her efforts on Earth, and it was there she remained even up unto the point where star roads and the Flood entered the Sol system. Her last act was to set the construction of the Portal in East Africa into motion. It would go on to be completed after the firing of the Halo Array, but even after humans were returned once more to the planet, it lay dormant, eventually being covered by the Earth as the years went on.

Due to Africa's wealth, the continent has experienced numerous wars.[1] 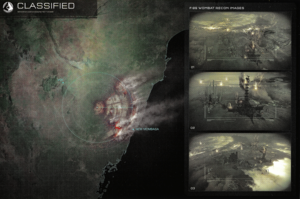 ONI surveillance of the Covenant's excavation of the Portal, burning away much of the surface of Eastern Africa.

On October 2552, the Prophet of Regret found Earth in search of the Portal. They landed only in one spot in the country of Kenya, in and around the city of Mombasa.[2] Regret's forces tried to hold onto and capture the city from the UNSC Defense Force, but failed. Then, his flagship, Solemn Penance, jumped into Slipspace, damaging the city. After this, more Covenant ships appeared, glassing Mombasa and its surroundings to uncover the Portal to the Ark, which had been buried under the ground for more than a hundred thousand years.[3] Fighting also took place in Cairo.[1]

Four weeks later, the uncovering process of the Portal was complete. The Prophet of Truth came to Earth on his Forerunner Dreadnought, landing in the center of the Portal. The UNSC, believing the structure to be the Ark, attempted to stop the Covenant from activating it, with no effect.[4] Truth and his fleet escaped through the Portal, and a Flood-infected ship arrived just after, followed shortly by the Sangheili. To prevent the Flood from spreading and consuming the planet, the Fleet of Retribution glassed a large portion of the continent, bringing a bitter and violent close to the Battle of Kenya.[5]

In 2555, the portal was activated again, leading to a massive invasion of Earth by Retriever Sentinels sent by 000 Tragic Solitude, that was stopped by the human and Sangheili forces at Installation 00.[6]

As the second largest continent, Africa takes up approximately 20% of Earth's land area. It is both verdant and features deserts. Both Kenya and Tanzania were located in east Africa,[1] with Zanzibar Island located off the east coast of the continent.[7]