Sangheili Major: "Brute ships! Staggered line! Shipmaster, they outnumber us, three to one!"
Rtas 'Vadum: "Then it is an even fight... All cruisers, fire at will! Burn their mongrel hides!"
— A Sangheili Major navigator advising Shipmaster Rtas 'Vadum

The Fleet of Retribution[4] was a naval formation composed of ships under Sangheili command that broke off from the High Charity defense fleet, including Second Fleet of Homogeneous Clarity, when the Great Schism began. The fleet was led by former Special Operations Commander of the Fleet of Particular Justice Rtas 'Vadum, with Shadow of Intent serving as the flagship. The Fleet of Retribution was the only known group within the Covenant separatists to ally with the UNSC during the Great Schism. The fleet briefly took in forces from the devastated UNSC Home Fleet during the final days of the Human-Covenant War. During the joint assault on the Forerunner Installation 00, the fleet played an instrumental role in bringing about the Covenant's defeat. After the war, the fleet's personnel and naval components would be incorporated into the reformed Swords of Sanghelios.

A portion of the Fleet of Retribution pursues the Indulgence of Conviction to Earth.

When the Great Schism erupted across the Covenant-controlled space during the Battle of Installation 05, the Second Fleet of Homogeneous Clarity was split in two. Sangheili-controlled ships and those under Jiralhanae leadership began to open fire on each other over High Charity. Many Covenant species in proximity to the Sangheili remained loyal to them during the conflict, notably the Unggoy and the Mgalekgolo.[5]

On Installation 05, Arbiter Thel 'Vadam had formed an uneasy alliance with Sergeant Major Avery Johnson in order to stop the Chieftain of the Jiralhanae Tartarus from activating it. While the conflict for the Delta Halo was raging, Rtas 'Vadum and his strikeforce managed to recapture the Shadow of Intent from the Jiralhanae and seized control of the carrier.[6][7] The damage taken during the hand-to-hand combat of these boarding actions was hastily sealed off and much left without full repair.[8] With the carrier now served as the flagship of the newly-formed Fleet of Retribution coming under the command of Fleetmaster Rtas 'Vadum, the Shadow of Intent along with the Eternal Reward, were the two only Sangheili-crewed assault carriers to partake the space fight against the Jiralhanae-led vessels loyal to the San'Shyuum over the High Charity at the time. During the battle, Eternal Reward was attacked by a loyalist fleet of eight destroyers and cruisers at close range led by Prelate Tem'Bhetek's modified Zanar-pattern light cruiser Spear of Light. The carrier was able to destroy its attackers save for the Spear of Light before being destroyed by the light cruiser after its crew were forced to abandon the ship.[9]

The Shadow of Intent led the blockade of High Charity and traded plasma torpedoes with San'Shyuum-controlled vessels to prevent any ships from escaping the quarantine of the station. No loyalist vessels was capable of matching Shadow of Intent in firepower and therefore intended to overwhelm the warship with a multitude of cruisers once its support ships had been destroyed. However, this plan went awry following the emergence of the Flood. During the blockade, Shadow of Intent used its ventral beam to partially glass High Charity in an attempt to combat the Flood aboard it.[9] The Sangheili-controlled remnants of the High Charity defense fleet, which stayed behind during Imperial Admiral Xytan 'Jar Wattinree's summons at Joyous Exultation, were reformed into the Fleet of Retribution.

After Tartarus was ultimately killed at the hands of Thel 'Vadam and the firing of the Installation 05 was averted, the new alliance formed between the Sangheili and UNSC shortly carried over to the rest of the Fleet of Retribution. The Arbiter, Miranda Keyes and Avery Johnson would rendezvous with 'Vadumee. Together, they formulated a plan to get to Earth and also for sterilization and quarantine of the spreading Flood on the Halo Installation 05. 343 Guilty Spark, the former monitor of the Installation 04, remained with the fleet to coordinate containment efforts while the Arbiter, Usze 'Taham, N'tho 'Sraom, Keyes and Johnson, and the surviving UNSC forces raced back to Earth aboard one of the fleet's vessels to warn humanity and to locate the Ark before November 15, 2552.[1][10]

Following the Prophet of Truth's escape to Earth aboard the Forerunner Dreadnought along with the remaining loyalist ships of the High Charity defense fleet, most of the fleet Thel 'Vadam and Rtas 'Vadum, hence hundreds of ships, remained near Halo Installation 05 to quarantine the local Flood threat by glassing the surface and also blockaded the ringworld to prevent the Flood from escaping after the Sangheili forces eventually triumphed at the Halo installation.[2][11] However, a Flood-controlled vessel, Indulgence of Conviction, evaded the blockade and headed for Earth. A battle group of the fleet consisting of at least 14 Ket-pattern battlecruisers, including the Pious Inquisitor, and at least 2 CAS-class assault carriers, including the flagship Shadow of Intent herself, chased after that ship including near a ringed gas giant planet.[3][7]

It is unknown what happened to the rest of the fleet following the Rtas 'Vadum's battle group's departure to Earth and after High Charity, under the power of the Gravemind, forced its way out of quarantine and made its way to Earth as well but later to the Ark instead to stop the Prophet of Truth's attempt to activate the Halo Array at the massive Forerunner installation.

Action on Earth and Installation 00[edit] 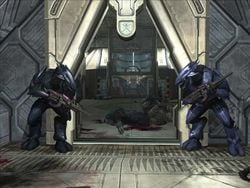 Infantry from the Fleet of Retribution during the Battle of the Citadel.

The battle group of the Fleet of Retribution arrived on Earth during the closing stages of the Battle of Voi, soon after the Indulgence of Conviction when the Flood on Earth has begun to spread from the Flood-controlled battlecruiser. The fleet deployed several Sangheili forces against the Flood and allow the Spartan John-117, the infamous "demon" to the Covenant, to recover a pre-recorded message from Cortana aboard the crashed Indulgence of Conviction.[2]

After recovering the message, the Shipmaster 'Vadum ordered the fleet to glass the area immediately surrounding Voi to prevent the parasite from spreading further. Thel 'Vadam convinced Rtas 'Vadum to exercise restraint when glassing. Thus, only an area of Africa was glassed instead of a much wider area. The fleet would have glassed the entire planet if it was not for the Arbiter's counsel. The glassing of Voi by the Sangheili was much to the dismay of Fleet Admiral Terrence Hood who exaggeratedly accused them for glassing "half of the continent" most likely due to his continious distaste for his former foes for leading the Covenant forces against the humanity throughtout the Human-Covenant War and being responsible for the losses of many human colonies such as Reach.[2]

'Vadum then attended an assembly on his flagship's bridge, wherein it was decided that a joint human-Sangheili force would pursue the Prophet of Truth's massive fleet through the slipspace portal that had recently been opened. Subsequently, the Fleet of Retribution, along with UNSC forces of the Battle Group Victory of the Seventh Fleet, including the UNSC frigate Forward Unto Dawn, engaged the Prophet of Truth's forces at Installation 00. Confronted with an enemy which outnumbered them three to one, the Fleet of Retribution nevertheless succeeded in destroying the Covenant's orbital forces, assisting the UNSC on the surface of the Ark.[12] The surviving members of the Fleet of Retribution and human forces evacuated Installation 00, leaving Truth's remaining forces to their doom. Only Shadow of Intent and Pious Inquisitor are known to have survived the Battle of Installation 00, though it is possible that other vessels remained intact.[13]

After the Sangheili were victorious in destroying the Covenant, they split off into several different factions. While numerous of surviving Sangheili from the Great Schism, including the majority of the Fleet of Retribution, joined the Arbiter's emerging and renewed Swords of Sanghelios, which would become the official government of Sanghelios, many have chosen to take control over what was left of the former Covenant that they had destroyed; some joined Jul 'Mdama's Covenant while others consolidated into smaller independent factions.[14]

Due to the increasing of the Sangheili civil war known as the Blooding Years, the Shadow of Intent and its crew was taken far away from Sanghelios and sent to the frontiers of the former-Covenant territory in an attempt to find rest and recuperation following the Human-Covenant War. At this point, Shadow of Intent was ordered by Thel 'Vadam to be out of reach of allies whose loyalties were not as certain as Rtas 'Vadum's.[9] Between March 6 and August 24, 2553, the carrier was believed to be retrieving former Covenant long-range exploratory fleets.[15] At this time, Shadow of Intent was the only operational CAS-class assault carrier within the Swords of Sanghelios fleet.[9]

The Shadow of Intent was involved in a battle on the Sangheili colony of Rahnelo. The San'Shyuum Prelate Tem'Bhetek set a trap for Rtas 'Vadum and the Shadow of Intent. Many lives were lost and the Kaidon and two of his sons were taken hostage. The plot, which involved using a Prototype Halo installation to destroy Sanghelios was ultimately thwarted by the crew of the Shadow of Intent with help from Tem after he realized he was being manipulated by the Minister of Preparation Boru'a'Neem. Having learned from the Spear of Light's navigation database that there was a fleet of thousands of San'Shyuum still out there, Shipmaster Rtas 'Vadum decided to seek them out and try to determine who should be pardoned as innocents and who should be persecuted as war criminals.[9]

The Fleet of Retribution was composed of hundreds of warships during the glassing of Installation 05, mostly composed of what it remains within the High Charity defense fleet when these ships did not join the Imperial Admiral Xytan 'Jar Wattinree's summons and its Combined Fleet of Righteous Purpose. At least one battle group of at least 16 warships of the fleet, including the flagship Shadow of Intent, was known to be present during the Battle for Earth, where it eventually later participated in the Battle of Installation 00.[Note 1][3]

Other forces serving with Retribution include allied UNSC forces, such as S4/BRT/1/7, S4/BLCE/1/7, 11th Marine Force Reconnaissance/ODST, and Battle Group Victory of the UNSC Seventh Fleet, including the UNSC Forward Unto Dawn.[12][16]