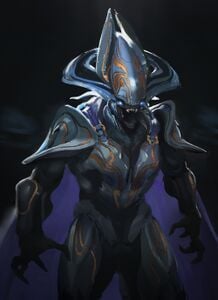 Xytan 'Jar Wattinree, the only known Imperial Admiral within the Covenant empire.

Imperial Admiral was the highest military rank in the armed forces of the Covenant empire - above the authority of the empire's Shipmasters, Fleetmasters and Supreme Commanders.[1]

The full extent of the role and responsibilities of the Imperial Admiral title are unclear, save for it being the highest point of authority within the military mechanisms of the Covenant. Its only known title-holder was Xytan 'Jar Wattinree, an Imperial Admiral in the final years of the Covenant who held considerable sway throughout the empire for his natural talent and insight. At the height of his influence and popularity, Wattinree was exiled from High Charity to command the far-flung Combined Fleet of Righteous Purpose - an armada of warships charged with oversight of the most far-flung reaches of the empire. This was done due to Xytan's authority threatening to outstrip that of the Hierarchs.[1] This is likely an example of a Covenant High Fleet exile, in which a powerful and charismatic Sangheili officer would be exiled to the far-flung reaches of the empire as a cap on their power and bestowed numerous ceremonial titles and names - but ultimately provided little legacy.[2]

Imperial Admiral Wattinree was one of the foremost voices of the separatist movement at the start of the Great Schism, and assembled a force of around two hundred ships in orbit of Saepon'kal with the intent of leading a massive counterstrike on the Jiralhanae Alpha Tribes, with the intent of then leading his force to exterminate the outbreak of Flood on Delta Halo before ultimately continuing with the genocide of humanity as per the original vision of the Covenant. Ultimately, this force was stopped by a NOVA bomb planted aboard Xytan's supercarrier Sublime Transcendence.[3][1]