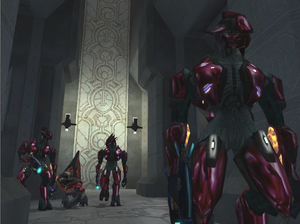 Several Sangheili and Unggoy Majors; the rank of major was considered the first step in the ranks of the Obedientiaries.[1]

Obedientiaries (Sangheili: lesser chosen, charged with glory)[2] are a rate of senior personnel employed in the Covenant military - serving as the rough equivalent to the concept of commissioned officers in the United Nations Space Command and Colonial Military Authority.[1][2] Obedientiaries are veteran warriors who have begun to step foot on the path of command, and are thus expected to experience every facet of warfare.[3] A part of this selection process involves those warriors who are able to temper their bloodlust and survive their first battles - with their experiential process expected to see them take on missions requiring cunning and courage in equal measure.[2]

Obedientiary is not an explicit rank, but an overall grouping for a number of ranks and roles found throughout the Covenant and its remnants. The ranks of Major, Officer, Sub-commander, and Commander all fall within this grouping[1][4][Note 1], with the Enforcers of the Banished modelled after the Covenant's obedientiaries to fulfil a similar role.[5] Obedientiaries may be expected to organise lesser warriors such as Minors and thralls, though they will still nonetheless seek honour and glory in a similar manner as any younger warrior. They generally sport more ornamental harnesses usually in a red (or similar) colouration to denote their status - and will often close with the enemy and engage their forces directly on the battlefield in comparison to the UNSC, who expect their officers to lead from a more dispassionate view. These tendencies, alongside their skill-at-arms, mean that their distinct visual aesthetic is the only way human forces are able to distinguish Obedientiaries from their lessers.[2]

As part of their requirements to experience all aspects of war, Obedientiaries may fulfil the duty of officers aboard smaller Covenant starships such as intrusion corvettes.[6] Pilots of Covenant space fighters and dropships such as Seraphs and Spirits were also drawn from the ranks of the obedientiaries.[3][7]

In medieval Europe, an obedientiary was a lesser position in a monastery, appointed by a superior. The name is drawn from the latin word obedientiarius, meaning someone in an obedient or subordinate position.