"Their language doesn't translate in a literal manner, and each word has multiple meanings."
— Cortana[1] 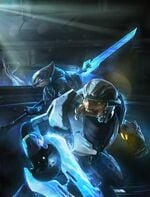 This article is part of a series on
Sangheili

Text, or writing, in Sangheili appears to be mostly triangle shapes and composed almost completely of equilateral triangles. The triangular characters have been seen oriented both in the horizontal left-to-right direction and in a vertical right-to-left direction.[6]

Though originating with the Sangheili, an advanced dialect of their language has come to be the Covenant lingua franca, used to connect the different races and species.[3] Curiously, in several instances of Forerunner-related terminology, the Sangheili appear to use the English translations of the original Forerunner terms, as for "Forerunner", "Requiem", "Reclaimer", "Didact", and "Librarian".[7][Note 1] During the San'Shyuum-Sangheili War, the San'Shyuum obtained a comprehensive understanding of the Sangheili language by brutally torturing and interrogating prisoners of war. After establishing peace with the Sangheili, the San'Shyuum of the fledgling Covenant relied on translation software built into their anti-gravity chairs to understand the language.[8] The Ussans developed in isolation from other Sangheili, and their language evolved into a different form of the Sangheili dialect. It possessed similarities to Old Sangheili,[9] but the language developed into a new dialect that could not be readily understood by the "average" Sangheili.[10]

/ɴ/ and /ɴ:/ appear before or after the uvular consonants /q/ and /ɢ/ in place of /ɳ/ and /ɳ:/. /ɺɽ~ɭ/ can sometimes be heard as either ɺɽ or ɭ but is generally an intermediate sound. The sound /ɺɽ~ɭ/ itself has no human equivalent. /ɻ/ and /ɽ/ allophones of the same consonant. In reality they are only approximates of the Sangheili r sounds which has no human equivalent. Most users prefer to use /ɻ/. /ä/ is near front and closer to the Japanese /ä/ but some speakers pronounce it as a central vowel like the Italian /ä/. Some speakers use /ä/ insead of /ɑ/. /e̞/ and /i/ are near front vowels and not front vowels. /ɔ/ and /o̞/ are allophones of the same vowel. As such their use depends on the speaker’s preference. /ʊ/ can be used instead of /u/ when /u/ is short only. /ɯβ/ can be used instead of /u/ regardless of whether /u/ is short or long. The sound itself is compressed and neither rounded nor fully unrounded. It is pronounced like the Japanese u. /ɰβ/ is a compressed labiovelar approximant. It can also be symbolized as /wβ/. It is pronounced like the Japanese w.

Sangheili also makes use of the following diphthongs:

Note: All words in the following list should not be pronounced as if they were English. Please refer to the phonetic transcription system above.

Ancient words, names, and words of extinct or other Sangheili languages.

Modern words with known or assumed meanings based on context.

Several species, including humans,[31] Mgalekgolo,[32] Unggoy,[33] and Kig-Yar[34] are able to speak Sangheili. Not all races can speak the same language due to evolutionary design restrictions; for example, the Yanme'e could only communicate through a cacophony of high-pitched clicks and screeches.[35][36] To facilitate easier communications between member species, translation software is used on Covenant ships to decipher words.[37] During and after the Human-Covenant War, several humans were able to understand Sangheili :

There are four known written types of the Sangheili language.

There are a few different translations for these types of symbols. They are seen often in transmissions and on control panels. These have been in use as early as February 4th 2531 in transmissions during the Harvest Campaign.[42]

These are all the symbols and patterns related to them.

These symbols are often borrowed or adapted from actual Forerunner symbols for use in speech, on Sangheili armor, and even on Covenant technology.

An ancient version of the Sangheili script appears in Sangheili ruins and ceremonial curveblades. Symbols similar to the modern triangular symbols appear. They can also be seen on modern Swords of Sanghelios flags.

This type is numerous symbols and images.

The Covenant speech in Halo: Reach is actually able to be translated.[44] A common useful word to understand in gameplay is "awugapu," which is used to announce that a grenade is being thrown.

The languages in their original form are heard in Halo: Combat Evolved. In Halo 2, their words are translated for the convenience of the player. Elites in Halo: CE spoke a deep, warbling tongue. This was achieved by reversing the voice acting of David Scully. The ever-popular "Wort, wort, wort!" shouted by many Elites during gameplay is actually Sergeant Johnson’s famous "Go, go, go!" reversed and sped up.[45] The hissing-like language of the Jackals is actually the English language reversed. This, and the other Covenant languages (Drones, Hunters), have remained the same since Halo 2.

According to voice actor David Sobolov, who played Ripa 'Moramee in Halo Wars and Jul 'Mdama in Halo 4, the fictional language spoken by the Elites in Halo 4 was a "made-up language that was based on Japanese," that started out as being improvised by the voice actors. Except due to legal concerns, the voice lines and language were intentionally scripted instead. Because of the complexity of the fictional language, "it took almost ten minutes per line to record" and required extra time to record than usual.[46]

In Halo 5: Guardians, Sangheili hieroglyphics were inspired by Islamic, Mongolian, and Indian art, as well as Egyptian and Mayan hieroglyphics.[47]

A Covenant language was created by David Peterson, creator of the Dothraki language used in Game of Thrones, for Halo: The Television Series.[48] Peterson posts transcripts for the words and their translations in a series of posts on Archive of Our Own, accessible here.