This article is about the military role. For the species that filled this role within the Covenant, see T'vaoan. 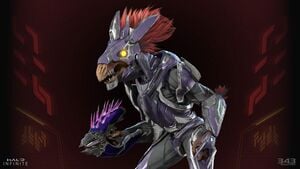 A Ruuhtian Skirmisher serving in the Banished.

Skirmisher is a role held exclusively by Kig-Yar warriors, most notably within the Covenant and Banished militaries. Within the Covenant military, the skirmisher role was held almost exclusively by the T'vaoan subspecies of Kig-Yar, but the mantle and practice of skirmisher has its roots in the ancient past the species as a whole.[1][2] Other Covenant remnant groups, such as the mercenary outfit led by Vata 'Gajat, have additionally made use of Skirmishers. 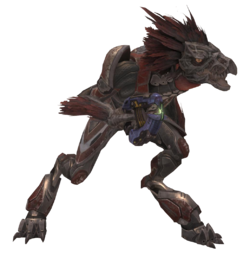 The role of skirmisher was created by the Kig-Yar long ago, seemingly even before the species even left Eayn to colonize other parts of their home system. After the Covenant discovered the Kig-Yar and grafted them into their empire, they kept the mantle of skirmisher as part of their military. During their time within the Covenant, most skirmishers would be T'vaoan, a unique subspecies of Kig-Yar that settled and evolved on the asteroid known as T'vao.[1][2]

After the Banished began conscripting the Kig-Yar into their military, they discovered that the practice of skirmisher extended beyond the T'vaoan legacy and into the ancient history of all Kig-Yar. Many Ruuhtians within the Banished took it upon themselves to demonstrate this by donning the battle armor and bearing the technological and aesthetic markings of the traditional skirmisher. The strongest and most skilled Banished skirmishers have proved to be every bit as deadly as their T'vaoan counterparts within the Covenant.[1][2] Still, the Banished continued to make use of T'vaoan skirmishers, with Escharum's forces deploying them to Reach during Operation: WOLFE in late 2559.[3] Escharum would again make use of skirmishers during the Battle for Zeta Halo, but only female Ruuhtian skirmishers have been known to be observed.[4]

Skirmishers are typically deployed as shock troops or in tightly confined choke points where they can use their superior mobility to outmaneuver their enemy.[1] Within the Covenant, Skirmishers were able to attain several ranks in the standard Covenant military rank system including Minor and Major, with the most combat-experienced of the latter drawn into the ranks of the Murmillones. Commandos served as special operations hunter-killer Skirmisher units, while Champions served as chief commanding officers over Unggoy and lower-ranked Kig-Yar.[5]

In deployment, Skirmishers are deployed as shock troopers or for the defense of critical choke points, using their speed to outflank, outmaneuvre or simply overpower an enemy infantry force.[2] While serving in the Banished, the best skirmishers are granted a level of autonomy and discretion which far exceeds other Kig-Yar.[1] Those serving with the Banished regularly make use of point defense gauntlets similar to those utilized by the Covenant's Murmillones.[6]