Carrow, referred to by the Sangheili as Rakoi,[4] is a planet and former human Outer Colony in a Joint-Occupation Zone. Following the Human-Covenant War, the planet was settled as a Sangheili colony, eventually acting as a home for both humans and Sangheili. 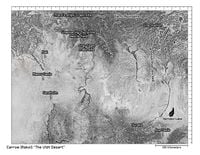 A map containing several locations on the Uldt Desert.

Carrow has one main landmass that comprises the majority of its surface. This continent boasts two primary centers of residence: Suraka and Rak, the centers of human and Sangheili governance on the planet, respectively. Between them stretches kilometers of desert. Rak is situated along a hidden river in the midst of this desert. One-hundred and forty kilometers from Rak lies Sandholm, a human settlement. Between them, at seventy kilometers from each, an oasis called Masov Oasis is controlled by Sangheili. 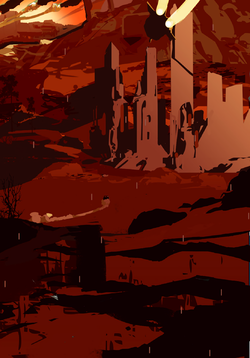 The desert on Carrow.

On Carrow, the Forerunners placed one of their Sharquoi hives, containing hundreds of thousands of the creatures. The hive was buried deep underground and could only be opened using the vertex, a control device for the Sharquoi hidden at Installation 00.

Carrow was originally much lusher and greener than it is now, but some sort of ecological disaster at an unspecified time caused rivers to dry up. Carrow was originally established as an Outer Colony of the Unified Earth Government. Its capital was Suraka, a city which began small in an oasis, though grew larger.

At some point during the war with the Covenant, Carrow emptied of colonists.

In the wake of the Great Schism, Rojka 'Kaasan, a Sangheili, assembled a fleet and fled to Carrow in order to establish a new home. The result was Rak, a city built up along the banks of a hidden river in the desert. The Unified Earth Government permitted the settlement and also facilitated the reclamation of Suraka by new human colonists. Carrow was deemed to belong to a Joint-Occupation Zone. Not long after, a creaky old human ship bearing fiercely independent migrant refugees of the Human-Covenant War set its sights on Carrow, and specifically the region where Rak had been established, since it was known from old records there was a river giving life to the desert there. Upon discovering the territory was already occupied by the Sangheili, and without any hope of getting their ship in the air again, the migrants endeavored to carve out a harsh life one-hundred and forty miles from Rak and called their new settlement Sandholm.

In September of 2558, as the Sangheili Fleetmaster Rojka 'Kasaan negotiated with the humans with the aid of UEG envoy Melody Azikiwe, his cousin Thars 'Sarov launched a coup aided by Jiralhanae led by Chieftan Hekabe. In the midst of the civil war, Melody awakened SPARTAN-II Gray Team from their cryo chambers onboard Rojka's flagship the Unwavering Discipline where they had been held since Rojka recovered the Spartans from the remains of Glyke. Recovering their old lifeboat, Gray Team escaped to the surface of Carrow with Melody and made for Gila Station, a secret ONI outpost on the planet while Rojka, having all but lost the battle, gave chase, ultimately crashing Unwavering Discipline in the Karfu Mountains.

Shortly afterwards, Hekabe betrayed Thars, destroying or disabling all of his ships while leading an attack on the human settlement of Suraka though Hekabe's fleet suffered heavy casualties in the process as well. In reality, Hekabe's purpose on the planet was to access the Sharquoi hive beneath Suraka and use the beasts as an army to crush his enemies and take over the galaxy. Having recovered the vertex during the Battle of Installation 00, it had taken six years for Hekabe to decipher it and locate the hive on Carrow. Under the command of Governor Ellis Gass, the Surakan Militia Volunteers managed to destroy Hekabe's flagship, the Varric-pattern heavy cruiser Foebane. Undaunted, Hekabe unleashed the Sharquoi upon the humans, who fled to the planet's oases while Hekabe's forces captured Thars' repaired vessels to leave the planet.

After a failed attempt to stop Hekabe from taking control of Thars' ships, Thars was killed by Rojka with the help of Gray Team, Melody and a few surviving Sangheili loyal to Rojka. To stop Hekabe, Ellis, a militia squad, Gray Team, Melody and Rojka teamed up together to assault the Sharquoi hive, Surakan engineers having created a makeshift EMP cannon that they believed would disrupt Hekabe's control of the vertex. Though they lost the militia members, the EMP worked long enough for Ellis to remove the vertex and take control of the Sharquoi for herself. Ellis had the Sharquoi kill Hekabe and destroy his captured ships, ending Hekabe's plan. Summoning all the Sharquoi back into the hive, Ellis allowed Gray Team and Rojka to flee in a Pelican dropship while she detonated a HAVOK tactical nuclear weapon in the hive, destroying it and the hundreds of thousands of Sharquoi within it, but also causing damage to Suraka from the shockwave.[3]

Following the defeat of Hekabe, Thars 'Sarov and the Sharquoi, Carrow was left without any sort of a defensive fleet and with both the humans and the Sangheili having suffered heavy casualties. Akato 'Dakaj took control of Rak, but recognized that they were left in a situation where both the humans and the Sangheili would need each to survive. Rojka 'Kasaan agreed to act as an envoy to the humans on Carrow, helping to forge a peaceful coexistence between the two sides.

Upon arriving at the planet, the UNSC frigate UNSC Welcome to the Snipehunt scanned the location of the former Sharquoi hive and determined that all the Sharquoi appeared to have been killed in the nuclear blast. However, the UNSC intended to keep an eye on the desert in case any Sharquoi escaped before the HAVOK detonated.[5]