A battle group of UNSC frigates firing their Magnetic Accelerator Cannons above Voi.

Frigate (hull classification symbol FFG) is a warship classification in the UNSC Navy. Although they do not possess the same degree of armor, armament, and firepower as destroyers, frigates are lighter and more maneuverable. They are also cheaper to produce, allowing greater numbers to be fielded against the Covenant.

During the Human-Covenant War, UNSC frigates were barely considered a match for even the smallest of Covenant warships. Their armor was susceptible to enemy point-defense pulse lasers and plasma torpedoes, and it is outfitted with substandard weaponry. Only en masse did the UNSC frigate give any UNSC fleet element an advantage against even inferior numbers of Covenant capital ships. By 2552, UNSC frigates designs became more technologically advanced as seen with both the Strident-class heavy frigate and the Anlace-class frigate.

The frigate's speed and maneuvering are its advantage, however, allowing UNSC frigates to provide fire support to other UNSC fighter craft such as Sabres or Longswords and engage both multiple enemy single ship fighters, such as Banshee interceptors or Seraphs, and light enemy warships simultaneously; its speed allows it to put down fire on an enemy ship while being able to avoid a large amount of fire from largely superior Covenant weaponry.[1] In addition to this, its small size and role as a troop carrier vessel make it ideal for supporting ground operations in planetside theaters of action, capable of laying down suppressive fire against Covenant ground forces while deploying its complement of aircraft and marines to bolster UNSC forces on the surface.

While details between the various classes of UNSC frigate vary, all share the same overall design and layout.

The bridge of the frigate is located in the uppermost part of the ship, in the section at the stern-most tip of the MAC gun shaft. The commanding officer's chair is located behind the two primary consoles within the bridge. There also are numerous other consoles located at the sides of the room. There are four bridge stations: Navigation, Operations, Weapons, and Communications. There are airlocks on both sides on the bridge.[2] Modern frigate classes are also equipped with universal hardpoints on their dorsal and ventral hulls, allowing them to dock with other UNSC vessels.[3] On top of the bridge is a maser dish for short-range communication.

The forward midsection of the ship has numerous single ship hangar bays for Pelicans or fighter craft like Longswords on both sides. A UNSC frigate also possess twelve SOEIV bays, located in the rear of the ship, which facilitate the deployment of Orbital Drop Shock Troopers. Also, spread throughout the frigate's structure are a number of its many escape pod bays.

Some frigate classes, namely the Charon-class, also have a large loading elevator in their rear section which is capable of extending out of the ship's ventral side to deploy vehicles or cargo directly to the ground.[4][5] The UNSC Forward Unto Dawn featured a large rear section which had the capacity of holding several Pelicans in addition to numerous ground vehicles. These hangar floor elevators have been seen operating in two different modes; the single-sided hinges on the elevator are able to swing down 90° in order to allow aircraft like Pelicans to drop vertically out of the hangar for quick deployment.[5] So far the frigate is the only UNSC warship that has been seen landing and deploying vehicles directly to the surface of a planet (or Installation 00 in the Dawn's case).

Like other human ships, the UNSC frigate is powered by thermonuclear fusion reactors which use deuterium (a stable hydrogen isotope) as fuel. The engines almost certainly use the energy obtained from this process to heat some form of reaction propellant which is expelled out of rear-facing exhausts to generate thrust. There are four exhausts visible on frigates; two large and two small. In addition, the frigate has two sets of forward maneuvering thrusters near the front.[2]

UNSC frigates are capable of hovering in an atmosphere and even landing. This is likely accomplished through the use of anti-gravity generators, although the technology involved has never been elaborated upon. Frigates are able to perform a Class-L flash-dock, a landing procedure used when time is of the essence which requires precise maneuvering control.[6]

For interstellar voyages, the frigate carries a Shaw-Fujikawa Translight Engine. 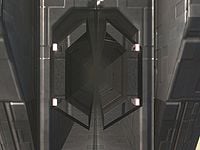 The MAC barrel on a UNSC frigate.

No precise figures are available regarding the crew of a frigate, although numbers have been speculated. Like larger ships, a detachment of Marines and possibly ODSTs would be present onboard. The crew number includes deck crews as well as the command crew, Marines, ODSTs, dropship pilots, and technical personnel. The number of personnel a single frigate is capable of housing numbers at least within the thousands.[9] Since many frigates have been seen in ground support roles, it is likely that the complement of Marine and ODST personnel on board is higher in percentage than other ships that are more dedicated to space combat.

In 2552 Sergeant Major Avery Johnson was supposedly able to singlehandedly control the frigate UNSC Forward Unto Dawn to aid Spartan John-117 and Arbiter Thel 'Vadam on the newly rebuilt Halo, though an auto-pilot function was available with the use of the ship's onboard navigational computer. An AI can monitor and regulate all critical functions without human intervention.

The armor of a frigate is relatively poor compared with that of its larger cousins and counterparts such as the UNSC destroyer, with only 60 cm of titanium-A battle plate. However, due to its relatively light weight, the frigate's strength lies instead in maneuverability and speed. The frigate's relatively wide design is supported by structural support ribs, allowing it to perform orbital incursions. As of 2558, certain frigates (namely, the UNSC Infinity's ten Strident-class sub-vessels) possess energy shielding technology.[10]

The Navy uses multiple frigate classes. Though they vary in size, armament, and purpose, they all follow some of the same design principles.