The Epsilon Eridani Fleet[2] was a United Nations Space Command fleet in charge of protecting the colony world of Reach, as well as the rest of the Epsilon Eridani system. It was one of the largest known fleets in the UNSC Navy, but saw near-total destruction at the hands of the Covenant Fleet of Particular Justice during the Fall of Reach and Tribute, respectively.[3][4]

The fleet was first established sometime after the colonization of Reach and the surrounding worlds. It was continuously built up and constructed for the century that followed. By 2552 fleet numbers had risen drastically, with over 100 to 150 warships in-system at any given time.[citation needed] Battle Group Leviathan was a part of the Epsilon Eridani Fleet. 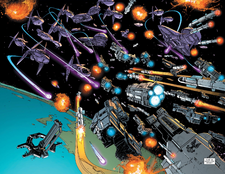 The Epsilon Eridani Fleet engages the Covenant Fleet of Particular Justice in orbit over Reach.

Following the aftermath of the Battle of Sigma Octanus IV, the Covenant had discovered the location of Reach and soon attacked the planet, sparking the Fall of Reach. On July 24, the Fleet of Valiant Prudence, a Covenant advance force spearheaded by the Sh'wada-pattern supercarrier Long Night of Solace, made an incursion on the planet. There were few vessels available to engage the Covenant in this timeframe; sixty percent of the fleet had to be recalled to Reach on August 13, with the reinforcements not expected to arrive for two days. This delay led Spartan NOBLE Team and the UNSC Savannah to attack the supercarrier in Operation: UPPER CUT, which destroyed the both Long Night of Solace and the Ceudar-pattern heavy corvette Ardent Prayer.[5]

Despite the colossal battle being waged throughout the Viery Territory, the Office of Naval Intelligence kept the invasion secret from military personnel and civilians on the far side of the planet.[6] The Covenant's final and combined invasion force was first detected by Fermion Remote Scanning Outpost, which continued to warn all UNSC forces in-system of the new threat.[7] There were only about 100 ships at Reach at the time, which moved into defensive positions to defend the planet; the 52 vessels remaining elsewhere in the system (likely engaged at Tribute) were recalled to Reach.[8] A large nuclear mine field had been set up to detonate the Covenant fleet, which destroyed roughly one hundred enemy ships.[8] The opening salvo of Covenant plasma rounds were mostly blocked by three refit stations, letting the fleet fire their first MAC salvo unharmed. When the Covenant fired again however, a crushing 80 UNSC ships were destroyed.[8] 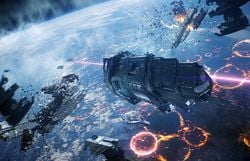 The Pillar of Autumn escapes Reach, surrounded by the wreckage of Defense Fleet vessels.

The remaining UNSC ships regrouped with the reinforcements to defend the orbital platforms, but the Covenant began sending hundreds of dropships to the surface of Reach, accompanied by several cruisers to destroy the orbital defense generators. They also used an unidentified vessel to snipe the ships of the fleet which were unable to destroy it. It was able to also avoid rounds from the Super MACS. Finally, the Pillar of Autumn destroyed the supercruiser in an intense battle, but the Autumn was severely damaged and too much of the fleet was destroyed as well as the generators on the ground being destroyed for it to make much of a difference. Despite strong defense from UNSC ground forces, the Covenant managed to push through and destroy the generators, letting the remnants of the Covenant fleet move in and glass Reach, destroying the UNSC stragglers.[3]

Only a handful of ships escaped Reach, most of which were badly damaged. The known survivors were the severely damaged Pillar of Autumn which was later destroyed in the Battle of Installation 04, an ONI prowler which witnessed the battle and its aftermath and fled, and the UNSC Gettysburg which was later salvaged to help the survivors of this battle and the Battle of Installation 04 return home. After the Covenant glassed Reach, they advanced on the other in-system colonies, including Tribute.[citation needed] The initial space engagement over Tribute was a short one, with only a fraction of the original fleet there to defend it. The fleet suffered ninety percent losses and Tribute was partially glassed.[9][10]