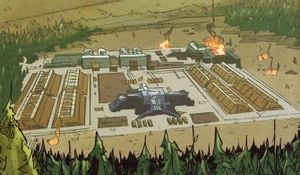 Prior to the Fall of Reach, Reach had seven ODG facilities to power twenty ODPs. As demonstrated during the battle, ODGs were vulnerable to ground assault, and the failure of UNSC ground forces to protect the power plants and the resulting nullification of the planet's ODPs was a major factor in the battle's outcome and resulted in the loss of Reach. These fusion reactor complexes allowed the orbital guns to sustain a rate of fire of one round every five seconds.[1][2]