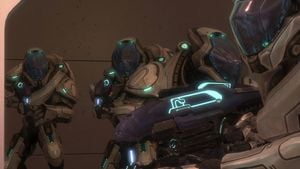 The Covenant's Rangers were the most visible element of Fleet Security - quite literally, given their Stealth counterparts' usage of active camouflage technology.

Fleet Security was a division of the Covenant empire's Special Warfare Group (SWG), tasked with the security of a fleet.[1][2] Although the division ceased to exist with the collapse of the empire in late 2552, its structure was at least carried on in some form by the Covenant separatists in the immediate postwar weeks, with the Fleet of Retribution continuing to assign troops to its local Fleet Security roles throughout the conclusion of the Human-Covenant War.[3][4]

Fleet Security was one of the major divisions of the Special Warfare Group, and like Home Security, often worked closely alongside Covenant Special Operations.[5] Fleet Security oversaw a number of specialised Sangheili special warfare forces. Of particular note, these included the Rangers and the Stealth forces.

The Rangers served aboard Covenant starships as specialists in microgravity combat and extra-vehicular activities, and often made use of specialised antigravity packs and vacuum-rated combat harnesses. They were occasionally deployed in planetary warfare to make use of their enhanced mobility.[2] Stealth units, on the hand, served as an offshoot of the Special Operations Officers of Covenant Special Operations and were outfitted similarly. Unlike SpecOps personnel however, Stealth operatives were not intended to participate in independent special operations initiatives but were instead placed in regular Covenant military units to serve as noncombat reconnaissance and intelligence-gathering personnel.[6][7]

Select Stealth operatives holding the rank of Major may be drawn to serve as an Ossoona[6]; a special field operative working as a direct agent of the Hierarchs.[7]