This article is about the various space-worthy ships of the Covenant Empire. For the cut Halo 2 level, see Covenant Ship. 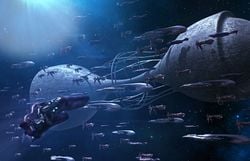 Many different classes of Covenant starships in front of the Unyielding Hierophant.

Covenant starships are the ships used by the species of the Covenant through its various ministries.

Covenant Starships have been known to be grouped in multiple ways. These include Fleets, Battle Groups, and Flotillas.

Different species have different design philosophies for starships. The Sangheili preferred starships that echoed the aggressive nature of various animals from Sanghelios and other Sangheili colonies. The San'Shyuum preferred more ornate designs, something that carried into the Covenant, as well as preferring multi-role vessels.[3]

Covenant starships, like most Covenant technology, were constructed using the Design pattern method.[4] Some manufacturers of Covenant starships include Forgemasters of Tanus, Gorgon Assembly Vault[5] and Lathe of the Enlightened.[6]

The hull of Covenant starships is composed of the durable and heat resistant Nanolaminate.[8] Most Covenant ships also make use of Energy shielding to prevent damage from affecting the hull.

An energy projector slicing through the Feeling Lucky.

Covenant warships often had Energy Projectors. An energy projector is a large beam of plasma which can be used to devastating effect in either ship-to-ship combat or in ground operations.

In ship-to-ship scenarios, they are known to slice through UNSC ships. The UNSC Herodotus[9] and the UNSC Feeling Lucky[10] were two ships to fall prey to its destructive power.

Often during ground campaigns, it was used in a method called glassing, whereby a Covenant starship burns the surface of a planet in order to render it lifeless.

Plasma turrets on the side of the Ardent Prayer.

Covenant warships also used a variety of turret emplacements. This includes the Plasma turret and the Pulse laser turret.

Covenant starships also make use of the Plasma Torpedo.

Several types of space fighters were used in conjunction with larger ships. These include the Tarasque-class heavy fighter and the Gigas-class fighter-bomber, it's replacement, the Type-31 Exoatmospheric Multi-role Fighter, and the Elsedda-pattern Banshee.

Type-52 "Phantoms" picking up troops in a hangar bay.

San'Shyuum starships during the War of Wills.

Millenia prior to the forming of the Covenant, the San'Shyuum were a spacefaring civilization, allied with humans.[11]

Prior to joining the Covenant, in a time known as "The Former Age", the Sangheili had developed their own spaceships.[12] This included the Hekar Taa-pattern blockade runner, the Rwaru-pattern carrack, R'sikosh-pattern man o' war, and the Lursu-pattern brigantine.[3] In the case of the R'sikosh-pattern man o' war specifically, it was built using information Forerunner artifacts far before the War of Beginnings.[12]

The San'Shyuum also piloted their own types of aerospace craft.[13]

A number of starships were designed following the signing of the Writ of Union. The Useumru-pattern voidpiercer was one of the first spacecraft developed by the Covenant empire between 852 and 850 BCE.[14] The Varric-pattern heavy cruiser was designed during the earliest Age of Conflict and Age of Doubt .[15] Another ancient ship was the Maugen-pattern armored cruiser.[16]

Several different classes of Covenant starships during the Human-Covenant war.

One of the first engagements prior to the outbreak of the war was the Skirmish on Minor Transgression.

"Every vessel counts. We can't yet replace what we lose, so the war against the Arbiter and the other blasphemers may be won or lost on a single hull."
— Shipmaster Avu Med 'Telcam of the Servants of the Abiding Truth[17]
Main article: Post-Covenant War conflicts

With the Covenant war over, and the Schism breaking into a multitude of conflicts, Covenant ships began finding themselves in the hands of a number of remnant factions, like the Jul 'Mdama's Covenant, Merg Vol's Covenant, Rojka 'Kasaan's faction, Servants of the Abiding Truth, Swords of Sanghelios, and the Banished.

The Covenant have operated a number of support starships. These include the Akton-pattern escorts and the food providing Mjern-pattern agricultural support ship. 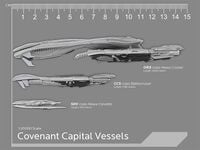 A comparison of different ship classes and their sizes.

The Covenant operated a number of lighter capital warships. These include some of the smaller Covenant cruisers, like the Ket-pattern battlecruisers and the Zanar-pattern light cruisers. As well as the various corvette, frigate, and destroyer classes the Covenant operated.

The Covenant were known for their larger capital ships including the Maugen-pattern armored cruiser, the Varric-pattern heavy cruiser and the Kewu-pattern battleship. On top of this, they operated various large carrier classes. Finally, they were known to use heavily armed battleships.

Covenant ships were not exclusively designed for war and often operated in a number of non-warfare based situations. This can include the Missionary ship, operated by the Ministry of Tranquility.[18] The Covenant also operated a number of tithe fleets, which were often filled with Sangheili Lursu-pattern brigantines.[3]

During the development of Halo 2, a level was planned to take place on board a Covenant ship.