Song of Retribution, informally referred to as the Song or the Retribution,[3] is a CAS-class assault carrier and the personal flagship of Jul 'Mdama, leader of one faction of the Covenant remnants.[1] The vessel is a particularly powerful example of the CAS-class, which exhibits some internal variation.[4]

Song of Retribution and 'Mdama's Covenant fleet surrounding the UNSC Forward Unto Dawn.

The Song of Retribution came into Jul 'Mdama's possession following the formation of a new faction of Covenant on Hesduros in 2553 and was chosen by 'Mdama to serve as his personal flagship. In 2554, 'Mdama and his followers discovered Requiem in the Epoloch system. Over the next three years, the Covenant tried to enter the planet, without success. The Song of Retribution remained in orbit over the planet during this time. In July 2557, the Covenant detected a human vessel heading to the planet. 'Mdama ordered his troops to board the ship and keep the humans away from Requiem.[5] They were unsuccessful as both the Forward Unto Dawn and many nearby Covenant ships were pulled into Requiem.[6] However, the Song of Retribution survived and presumably continued to serve as 'Mdama's command ship during the Battle of Requiem.

Six months after the Didact's attack on Earth, the UNSC Infinity returned to Requiem and engaged Jul 'Mdama's fleet, igniting the Requiem Campaign. Although the Song of Retribution was present during this battle, it did not participate in any of the actual fighting. Towards the end of the battle, 'Mdama put Requiem on a collision course with its sun and returned to the Song of Retribution, along with Doctor Catherine Halsey. The Retribution and the remainder of Jul's fleet then fled the system.[7] 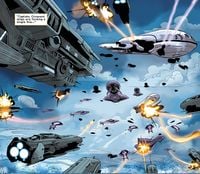 The carrier battled UNSC Infinity and her Strident-class heavy frigate sub-vessels over the planet, alongside Breath of Annihilation and smaller Covenant cruisers. After Halsey retrieved 'Nyon's half of the Janus Key from a defector among his forces, she attempted to return to Song of Retribution. However, Halsey and her Zealot escorts were attacked by Spartans Sarah Palmer, Gabriel Thorne, and Naiya Ray. After a brief engagement, Halsey managed to escape the Spartans and 'Mdama had a Phantom escort her back to Song of Retribution. With both halves of the Janus Key under their control, 'Mdama and his forces fled the system.[9]

The Song of Retribution arrives at the installation.

Using the now-complete Janus Key, 'Mdama's fleet attempted to pinpoint the location of the Absolute Record, a repository of Forerunner information. On September 15, 2558, while within the Urs system, Doctor Halsey believed she discovered the Absolute Record's location while analyzing the Janus Key aboard Song of Retribution. When Song of Retribution and the rest of the fleet departed for the Absolute Record's apparent location, they discovered an apparently artificial gas giant with a slipspace portal leading to their true destination. However, slipspace ruptures suddenly destroyed two cruisers within the fleet and heavily damaged Breath of Annihilation.[10] While 'Mdama and Halsey decided their next course of action, a five-man team—consisting of Spartans Palmer, Thorne, Tanaka, Dr. Glassman, and ONI operative Ayit 'Sevi—who had infiltrated Breath of Annihilation were forced to abandon the damaged carrier and travel to Song of Retribution in a Phantom. 'Mdama decided for Song of Retribution to enter the portal to the Absolute Record alone while Breath of Annihilation makes emergency repairs at a nearby moon. As Retribution transferred its prisoners to Annihilation, 'Sevi and Thorne returned to the damaged carrier to give them a better chance at re-establishing contact with the UNSC while the rest of the team remained aboard Retribution to stop 'Mdama and Halsey.[11]

On September 18, 2558, Song of Retribution traveled through the portal and arrived at the Absolute Record's exterior, where the carrier was observed by the installation's Contender-class artificial intelligence, who detected the humans aboard the ship.[11] While attempting to enter its interior, Retribution's suddenly lost control of the carrier as a slipspace portal formed nearby. Forced through the portal, Retribution arrived inside a large chamber and was halted in place by a gravitational anchor; Halsey and 'Mdama decided to use this opportunity to travel down to a lower platform. Meanwhile, while Kig-Yar in a hangar bay begun breaking down damaged vehicles to use their materials to repair the carrier's damaged hull, the Spartans and Glassman in the same hangar waited for their chance to leave their position and exit the carrier. Halsey, 'Mdama, and a contingent of Zealots traveled down to the platform and encountered the AI. Confused as to why there was humans hiding aboard Retribution, the AI had its Sentinels extract the Spartans and Glassman from within the carrier and brought to the platform. When an impatient Zealot attacked a Sentinel, a fight broke out and the AI removed the floor under all the Sangheili's feet, with 'Mdama barely surviving with the rest of the humans.[12] To prevent further intervention from 'Mdama's forces, the AI encased Song of Retribution in an energy shield.[13]