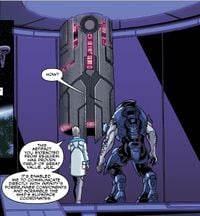 This artifact was a Forerunner device that was located on the shield world Requiem.[1]

At some point between July 2557 and February 2558 the artifact was acquired by Jul 'Mdama and his followers before Requiem was sent into its sun.[1]

In attempt to retrieve the other half of the Janus Key from the UNSC, Jul 'Mdama's forces attacked the human colony of Oban, luring the UNSC Infinity to his location. After the battle Infinity made a slipspace jump towards Galileo II base. However the Infinity immediately exited slipspace directly into an asteroid field. The Infinity jumped back into slipspace but was forced back out a quarter of a kilometer of her last position. Dr. Catherine Halsey explained to 'Mdama that the artifact allowed her to communicate with the Infinity's Forerunner components, including her slipspace drive, and stranded them in the system. 'Mdama told Halsey his lieutenants called for her head after the failed attack on Oban, but Halsey explained to him that the attack was only a bold move to attract the Infinity near the artifact in order to be able to connect the artifact and Infinity's drive. Halsey then explained to him that they will not need to invade the ship to retrieve the other half of the Janus Key, as it will be Infinity's crew itself who will give it to them.[1]