Oban is a mountainous moon of Mull in the Visper system and a human Inner Colony of the Unified Earth Government.[1][2]

After the Human-Covenant War, the United Nations Space Command discovered Oban and colonized the moon in 2553 as an Inner Colony. Oban was originally intended to serve as an UNSC stronghold with an expansive military presence and dozens of research facilities,[1] however Oban instead became home for millions of human refugees who settled in makeshift camps across the coastal regions of Saviron.[1][3] Some of these refugees came from New Mombasa.[4] Many of Oban's refugees were used to rich and manicured lifestyles on their lost homeworlds, but have been forced to live a bleak existence at salvage and waste processing sites. Overtime, Oban's colonists have seen considerable improvements.[1]

The UNSC Navy maintained a presence on the moon, using it as a staging ground for a number of highly classified military exercises, including Operation: DAYBREAK, located in the highlands of Saviron.[5] In early 2558, Operation: WHITE VAN was conducted on Oban regarding the oversight and security of Misriah Armory's Project: SENIOR ICE.[6] At some point before March 2558, Daniel Clayton of the New Colonial Alliance acquired several AC-220 Vultures and AV-22 Sparrowhawks from a sale on Oban.[7]

On July 16, 2558, Oban was attacked by Jul 'Mdama's Covenant and his Promethean allies. The attack was advocated by Doctor Catherine Halsey, who believed that a bold move would attract UNSC Infinity. As Halsey predicted, Infinity was deployed to the moon and Commander Sarah Palmer led a joint Spartan-UNSC Marine operation in response to the attack. The UNSC eventually repelled the attack, and only minor damage was inflicted upon a new power station halting the colonization of the moon. However, Jul's Covenant attacked Oban just to lead Infinity into a trap.[8] 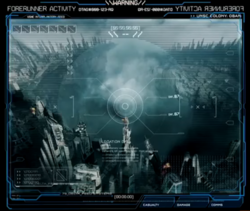 The destruction caused by the Guardian.

On October 17, 2558,[9] a Forerunner Guardian on Oban was activated and sent to Genesis by the Created, inadvertently taking a UNSC Marine patrol along with it.[10] Oban, along with Conrad's Point, Ursa IV, Queen Anne VI, and Adelaide, was one of the first five colonies in a 72 hour period that saw such an event. The Guardian's activation caused widespread destruction and numerous casualties on the moon.[11]

Oban's vast continent of Saviron is home to a highlands region of mountains interspersed with high-altitude grassy terrain.[3] By late 2558, at least one large city was located on the moon before much of it was destroyed during the Guardian's activation.[11]

It is likely the moon is named after the Scottish town Oban.