The AC-220 Vulture is a heavy gunship used by the United Nations Space Command during the Human-Covenant War. It is the preferred aerial combat vehicle during prolonged air-and-ground engagements, particularly against heavily fortified enemy strongholds.[3]

The Vulture is the largest combat aerodyne currently fielded by the UNSC.[2][4] It acts as a "flying tank", boasting two twin medium-GAU-23/AW/Linkless Feed Autocannons, two top-mounted Argent V missile launchers and two rows of four A-74 Sylver Vertical Missile Launchers, each boasting a single Anvil-IV air-to-surface missile.[3][5] Additionally, the Vulture carries a single Phoenix tactical missile.[4] The combined ANVIL and Argent missiles are specifically tailored to unleash a unified barrage on a given target, allowing it to overwhelm heavy armor and shielding.[3]

Unlike most smaller UNSC craft, the Vulture is suspended in the air by a series of ducted fans visible near the rear of the aircraft, housing jet engines like the D77-TC Pelican. Due to its much larger mass and cross-section, it is slower than other UNSC aircraft, such as the AV-14 Hornet and the AV-22 Sparrowhawk.

The Vulture requires a large number of highly trained UNSC pilots and gunners to operate servicing a crew of six.[2] This makes them expensive to deploy in terms of personnel (as opposed to the Sparrowhawk and Hornet, which require a single pilot and possibly a copilot). It lacks radiation shielding, preventing it from traveling in space.[3][6] Despite this, they have some level of spaceflight capability, and are typically deployed directly from an orbiting warship to the ground.[7] 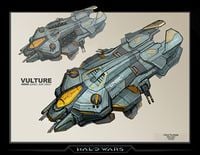 An early prototype of the Vulture.[3]

The Vulture's core attributes of design can be traced back to the older AC-47, AC-119, AC-130, and AC-163 gunships.[2][3] The Vulture's flying tank-like design was conceived in 2498 to curtail the spreading Insurrection in the Outer Colonies.[3] By 2545, few Vultures remained in service against the Covenant due to irreplaceable combat losses. By 2557, the Materials Group was considering the possibility of restarting production of the Vulture with the benefit of incorporating new technologies and applying improved materials.[8] During the Second Ark Conflict, AI Isabel's upgrades and logistical expertise was able to dramatically simplify Vulture production and maintenance.[4]

The AC-220 Vulture was used during both the Insurrection and Human-Covenant War. In 2531 the crew of the UNSC Spirit of Fire used several Vultures during the Battle of Trove against the Covenant, Flood and Sentinels.[7] Following the Human-Covenant War, few Vulture gunships remained in service with the UNSC Armed Forces due to irreplaceable combat losses by 2545.[8] By April 2553, the Insurrectionists on Venezia had acquired several Vultures and hid them in the old sandstone quarry next to Mount Longdon Road for use by the Venezian Militia.[9] On March 11, 2558 several AC-220 Vultures belonging to the Spirit of Fire, alongside multiple AV-22 Sparrowhawks, attacked the UNSC Infinity when the Pilgrims' Pride was pulled into the Infinity's docking bay.[10]

In 2559, the Spirit of Fire continued to employ Vulture gunships in the Second Ark Conflict.[11] After receiving coordinates for a supposed Keepers of the One Freedom and Covenant loyalist rendezvous point, three Vultures were dispatched from the Spirit of Fire. The Vultures engaged ten landed Seraphs, with nine being destroyed before they could escape. However, it was quickly discovered that the Seraphs were not Covenant Seraphs, but rather Banished Seraphs. Castor had simply been using the UNSC to get rid of some of his pursuers.[12]

In-game, the Vulture is considered an "über unit", and is constructed at the airpad, and requires six population, 900 resources, and a tech level of four. It can be upgraded with the Mega Barrage upgrade, potentially doubling its barrages' power; this upgrade is purchased at the air pad and costs 800 resource points and requires a minimum tech level of 4. For balance, the Vulture is one of only two vehicle units in Halo Wars that cannot be commandeered by Spartans, the other being the Covenant Scarab. The Vulture is the only air unit that is not immobilized by a single Vampire's stasis drain, though it is still damaged and can be immobilized by multiple synchronous drains.

The Vulture is a slow unit which can take massive amounts of damage before destruction. It is able to fight against both air and ground units due to its weapon configuration: Argent V missile pods are used against enemy aircraft, while GAU-23 autocannons are designed for engaging ground targets. It can use its A-74 missile launcher to launch several Anvil-IV air-to-surface missiles and deliver massive damage to slow and/or static units. The Vulture's main drawbacks are its cost and the large amount of time it takes to build one; it is also vulnerable to fast counter-attacks and takes a great deal of time to repair. The Vulture should be reserved for buildings and ground units for the greatest effect. Although Vultures possess adequate anti-aircraft ordnance, they should be escorted by M9 Wolverines to lessen the threat of aerial attacks.

The Vulture can be built at the Airpad by all UNSC leaders. Unlike its Halo Wars counterpart, the Vultures in Halo Wars 2 can be hijacked by Spartans, as the G81 Condor is now the UNSC's only Super Unit. Its barrage has been replaced with a "Phoenix missile", a large, powerful thermobaric warhead that does massive damage. It is effective against vehicles, aircraft, and structures, while only being moderately effective against infantry. In Blitz, Vultures costs 140 energy.

In the campaign, the Vulture starts to appear in the mission The Foundry, and is given in Last Stand as part of the fifth batch of reinforcements.