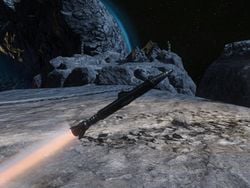 "These missiles are specialized to target and deliver their warhead to an aircraft with great speed and maneuverability. The missile pods are quite large and can be reloaded via a mechanical system in the Wolverine, which stores a small supply of missiles on board."
— halowars.com description

Franklin Mendez was known to mount a rack of these missiles on his personal Warthog, back when he was training the SPARTAN-II's on Reach as a Chief Petty Officer.[5] Ilsa Zane was also known to operate a similarly-modified vehicle.[2]