Anthony Madsen was born October 19, 2530 on New Llanelli. He served an undistinguished career as a Marine before being admitted into the SPARTAN-IV program because of the recommendation of his father and grandfather, both being generals in the Marine Corps.[1]

Sometime before February 8, 2558, Madsen and the rest of Fireteam Majestic, minus Gabriel Thorne, were deployed to the city of Rio de Janeiro to eliminate or detain former Covenant seeking asylum on Earth.

Madsen (left) and Grant in a firefight on Requiem.

In 2558 Fireteam Majestic was assigned to the UNSC Infinity.[3] After Infinity arrived at Requiem, Fireteams Crimson and Majestic were sent north of the UNSC's area of operations on Requiem in order to shut down Forerunner power generators. Upon reaching their location, both Crimson and Majestic had their long-range communications jammed by Forerunner jamming devices. After deactivating the jammers, their mission continued. Initiated by Palmer, the mission turned into a competition for the fireteams as to who could complete their mission objectives first. Majestic temporarily took the lead at first, but were eventually beaten.[4]

Sometime later, Fireteam Majestic was being engaged by Promethean Crawlers; they were eventually victorious with Madsen killing the last one. He started to complain about their ability to "pop up" anywhere, stating that it was an unfair advantage, when a Promethean Knight teleported into the area and shot him in the shoulder.[5] He quickly recovered, with his shields taking the blunt of the attack.

When Dr. Catherine Halsey was brought aboard the ship to examine the Forerunner artifact, he and DeMarco were assigned to guard her alongside Commander Palmer. On the way to the engine room, DeMarco questioned why they needed to guard an "old lady". Madsen informed him of Halsey's role in the SPARTAN-II program, calling her a "mad scientist" and that she kidnapped children to train them as soldiers, much to the disbelief of DeMarco. After the artifact reacted again as Halsey interfaced with the engine room controls, Madsen along with Palmer and DeMarco raised their weapons on Halsey, but eventually lowered them.[6]

Later, Madsen and the rest of Majestic were sent to recover the "Didact's Gift" from Galileo Base, Madsen complained that they never get they interesting jobs, all the while being Crimson's "delivery service", with Grant scolding at him for his seemingly incessant rants. Shortly after breaking cover, he and the rest of the team are pinned down by Covenant air support. DeMarco decided they should make a run for the Pelican, Madsen told him it would be suicide. Thorne quickly hijacked a low-flying Banshee and subsequently destroyed a nearby Phantom, allowing them escape with the artifact.[7]

After Thorne went missing the rest of Majestic were sent to go look for him in Requiem. They arrived just as Gek 'Lhar was about to kill Thorne, together with Dr. Glassman (who also went missing), after the two were ambushed by Gek. DeMarco killed the Elite and saved Thorne, with Madsen stating that they have been looking everywhere for him. Upon seeing Thorne give DeMarco an energy sword and Thorne retrieving Gek's personal active camouflage module for himself, Madsen decided to loot something for himself. He picked up a small device and activated it, revealing a map of Requiem, much to his displeasure.[8]

When the Pelican arrived for their evac, they were met by a life-size hologram of Captain Thomas Lasky, he asked them to rescue Dr. Halsey from Jul 'Mdama, who was abducted during the attack on Infinity. When they arrived at Halsey's location Madsen took position above the Elite guards and waited for Thorne to give the signal to attack. When he did, DeMarco enaged the Elites with his newly acquired energy sword, while Hoya, Grant, and Madsen attacked from above. Madsen and the rest of Majestic showed up to help Thorne just as Promethean knights translocated into the area and engaged them. Madsen used his sniper rifle to take out several knights in a row. Jul managed to escape with Halsey, just as Thorne and Palmer closed in on him.[9]

Sometime later, along with Commander Palmer, Majestic was ordered to deactivate one of the two slipspace artifacts still on Requiem, while Crimson deactivated the other. Before they left they witnessed the departure of the Covenant fleet fleeing Requiem. When Requiem began to move towards the local star Palmer hurried them toward the artifact.[10] Madsen and the others faced significant Covenant resistance in deactivating their device. Shortly after Crimson deactivated their artifact, Majestic eliminated the last of the Elites defending the last artifact and deactivated it. They evacuated and arrived aboard Infinity at the same time as Crimson, allowing Infinity to escape just in time.[11]

At some point, Madsen had loaned DeMarco his grandfather's adventure book and insisted that he read it. However, DeMarco never got around to reading it and was later killed during the Battle of Ealen IV. Prior to his death, he had asked Commander Palmer to return the book to Madsen and tell him something that seemed like he had read it.[12]

On March 11, six days after DeMarco's death on Ealen IV, Infinty arrived in the Artesia-702 system having received a distress signal from the damaged freighter Pilgrims Pride. When an ambush was sprung, Fireteam Majestic was deployed along Fireteams Colossus and Fenrir to repel attack and prevent the freighter from self-destructing on the Infinity. Leading the fireteams, Thorne ordered teams Colossus and Fenrir to secure the ship while Majestic made their way to the core. As the Spartans advance through the freighter, they encountered automated defense turrets but Madsen was able to swiftly destroy them with his rifle. With the enemy going into retreat, the freighter was tugged out into space, where Grant ejected the ship's core before it exploded. The Spartans survived the detonation and requested pickup.[13] 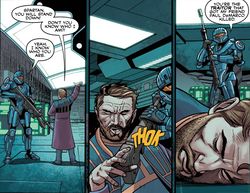 Madsen knocking Clayton out with the butt of his sniper rifle.

Following the attack, Infinity learned that the assault crafts from the freighter belonged to the long-lost UNSC Spirit of Fire. Roland discovered that the freighter was launched near Oth Lodon, a gas giant located deep in Jiralhanae space. With the Spirit's possible location found, Lord Hood authorized Commander Palmer to conduct a search and rescue mission. Equipped with OF92 Booster Frames, Fireteam Majestic and Palmer scouted the planet's system. Madsen was thrilled during the expedition, pushing the limits of his booster frame. When asked by Thorne to restrain himself, Madsen retorted that Palmer was in command, at which point Palmer told him to obey his team leader. Exploring the system's asteroid field, the Spartans came across not the Spirit of Fire but instead a Covenant station under control by New Colonial Alliance insurgents.[14]

After the station opened fire on Infinity and disabled the ship, Palmer and Fireteam Majestic used Booster Frames to board the station, whereupon arrival Madsen opened the door leading inside. When the Spartans secured the bridge Palmer ordered everyone to freeze. Daniel Clayton told them not to listen, asking the Spartans if they knew who he was. Madsen responded saying he knew who he was and hit Clayton with his sniper rifle for being responsible for DeMarco's death, knocking Clayton out. The Spartans then turned their attention to Vata 'Gajat, who was preparing to assault the crippled Infinity. With the station's cannon back online, they fired on 'Gajat's flagship, destroying it and saving Infinity.[15]

Majestic is briefed about the mission.

On May 9, 2558, Naiya Ray and Thorne were assigned, separately from the rest of Majestic, on a secret mission to capture a Sangheili in possession of a mysterious bioweapon on Ven III. After communications with both Spartans were lost,[16] Fireteam Majestic was deployed to rescue them from the Kig-Yar pirates based on Ven III, with Palmer assuming command of the team in the absence of Thorne. Upon arriving at the pirates' base, Majestic and Palmer took out several Kig-Yar pirates. After receiving notification of Thorne's location by Ray, Palmer was going to redirect Majestic to Ray to help her retrieve the bioweapon but Ray shut off her locater to force them to rescue Thorne instead. Majestic eventually found Thorne and returned him to the Infinity.[17]

After Infinity was trapped near the uncharted world of Aktis IV on July 19, 2558, Madsen was deployed to the planet's surface alongside the rest of Majestic, with Palmer once again assuming tactical command of the team. On a forested island the Spartans discovered and secured a Forerunner structure after defeating a group of Covenant forces, and Dr. Glassman was brought in to investigate. Shortly afterward, Jul 'Mdama's Covenant launched a surprise assault against the Spartans and they became trapped in the structure. However, Glassman was able to activate the facility's teleportation grid. Spartan Grant was tasked by Palmer with taking a Spartan splinter team and Glassman through a portal to the other side of the island while Palmer, Thorne and Ray translocated to another location. Upon exiting the portal Grant's team were almost killed by friendly fire from Mantises that Infinity had deployed against the Covenant forces.[18] The battle eventually concluded with Jul 'Mdama attaining both halves of the Janus Key and leaving the system while the Spartans returned to Infinity.[19]

The eldest member of Fireteam Majestic, Madsen served as DeMarco's de facto second-in-command; he and DeMarco were also particularly close friends. As a Spartan, he strives to salvage his previously unremarkable military career and secure his legacy despite being admitted to the program purely on the basis of nepotism.[1] He has a sense of humor even in combat, commenting on how "unfair" it was that Prometheans could teleport wherever they wished and jokingly complained about how he got a map off Gek's dead body while DeMarco and Thorne got an energy sword and cloaking device respectively. However, Madsen possesses a serious and even vengeful side as well, lashing out against his newly appointed team leader Thorne in a training exercise in a fit of rage over DeMarco's death and knocking out Clayton personally due to him organizing the attack that claimed his close friend's life. He also was disrespectful of Thorne to some extent after the latter was appointed as team leader, although this may have been due to grieving over DeMarco's death. Madsen did later invite Thorne to a poker game in competition to win Gek 'Lhar's energy sword that DeMarco had taken from him on Requiem. He also tends to discuss with his Spartan partner Tedra Grant.

Madsen wears the Recon variant of the MJOLNIR GEN2 armor with equipped with VISR 4.09. He carries an SRS99-S5 AM sniper rifle.[5]