Grant was born November 4, 2533 on Arcadia, which had been briefly invaded by the Covenant only two years earlier. During her childhood, she was friends with Jordan Gaines.[3] On September 9, 2549, when she was 16, she was on Arcadia during the planet's fall.[4] Grant joined the UNSC Navy at a young age as a military police officer[5] and was later accepted into the SPARTAN-IV program after its inception. Her athleticism and combat skills gained her placement in an operational division in which she field-tested early versions of MJOLNIR GEN2. She was soon given an active role as a Spartan and was eventually assigned to Fireteam Majestic.[1]

At some point prior to February 6, 2558, Grant and the rest of Fireteam Majestic were deployed to Rio de Janeiro.[6]

Grant (right) and Madsen in a firefight on Requiem.

Grant was assigned to UNSC Infinity along with Fireteam Majestic on February 6.[6] After Infinity arrived at Requiem, Fireteams Crimson and Majestic were sent north of the UNSC's area of operations on Requiem in order to shut down Forerunner power generators. Initiated by Commander Palmer, the mission turned into a competition for the fireteams as to who could complete their mission objectives first. Majestic took the lead at first but were eventually beaten.[7]

Shortly later, Grant and Majestic were involved in another engagement against Promethean Crawlers and Knights. After Hoya was injured they returned to Infinity.[8] Later, during Crimson and Majestic's pursuit of Jul 'Mdama, Grant figured out that Covenant forces had been able to escape using portals, allowing Crimson to pursue 'Mdama through a portal.[9] Majestic was then deployed to Galileo Base to retrieve the "Didact's Gift" from the area after Crimson had defended it from a Covenant assault force. Though attacked by Banshees and Phantoms, Thorne managed to hijack a Banshee and destroy a Phantom, giving Majestic time to exfiltrate.[10]

When Thorne went missing the rest of Majestic set out to find him. They eventually found Thorne in the nick of time, with DeMarco shooting Gek 'Lhar ('Mdama's second-in-command) right before the Elite could kill their comrade.[11] Several skirmishes later, Captain Lasky contacted Majestic via hologram and asked them to rescue Dr. Catherine Halsey from Jul 'Mdama. When they arrived at Halsey's location Grant, Hoya, and Madsen took position above the entrance and waited for Thorne to signal to attack. When he did Grant yelled to the Elites to distract them; Majestic quickly opened fire on several Elites. Grant and the rest of Majestic showed up to help Thorne just as Promethean Knights teleported into the area and engaged them. 'Mdama managed to escape with Halsey just as Thorne and Palmer closed in on him.[12]

Sometime later Commander Palmer and Majestic were ordered to deactivate one of the two translocation artifacts binding Infinity to Requiem; Crimson was tasked with deactivating the other.[13] Majestic faced significant Covenant resistance in deactivating their device. While making their way to the artifact Grant tossed a grenade that killed at least one Elite. Majestic succeeded in deactivating the artifact shortly after Crimson. While evacuating Grant co-piloted the Pelican with Commander Palmer, pointing out Crimson's Pelican that was just ahead of them. They arrived aboard Infinity at the same time as Crimson, allowing Infinity to narrowly escape.[14] 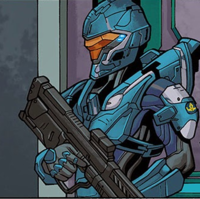 Grant stands guard while Madsen secures entrance into the station.

On March 11, six days after DeMarco's death, Majestic, sans Thorne, and Roland were in the middle of a poker game night. Thorne walked in to discover that the rest of the team had made wagers on DeMarco's keepsake, the looted energy sword recovered from Gek 'Lhar during the Requiem Campaign. Days ago, Grant had won DeMarco's sword in a card game against Spartan Jones of Fireteam Bailey, only to suddenly lose it to Hoya. Thorne expressed that the weapon was a tribute to DeMarco for having saved his life, and requested to join in and take a shot at playing for it. Hoya yielded to his request when the rest of team agreed they all deserved an equal chance. After being rebuked for almost sitting down in DeMarco's seat, Thorne pulled up a chair and joined the others around the table. When Roland began to start a new game of Hold 'em poker, Thorne stopped him and replaced the virtual holotank cards with his own inherited deck of physical playing cards. As Hoya dealt the deck and revealed the community cards, Roland suddenly alerted the team to an emergency distress call. Before the Spartans left their interrupted game, Thorne unveiled his winning hand, a quad of kings, and claimed the sword of his fallen friend.

The distress call, it turned out, originated in the Artesia-702 system and was coming from the damaged freighter Pilgrims' Pride. Majestic was permitted to return to being at ease, since it was judged to be of no immediate danger. However, upon arriving at the freighter's location, a trap was sprung inside Infinity's sub-vessel deployment bay. Fireteam Majestic was dispatched along with Fireteams Colossus and Fenrir to repel the attack by preventing the freighter from self-destructing inside Infinity. As team Majestic advanced to the freighter's core, they encountered and quickly disabled multiple automated defense turrets. As the enemy went into retreat, the freighter was tugged out back into space, where Grant ejected its core before it exploded. The Spartans survived the detonation and requested pickup.[15]

Following the attack, Infinity learned the freighter's assault crafts seemingly belonged to the long-lost UNSC Spirit of Fire and tracked their origin to Oth Lodon, a gas giant located deep in Jiralhanae space. With the Spirit's possible location found, Fleet Admiral Hood authorized a search and rescue mission. Equipped with OF92 Booster Frames, Commander Palmer and Fireteam Majestic scouted the planet's system and came across not the Spirit of Fire but a Covenant station controlled by New Colonial Alliance insurgents.[16] The station fired upon Infinity with its glassing cannon, disabling the UNSC flagship. Palmer immediately ordered Majestic to take control of the station. After evading oncoming missiles on their Booster Frames, the Spartans quickly boarded the station and secured the bridge, ordering everyone to freeze. The Spartans apprehended Captain Daniel Clayton, a UNSC defector and the mastermind behind the attack on Ealen IV. They then turned their attention to his associate Vata 'Gajat, who was preparing to assault the crippled Infinity. With the station's cannon back online, they fired on 'Gajat's flagship, destroying it and saving Infinity.[17] 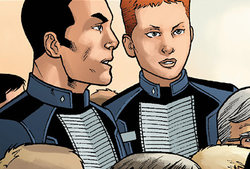 Thorne and Grant in New Phoenix.

By March 22, Fireteam Majestic was stationed aboard the orbital defense platform Oaxaca Station while Infinity underwent repairs. Grant was unable to sleep well as the station did not feel home like Infinity. She woke up Thorne, who was having nightmares about the attack on New Phoenix eight months ago, and the two discussed attending the reopening of New Phoenix. Thorne was at first reluctant to return to the city. However, Grant insisted that he visit his home and offered to accompany him as "backup", seeing as they had nothing to do for the next three weeks. Two days later, they attended New Phoenix's Rebirth ceremony presided by UEG President Ruth Charet. Thorne then took Grant to his family's home and showed her around.

While exploring the house, Thorne discovered a violin belonging to his grandmother. He concluded that his grandmother had been practicing it when the attack occurred. Distraught, Thorne decided he wanted to leave but Grant told him the story of how she was on her home planet when it fell. Grant told Thorne that he should be happy to still have a home to return to and that his dreams were trying to tell him to relieve all the pain he had inside. Grant then left Thorne as he decided to honor his family by playing his grandmother's violin. Three weeks later, they returned to Infinity and departed from Earth. Grant was able to sleep well again and Thorne was no longer having nightmares, thanks to Grant's support.[4]

On May 9, 2558, Naiya Ray and Thorne were assigned, separately from the rest of Majestic, on a secret mission to capture a Sangheili in possession of a mysterious bioweapon on Ven III. After communications with both Spartans were lost,[18] Fireteam Majestic was deployed to rescue them from the Kig-Yar pirates based on Ven III, with Palmer assuming command of the team in the absence of Thorne. Upon arriving at the pirates' base, Majestic and Palmer took out several Kig-Yar pirates. After receiving notification of Thorne's location by Ray, Palmer was going to redirect Majestic to Ray to help her retrieve the bioweapon but Ray shut off her locater to force them to rescue Thorne instead. Majestic eventually found Thorne and returned him to the Infinity.[19]

Grant is tasked with protecting Glassman.

After Infinity was trapped near the uncharted world of Aktis IV on July 19, 2558, Grant was deployed to the planet's surface alongside the rest of Majestic, with Palmer once again assuming tactical command of the team. On a forested island the Spartans discovered and secured a Forerunner structure after defeating a group of Covenant forces, and Dr. Glassman was brought in to investigate. Shortly afterward, Jul 'Mdama's Covenant launched a surprise assault against the Spartans and they became trapped in the structure. However, Glassman was able to activate the facility's teleportation grid. Grant was tasked by Palmer with taking a Spartan splinter team and Glassman through a portal to the other side of the island while Palmer, Thorne and Ray translocated to another location. Upon exiting the portal Grant's team were almost killed by friendly fire from Mantises that Infinity had deployed against the Covenant forces.[20] The battle eventually concluded with Jul 'Mdama attaining both halves of the Janus Key and leaving the system while the Spartans returned to Infinity.[21]

Grant's most distinguished talents are considered to be her sharp insight and clear decision-making, as well as her ability to remain calm and focused on the task at hand regardless of the situation. She is also noted for her combat abilities and athletic skill, which contributed to her role as a tester for the GEN2 MJOLNIR.[1]

Grant is voiced by Elle Newlands.