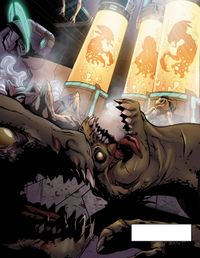 Kig-Yar killed by a bioweapon.

A bioweapon, or biological agent, is a weaponized pathogen intended to cause disease in lifeforms. Biological weapons can be used in warfare or in terrorist acts to decimate large populations without having to engage in direct combat or destroy infrastructures. The United Nations Space Command general emergency code Hydra signifies imminent threat from biological weapons of mass destruction.[1] The Office of Naval Intelligence had a bioweapons team.[2]

After establishing a research facility on Trevelyan in March 2553, the Office of Naval Intelligence's bioweapons team began to experiment on genetically modifying the proteins and saccharides in the colo and the Sangheili grain known as irukan, with the goal of creating a bioweapon to be unleashed against the Sangheili as a backup plan in the event ONI's strategy to destabilize them failed.[3]

In 2556, Sangheili terrorists created a weapon often referred to as a bioweapon, created out of a new element mined from a surviving fragment of Installation 04. Using the bioweapon, they launched an attack on the Outer Colony of Sedra, infecting or killing many of the planet's human inhabitants. After the source of the bioweapon was traced, a joint ONI-Sedran Colonial Guard mission was launched to destroy the deposits and prevent the bioweapon from ever being used again. Though most of the team was killed, Colonel Randall Aiken of the Sedran Colonial Guard succeeded in destroying the deposits with a HAVOK tactical nuclear weapon while Commander Jameson Locke and Private Talitha Macer escaped in a Bactrian-class freighter.[4] It was later noted, however, that the weapon was distinctly not biological in nature.[5]

In 2557, ONI personnel aboard the research and development station Argent Moon created and experimented with an unsanctioned biological weapon known as asteroidea merozoite. An accident caused a particularly aggressive form of the compound to vaporize and disperse within the station, killing all personnel aboard, and forcing its AI Rooker to quarantine the ship and set it on a course away from populated systems.[6] In reality, the bioweapon experiments had been part of Intrepid Eye's plan to prepare humanity for the Mantle of Responsibility.[7]

After the Human-Covenant War, a group of Kig-Yar occupied a Covenant research laboratory on the planet Ven III. They were killed by a biological agent in early May 2558. A lone Sangheili survived and fled the laboratory carrying the bioweapon in a containment cylinder. The UNSC was alerted and tasked the UNSC Infinity with investigating the Covenant bioweapon.[8]