"Let's show the UNSC just how mighty their flagship is not."
— Captain Daniel Clayton, before ordering to attack the UNSC Infinity.

The Ambush at Oth Lodon was an engagement fought between the UNSC and the New Colonial Alliance near the gas giant Oth Lodon in March 2558.[1]

During the Battle for Arcadia in February 9, 2531, the UNSC Spirit of Fire arrived at the planet Arcadia, where it assisted in the evacuation of civilians, and the eradication of the Covenant from the planet's surface.[2] When Professor Ellen Anders was captured by the Arbiter Ripa 'Moramee, the Spirit of Fire quickly gave chase, following the Arbiter's flagship to an unknown planet.[3] Before leaving the system, the Spirit of Fire dropped a log buoy and Terrence Hood, Captain of the UNSC Roman Blue was assigned to recover it. However, as the colony was already deemed lost by UNSC command, Roman Blue was also ordered to withhold from engaging the enemy in combat. However, Hood, enraged by the massive losses the Covenant had already inflicted on humanity, ordered his crew to attack the Sinaris-pattern heavy destroyer Radiant Perception. Overwhelmed, Hood was forced to retreat. Consequently, the Spirit of Fire's log buoy was not recovered and Hood would view himself as responsible for the Spirit of Fire's disappearance.[1]

Out of guilt, Hood provided financial support for both James Cutter's legitimate family (his apparent widow Mary and their daughter) and his secret one, supporting Daniel Clayton's mother for years.[1]

In 2558 Clayton had come to serve under Rear Admiral Horatio Temkin, the UNSC's ambassador to Sanghelios. Clayton eventually learned that Lord Hood had been acting as a benefactor throughout his entire career in an attempt to make up for the loss of Cutter and Spirit of Fire. Feeling he had never accomplished anything for himself, Clayton joined Admiral Mattius Drake's New Colonial Alliance and sought vengeance on Lord Hood.[1]

Having learned of Lord Hood's diplomatic mission to Ealen IV, Captain Clayton leaked intel about the peace talks and employed the help of a Sangheili mercenary, Vata 'Gajat. On March 5, they led an attack on the peace conference.[4] The tide of the battle changed when the delegation reestablished communications with their orbiting fleets and escaped from the planet. Not wanting to risk being identified, Clayton and 'Gajat retreated before the UNSC Infinity and their allied Sangheili and Jiralhanae ships could engage them.[5]

After their failed assault on Ealen IV, 'Gajat and Captain Clayton lured Admiral Hood and the UNSC Infinity into a trap. They launched a freighter, the Pilgrims' Pride which sent out a distress signal that was later picked up by UNSC Infinity. When Infinity arrived in the Artesia-702 system, it found the damaged freighter leaking atomic matter with faint life signs aboard and tugged the ship into one of its deployment bays. An ambush was sprung within the bay when the freighter set itself to self-destruct and multiple UNSC aircraft exited its cargo bay. The attack was repelled by Fireteams Majestic, Colossus, and Fenrir.

After the battle, Infinity crew discovered, after running an I.D. check on the Vultures and Sparrowhawks used on the ambush, that the assault crafts used were from the Spirit of Fire.[6] 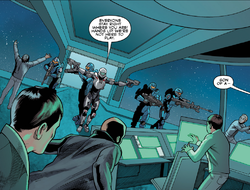 Roland discovered the Pilgrims' Pride was supposedly built five years ago, despite its assault craft being from the Spirit of Fire, which has been missing for 30 years. Sarah Palmer suggested the craft were smuggled off beforehand, but Roland disagreed as the craft were in too good of condition. Moving on, he revealed the ship's logs were wiped and then filled with false data. Despite that, he was able to retrieve the real data, coordinates from where it originated: Oth Lodon, a gas giant located deep in Jiralhanae space.

With the Spirit's possible location found, Palmer expressed that the ship might not even be there and that it might be a trap. Lord Hood authorized Palmer to conduct a search-and-rescue mission without being detected. Equipped with OF92 Booster Frames, Palmer and Fireteam Majestic scouted Oth Lodon's system. Exploring an asteroid field, the Spartans came across not the Spirit of Fire but instead an Ceudar-pattern heavy corvette docked at a Covenant station. Palmer restored communications to inform Infinity about the discovery.

Soon after, Infinity jumps in system right in front of the space station. Expecting this, Clayton opened a channel to Infinity. Talking to Hood, he identified him as being the one who sent his mother and him money because he was the one responsible for the Spirit's disappearance. Upset at feeling like he never accomplished anything, he turned to Admiral Mattius Drake when he offered him an opportunity. Revealing that he had intended for Spartan Vladimir Scruggs to kill Hood on Ealen IV, he announced that he lured Infinity to the station to kill Hood. He ordered the station's glassing cannon to fire on Infinity, piercing all the way through the side of the ship.[1]

The station rapidly fired two more shots through Infinity, crippling the ship and incapacitating its bridge crew; Commander Bradley was killed while Admiral Hood was paralyzed. The attacks quickly overheated the cannon, requiring some time to recharge. In the meantime, Palmer and Fireteam Majestic were deployed to board the station and stop Clayton using Booster Frames. The insurgents detected the Spartans and opened fire with the station's missile batteries on Clayton's orders. However, the Spartans successfully evaded the missiles.[7]

Clayton ordered Shipmaster 'Gajat to stop the Spartans, but 'Gajat, in a burst of ambition, saw Infinity as the more valuable target and decided to destroy it instead. While Spartan Hoya noticed 'Gajat's flagship undocking from the station, the Spartans decided to board the station anyway. 'Gajat received a distress signal from Clayton, but ignored it, instead proceeding with his plan to destroy Infinity. Palmer and Majestic entered the station's command center and forced the crew to cease their operations, ignoring Clayton's orders to the contrary. Spartan Madsen knocked Clayton out as revenge for DeMarco's death on Ealen IV. 'Gajat contacted the station to tell Clayton he was about to destroy the Infinity, but was answered by Palmer instead. Palmer ordered Spartan Thorne to fire the cannon, destroying 'Gajat's ship.[7]

Three days later, the UNSC dispatched a task force comprising at least one unidentified warship, Charon-class light frigate and Paris-class heavy frigate to repair Infinity and monitor the station. Lasky and Ray also returned to Infinity after their intelligence-gathering mission with Petra Janecek on Karava.[7]

A now wheelchair-bound Hood visited Clayton in his cell, asking why Admiral Drake wanted to destroy the Infinity despite intending to capture it five years before. Clayton only told Hood the NCA was stronger than before and had agents on every colony, even Earth. Hood then ordered his men to take Clayton to Midnight Facility; while being taken away, Clayton told the admiral they would meet again.[7]