The Mission to Installation 03[2] was an engagement on the surface of Forerunner Halo Installation 03 in the Khaphrae system and at the Composer's Forge on July 25, 2557, between the United Nations Space Command and the Didact's Prometheans.[1]

Upon discovering Installation 03 following the Battle of Tribute, the Office of Naval Intelligence conducted numerous searches on the Halo.[3] One of the objects they discovered on the installation was the Composer, a Forerunner machine that could transform an organic being's mind into software format while destroying the body. The Composer was brought to Ivanoff Station, a research facility located on one of the asteroids orbiting Installation 03, for further study. On July 24, 2557, the Didact arrived at Ivanoff Station to recover the Composer after his awakening on Requiem.[4]

The Didact used the device to compose the citizens of New Phoenix on Earth, but was ultimately stopped by John-117. During the battle, John-117 caused the Didact to fall into a slipspace rupture generated underneath the Composer.[5] However, the Didact survived and crash-landed on Installation 03. During this time, a UNSC science team, along with Spartan Team Black, were still on Installation 03's surface, unaware of what had happened at Ivanoff.[1][6]

On Gamma Halo, the science team and Team Black were based in a camp on one of the ring's deserts, nearby the Composer's original location on the installation. However, the Didact, along with several Promethean Knights and Crawlers, arrived via a slipspace portal and crash-landed near Black's location. When Black went to investigate, the Didact awoke and swiftly killed all four Spartans with brutal efficiency. At the same time, the science team was attacked and killed by Knights and Crawlers. Shortly afterwards, the Didact encountered 859 Static Carillon, monitor of the Composer's Forge, who had come to investigate the opening of a service portal to the ring, as well as the apparent disappearance of the Halo's monitor. The Didact demanded that Static take him to the Composer's Forge; Static agreed, on the condition that the Didact would not use the Forge to produce more Promethean Knights, which it deemed "abominations".[7]

Due to the loss of contact with the team, Fleet Admiral Terrence Hood sent Blue Team, consisting of Frederic-104, John-117, Kelly-087, and Linda-058, to investigate Team Black's disappearance. Blue Team took a GA-TL1 Longsword to Installation 03 and landed near the research camp.[1]

Meanwhile, Static Carillon informed the Didact of Blue Team's actions. However, the Didact did not consider the Spartans a very serious threat and told the monitor that he looked forward to welcoming them to "his world".[1]

The battle at the Composer's Forge.

After they entered the portal, Blue Team arrived in a seemingly empty Forerunner city. They moved further into the city and soon discovered six Composers, just before the Didact appeared behind the Spartans. Holding Installation 03's activation index, the Promethean leader told Blue Team that they have arrived at the Composer's Forge. Blue Team opened fired, to no avail; the Didact stomped the ground, generating a shockwave that caused the Spartans to stumble and fall to the ground. The Didact then summoned an army of newly-created Promethean constructs and a frantic firefight broke out.[7]

As the outnumbered Spartans fought for their lives, 859 Static Carillon arrived on the scene, furious that the Didact violated their agreement in having created more Promethean Knights. In retort, the Didact physically and aggressively ordered the monitor to fulfill its part of their bargain. The monitor obliged, and transported Gamma Halo over the Forge via slipspace. Satisfied, the Didact took one of the Composers from the Forge and departed for the ring, intending to repair the installation and use it against humanity and Earth. However, while the monitor was indifferent to mankind's fate, it took issue at the Didact's creation of new Knights from the humans of New Phoenix due to its abhorrence of the machines and deemed their presence on its installation unacceptable. Static Carillon helped the Spartans retreat back to the Gamma Halo portal in pursuit of the Didact, holding off the hordes of Promethean machines. As the Spartans entered the portal, Static Carillon told John that he would attempt to close the portal behind the Spartans.[7] 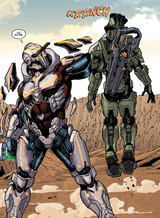 Blue Team returned to the surface of Installation 03 from the Composer's Abyss and made it just in time to witness the Didact's new Composer rising from the Abyss. John fell behind the rest of Blue Team—due to his conversation with Static Carillon—while the Didact confronted Fred, Kelly, and Linda. The Didact attacked the Spartans and prepared to kill them, unaware of John's location. As the Didact was about to execute Kelly, John snuck up behind the Forerunner and stabbed him in the eye with a combat knife. Intending to correct his mistake of not having killed the Spartan when he had the chance, the Didact grabbed John, lifted him up in the air, and crushed his helmet.[7] However, the rest of Blue Team intervened, forcing the Didact to throw John aside. The Forerunner quickly subdued all four Spartans, but Static Carillon attacked the Didact from behind and teleported him away before he could finish them off.[8]

The monitor revealed that he had teleported the Warrior-Servant into the Halo's control room, as it is the most secure location on the installation. Although Static Carillon admitted that teleporting the Didact to the control room was a "severe tactical error", it reasoned that the Didact would have killed the Spartans otherwise and reached the control room anyway. After the monitor told the Spartans that the Didact's armor had the ability to attune itself to enemy weaponry, John grabbed the installation's activation index (which the Didact dropped when Static Carillon attacked him) and formulated a new plan to defeat the Didact.

As John made his way to the control room, the rest of Blue Team returned to their Longsword. Meanwhile, in the control room, the Didact was confused that the monitor would be willing to aid the humans yet further his own plans. John entered the control room behind the Didact and wished to talk with the Didact rather than fight at the moment, much to the confusion of the Forerunner. John explained to him that while his many attempts to kill the Didact conventionally had failed he must now take a different approach. The Spartan inserted the index into the Core of the installation, puzzling the Didact even more. John disabled Gamma Halo's safety protocols and Static Carillon ejected the structural plate housing the control room and sent it towards the planet. As the fragment impacted the Forge, presumably destroying the five Composers housed there, John was teleported to safety while the Didact was disintegrated by the overlapping pulses released by the Composers upon their destruction. Static Carillon teleported John and itself to Blue Team's Longsword shortly after.[8]

With the Didact defeated, Static Carillon stabilized the ring to prevent the loss of the entire installation. The monitor thanked the Spartans for giving it a new purpose in life and stated that it would take the Halo to safety and repair it; no response was given when Fred asked where. After, Blue Team returned to Earth. John had his armor fully repaired and was debriefed by Fleet Admiral Hood. Hood congratulated John on killing the Didact, but John stated that he believed the Didact was only "contained". In reality, however, the Didact had actually been composed.[9] Hood then ordered John and the rest of Blue Team to have some rest after years of combat. However, John returned to his Spartan comrades and told them that Hood gave them the all-clear for their next mission. Kelly asked where they will head next; John replied "anywhere we're needed". Blue Team then left to take on a new mission unknown to Lord Hood. After their departure, John's behavior was discussed by two high-level individuals within the Office of Naval Intelligence, who deemed his self-reassignment a predictable consequence of his nature and unwavering dedication to his career.[8]