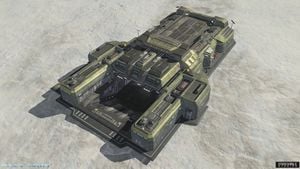 Render of a Firebase.

The UNSC Firebase[1] is a prefabricated base of operations used by the UNSC Marine Corps in combat zones or locations that are otherwise hostile.

The UNSC developed modular firebases due to lessons learned in the early days of the Human-Covenant War, in which large UNSC military installations proved vulnerable to orbital bombardment.[2] The Firebase combines the needs of a tactical communications, a command center and expansion into both a barracks and a production facility capable of assembling combat vehicles. The Firebase unit itself is a variant of the old colony starter units constructed out of polycrete and powered by a small hydrogen reactor. Because gaining a foothold quickly was key to fighting insurrections throughout the colonies, ships can directly deploy the entire assembly unit of a Firebase via large dropships such as the D20 Heron or D81-LRT Condor, making it immediately useful. This ability proved invaluable in the ongoing war with the Covenant and was often considered a key advantage of the UNSC on the ground.[1]

The UNSC have fielded several variants of Firebase.

"Pod"[3][Note 1] firebases are deployed from orbit via the use of D20 Heron transport craft. These firebase variants are themselves variants of old colony starter units constructed out of polycrete, and can form vast labyrinthine underground complexes. "Pod" firebases are capable of producing unarmed Warthogs, along with the special unit for the selected leader.[1] Firebases were used to great effect in the Human-Covenant War, including the Harvest campaign - in which one served as the core of Alpha Base - the Battle for Arcadia and the Battle of Trove. Although starting out frail, the structural strength of the command center is increased with the addition of each new Firebase addition, making it a good idea to erect multiple Firebase additions as soon as possible.[1]

Beneath the Firebase there is a large underground garage in which resources and vehicle parts dropped down from orbiting warships may be stored. Also, all Firebase additions such as Reactors or Supply Pads emerge up from this subterranean area, pre-built and fully constructed. Firebases also have self-destruct sequences and Lockdown Protocols, the latter of which can be used to deliberately trap one's own newly-trained forces inside the compound.[1]

Expeditionary firebases[3][Note 1] are another type of lightweight firebase module that can be delivered directly to the battlefield by D81-LRT Condor dropships, and were used notably in the Second Ark Conflict. The modules then unpack and can assemble basic structures and UNSC weapons systems, protected by up to four turret emplacements. Upgrading the firebase to a combat station allows basic infantry to be deployed while the command center and headquarters expansions make additional units available. Each upgrade also opens additional build locations for support structures.[3]

The Spirit of Fire's expeditionary firebases trade a portion of the original Heron-transported "pod" system's operational flexibility for substantial mass and resource savings. Unlike the older pod firebases, additional pre-manufactured base structures must be transported to the firebase rather than assembled on-site, but this method saves irreplaceable strategic resources aboard the Spirit of Fire. The older pod bases remain in reserve, with the Heron dropships used exclusively for mass deployment of cargo and troops in secured rear areas.[3] 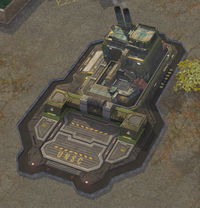 A minibase sporting a Vehicle Depot on Arcadia in 2531.

Like firebases, there are two known variants of UNSC minibase employed - one resembling the "pod" firebase design, the other resembling the 2559-era firebase. The latter minibases are deployed from Condors to opportunistic locations in the operations zone. Each minibase is built using stripped-down modules assembled and packed aboard the Spirit of Fire before being loaded on the dropship for deployment. Minibases that survive a battle become unmanned sensor and communication relays in the ever-growing system of control nodes being extended across the Ark by Isabel and Captain Cutter.[4] Minibases also serve as the core basis for UNSC Strongholds.

Based on rapid-deploy fortifications in the War Games training simulations set up by Isabel, these bases are vitally important objectives that define the win conditions of the Strongholds training mode. Each Stronghold has infantry, air, and vehicle support structures already attached. Each captured Stronghold increased population capacity. The concept of Strongholds began in War Games, but Isabel continues to run optimization routines on the design templates she uploaded to the Spirit of Fire's databanks. Isabel has gleaned many novel upgrades from the logs kept by the ship's previous AI, Serina, of the many prior engagements of the Spirit of Fire.[5]

In Halo Wars, a default Firebase costs 500 resources to drop in from orbit, and only provides three construction slots and no turret foundations. It has two upgrades, Station and Fortress.

The Station is an upgraded version of the Firebase, retaining the command center, but adding two more building sites (for a total of five) and four turret foundations.

The Fortress upgrade allows two other building sites, totaling to seven building sites and the same four turret sites from the station. It also features a self-destruct sequence allowing it to destroy itself for other allies to make a base in its spot and damage any enemy units nearby. The Fortress also allows for a lock sequence that will not allow any newly trained units to leave the base when done training/being produced.

Among other things, the Firebase themselves can produce units and corresponding improvements for them.

Many players use firebases when laying siege to enemy bases, by constructing Barracks, Vehicle Depots and Air Pads, and other similar structures, allowing for the rapid deployment of forces to the front lines. Firebases' self-destruct sequences are commonly used by players to prevent enemies from earning points for the base's destruction, and to allow other allies to replace the base and damage any nearby enemy units. It cost 500 resources and only Forge and Anders can build these. Make sure the area is clear because it can be shot down as it is dropped from orbit.

Firebases now cost 500 Supplies and 200 energy, while the cost of Supplies can be reduced as long as Fortify Base was researched up to level 3, with each level gain a discount of 50 Supplies, up to 150 Supplies upon Researching Level 3 Fortify Base. The main structure is delivered to the battlefield via D81-LRT Condors as opposed to D20 Herons seen in Halo Wars. The smaller buildings are deployed via Pelican as opposed to being built automatically underneath sockets surrounding the base. The size of the firebase itself is reduced considerably due to the initial firebase being delivered by a single Condor while the base structures surrounding it, include minibases, are mainly delivered by Pelicans.

The Command Center upgrade will add another 2 building slots and unlocks HQ Tech 2 for more infantry and vehicular units. It costs 1,000 energy and 50 Seconds.

The Headquarters upgrade will only unlock HQ Tech 3 for the remainder of the infantry and vehicular units, also enable to research level 3 upgrades. It costs 1,500 energy and 50 Seconds.

Minibases are scattered around the map and cost less than standard firebases. 1-slot minibases cost 200 resources while the 2-slot minibase costs around 300 resources. The 3-slot minibase is available in certain campaign level such as "Under the Dark", where Alice-130 is put in command of the base in order to use Kodiaks to besiege a gravity lift, and "Fighting Retreat", when Pavium falls back to the second defensive line to hold out against the Flood attack.

Unique units are mainly trained from the Firebase as they can only be unlocked via Leader Power Upgrades.

Firebase also can be locked down to hold the units inside the structure and assemble them when player decide to lift the lockdown.

Like its counterpart from Halo Wars, in addition to Marines and Jackrabbits, the bases themselves can produce unique units along with their corresponding improvements, exclusive to some UNSC commanders.