This article is about the Covenant building. For the map in Halo 5: Guardians, see Summit. 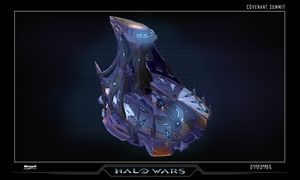 The summit is a kind of deployable structure used by the Covenant and its remnants. They serve as an extension option on the Covenant's citadel firebases,[1] and are designed for the mass manufacture and maintenance of aerial vehicles.[2][3] It serves as a counterpart to the air pad and apex structures employed by the United Nations Space Command and Banished, respectively - with the latter bearing a considerable visual similarity to the summit itself.

Summits are capable of mass-manufacturing, maintaining and upgrading a large variety of Covenant vehicles.[2][3] These include the Bkowe'nei-pattern Vampire and the various design patterns of Banshee[1][4] and Phantom.[2][3] Huragok may also be serviced at a summit, when not housed in their own dedicated Huragok recharge stations.[1][4]

Summits were used by the imperial Covenant during their planetary warfare campaigns during the Human-Covenant War. These included deployments on Arcadia[5] and Trove.[6]

In the post-war era, summits continued to see use in the Covenant remnant led by Jul 'Mdama. In February 2558, one such installation was deployed by 'Mdama's forces on Requiem and was the site of an attack by Fireteam Shadow during the Requiem Campaign. During the installation, the Spartan-IVs used TQ-8 seeker drones to help their attack on the base, though the mission was interruped with Shadow's recall for a more urgent mission to board and destroy a Zanar-pattern light cruiser, Panom's Canticle. To speed up their evacuation from the site, Shadow stole a Phantom dropship docked at the summit site to use for transportation.[2][3]

The summit is a Covenant building featured in Halo Wars. It costs

150 and requires a tech level of

The summit serves as the Covenant counterpart to the UNSC Airpad and constructs units such as Banshees, Vampires and Engineers. All the air-based unit upgrades are researched at the Summit. Unlike the UNSC Airpad which requires a tech level

2, the summit can be built at a tech level of

0, making an early 'Banshee rush' fairly easy. Like all buildings in Halo Wars, it takes the color of the player's team.