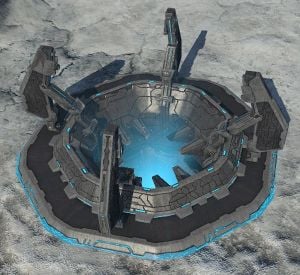 A Sentinel factory on Harvest.

The Sentinel factory, is an underground variant of the Forerunner Sentinel manufacturing facility, capable of constructing Aggressor Sentinels and Super Sentinels. The Sentinels exit the facility via a tunnel connecting the facility to its exterior. Like the Protector plant, the square-shaped exit is characterised by four pillars at each of its corners, but the Sentinel factory possess two additional protrusions on the exit's inner walls. Two such facilities were on Harvest, and another was within the shield world Trove.[1]

The Sentinel factory appears exclusively in the Halo Wars Skirmish levels Repository and Glacial Ravine. Unlike other bonus buildings, the building cannot be garrisoned. Any player with a unit nearby may access its menu and purchase Sentinel units, which can then be added to their forces. The Sentinels are produced instantly and must go through a cooldown timer before being able to produce a new unit, much like the UNSC leaders' Support Abilities.