Strato-Sentinel is the name applied to a type of Forerunner Sentinel.

The Retriever Sentinel are considered to be one of the more powerful variants of the Sentinel, Retrievers are massive, ship-sized drones that were utilized to construct installations of the Halo Array from Installation 00, as well as to provide maintenance to the Ark itself.[1]

The Steward Sentinel is a variant used to accompany other Forerunner machines and assist them with their tasks.[2]

This unnamed variant is similar in design to the Steward, but is was used in the creation of the Portal at Voi.[3][4] 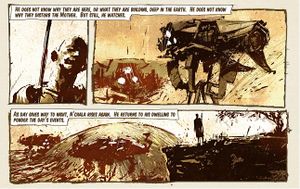 N'chala watches the construction of the portal.