A flotilla of Supernal Spiral-class keyships enacting the Conservation Measure, following the firing of the Halo Array.

"I've remotely destroyed our Keyships. A security measure. Without them I cannot reach the Ark. But neither then can the thing."
— The Librarian to the Didact.[1]

Keyship is a classification of superluminal Forerunner vessel in use both during and after the Forerunner-Flood war. Keyships are capable of activating strategically-placed slipspace portals hidden across the Milky Way, including those leading to and from Installation 00.[2][3] Though many keyships once existed, the majority of the vessels were destroyed by the Librarian to prevent the Flood from reaching the Ark.[1] The most notable of the surviving vessels is Supernal Spiral-class keyship known as Anodyne Spirit. Once the centerpiece of the Covenant's holy city of High Charity, Anodyne Spirit now rests on Installation 00 in the midst of a new conflict.[3]

Despite multiple classes of keyship existing, their sole mission of preservation resulted in little change between them. Keyships have a fixed tetrahedral shape consisting of three relatively narrow struts extending from its massive, elongated prow. While each keyship incorporates a full suite of defensive countermeasures and powerful shielding, their primary defense lies in its combination of speed and agility.[3]

Utilized by members of the Lifeworker rate, keyships were built exclusively to facilitate the Librarian's Conservation Measure and their crews were renowned for their devotion to the tenets of the Mantle of Responsibility. Their role in this endeavor cannot be overstated; keyships were used to transport specimens of sentient species from worlds across the Milky Way to Installation 00 where they would be safe from the effects of the Halo Array. Then, once the array was activated, the keyships would return to the same planets they had visited previously to reseed them with life.[3] 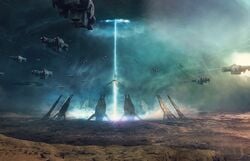 The keyship Anodyne Spirit is used to open a slipspace portal on Earth.

In order to facilitate the rapid movement of the specimens, each keyship contains permission codes and interlocks necessary to control portal complexes buried on strategic worlds across the galaxy, including those that connect to extragalactic locations such as Installation 00.[3]

Upon reaching a planet targeted for indexing, a keyship's Forerunner crew would initiate a detailed cataloguing and sampling process to identify exemplary specimens. Then, these specimens would be retrieved and placed in stasis within the keyship's cylix repositories. Once its tasks were complete, the keyship would return to Installation 00 and wait until the activation of the Halo Array. Following the immensely destructive pulse, the keyship would visit the very same worlds it did previously, generally without the presence of a Forerunner crew. Under the protection and supervision of a single high-order ancilla and hosts of sentinels, these worlds were reseeded with life. If needed, the keyship could also use onboard automated systems to clone and biofabricate healthy replacements to supplement its catalogued populations.[3]

During the Forerunner-Flood war, the Forerunners used its fleet of keyships to index countless species. A number of keyships were given to the Librarian, and combined with her ability to build slipspace portals to Installation 00, the Librarian was able to transport herself back to Installation 00 if the situation required. The Librarian, however, would ultimately destroy her personal keyships to prevent them from falling into the hands of the Flood. Near the end of the war, keyships were part of an unknown strategy to hold off the Flood for nearly 79 years, although this advantage would be foiled by the massive computing power of the Flood.[4]

As part of the Conservation Measure, Forerunner Lifeworkers gathered DNA and living specimens of the sentient species located throughout the galaxy, protecting them from the devastation of Halo by transporting them to Installation 00 within these keyships. After the ringworlds fired out their pulses, the keyships were sent to the planets from which the sentient species originated, releasing a population of the species on their planet of origin.[5] After reseeding the galaxy with life anew, the keyships returned to Installation 00.[3]

Anodyne Spirit at the center of High Charity.

Centuries after the keyship Anodyne Spirit returned to Installation 00, a fragment of the imprisoned Mendicant Bias managed to infiltrate the vessel and attempt to use it to return to Earth where it planned to atone for its sins by assisting humanity, the Reclaimers. However, the Contender-class ancilla failed in its task, ultimately crashing on the San'Shyuum homeworld of Janjur Qom.[3] In the following millennia, the San'Shyuum formed a religion around derelict vessel and other remnants of the Forerunners on their world. Eventually, a war was fought between two sects of the religion resulting in one of the sects boarding Anodyne Spirit and fleeing Janjur Qom.[6][3] After some time, the San'Shyuum encountered the Sangheili. Their differences in beliefs regarding the Forerunners led to another war that ended in a stalemate largely the result of the keyship's extreme power and resilience in battle compared to the Sangheili vessels.[6] Following this war, the Covenant was formed and Anodyne Spirit was decommissioned, becoming the centerpiece of High Charity, the fledgling empire's capital.[3] There, it would power the massive space station up until the Great Schism in November 2552 when the Prophet of Truth appropriated the keyship to activate the Portal on Earth and travel to Installation 00 to activate the Halo Array. Anodyne Spirit was left in a region of the installation known as Mahsko with a detachment of Covenant forces led by Prelate Dhas Bhasvod assigned to guard it.[7][8]

In July 2557, while on Triniel to get an upgrade seed for the Ace of Spades, the crew visited a Builder facility where Rion Forge was drawn to the design seed for a keyship in a seed-building lab. Rion, who had a deep appreciation for starships, found it extraordinary to witness the plans for a vessel from an ancient alien race. 343 Guilty Spark identified the design seed as belonging to a keyship for Rion before moving on to crafting the Ace of Spades upgrade seed using the lab's systems.[9]

After their arrival to Installation 00 on 2558, Colony, two Mgalekgolo bond brothers that serve in the Banished, began focusing much of their attention on the activities near the resting place of the keyships, without informing the other Banished leaders.[10]

In 2559, Anodyne Spirit found itself at the center of a conflict once again when a Banished raiding party infiltrated the keyship in search of a slipspace flake. While within the vessel, the Banished encountered Dhas Bhasvod's force and a bloody skirmish ensued.[7] Following this, the Covenant loyalists emerged from the keyship and began to battle those fighting for control of Installation 00.[8][3]