Are you looking for Halo: The Cole Protocol, the sixth Halo novel?

"It would take years to ram this down the throats of the politicians, but as far as my battle group was concerned, it was law."
— Admiral Cole on his first draft of the Cole Protocol.[1]

Emergency Priority Order 098831A-1, also called General Order 098831A-1 and known commonly as the Cole Protocol, was a United Nations Space Command directive enacted by Admiral Preston Cole to prevent the Covenant from discovering the human homeworld and colonial capital, Earth, or any other inner colony world. In practice, it was intended to prevent Covenant's retrieval of data that contained the location of Earth; it forbade retreating vessels from setting a direct slipspace course toward any human population center, as the Covenant were able to track slipspace travel vectors and calculate the evacuating ship's destination. The policy also stated that to prevent capture, any military or civilian vessel, in the event of an emergency evacuation, was to self-destruct, after wiping all data matrices, to prevent the advance of the Covenant.

All UNSC personnel were commanded to read the Cole Protocol each day "by the letter" under an emergency transmission issued by the Naval Command. The Cole Protocol ensured that in nearly twenty-seven years of interstellar warfare, the Covenant never discovered the human presence on Earth, and only found other population centers either by accident, by tracking devices left aboard ships,[2] or by the presence of Forerunner artifacts via Luminary.[3] Unfortunately, the Cole Protocol ceased to be effective when, on October 20, 2552, Covenant forces invaded Earth; however, the protocol presumably remained in effect for the other remaining Inner Colonies. 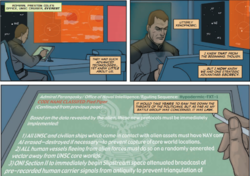 Hypodermic-FXT-J contained the basic instructions set in the final draft of the first articles of the Cole Protocol.[1] The report's contents are as follows:

Based on the data revealed by the alien, these new protocols must be immediately implemented:

The Cole Protocol
To safeguard and protect the Inner Colonies and Earth, all UNSC vessels or stations must not be captured with intact navigation databases that may lead Covenant forces to human civilian population centers.
If any Covenant forces are detected:
1. Activate selective purge of databases on all ship-based and planetary data networks.
2. Initiate triple-screen check to ensure all data has been erased and all backups neutralized.
3. Execute viral data scavengers (Download from UNSCTTP://EPWW:COLEPROTOCOL/Virtualscav/fbr.091)
4. If retreating from Covenant forces, all ships must enter Slipstream space with randomized vectors NOT directed toward Earth, the Inner Colonies, or any other human population center.[Note 1]
5. In case of imminent capture by Covenant forces and boarders, all UNSC ships MUST self-destruct.[Note 2]
Violation of this directive will be considered an act of TREASON and pursuant to UNSC Military law articles JAG 845-P and JAG 7556-L, such violations are punishable by life imprisonment or execution.

Destruction or capture of a shipboard AI is absolutely unacceptable.

Article 2 mandates the procedure for erasing a ship's data, primarily navigation data, as well as all backups, in case of potential compromise by the Covenant. In such situations, a ship-board artificial intelligence must be secured; if extraction is not possible, the AI must be purged. It is possible that Article 2 also governs protocol in terms of abandoning a vessel giving the terms that someone need to extract the AI out of the ship for safety if possible.[5][6]

No captured Covenant craft may be taken to human controlled space without an exhaustive search for tracking systems that could lead the Covenant to Human bases.

Subsection 7 dictates that captured Covenant matériel and ships may not be taken back to human-controlled space due to concerns that they might contain tracking devices; as such, it is likely part of Article 4. Bringing a Covenant weapon back to any UNSC installation or Inner Colony is considered an act of treason.[7] SPARTAN-III Emile-A239 possessed a large collection of contraband Covenant equipment which he acquired in the field. While possessing this matériel was a gross violation of Subsection 7, his superior, UNSC Army Colonel Urban Holland, refused to report the Spartan; Holland claimed that the Army does not need to follow Navy protocol. The SPARTAN-IIs had standing orders from the Office of Naval Intelligence to seize Covenant weapons and technology whenever possible.[8]

Few have even heard of Subsection 7; it was little more than a technicality before Ascendant Justice was captured by SPARTAN John-117 and his team soon after the Battle of Installation 04. This was due to the chances of capturing even a severely crippled Covenant ship being minuscule, as the ship's crew would usually activate their self-destruct function before the completion of such attempts. Because Ascendant Justice could not be thoroughly searched, John-117 and ONI Lieutenant Elias Haverson instead planned to take the ship to Reach, which had already been compromised by the Covenant, and then try to return with a better prepared team.[9]