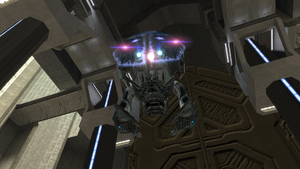 The underside of the Sentinel Enforcer, showcasing its powerful grapplers.

Grapplers are a kind of gravitic tool employed by the Forerunners and their machines. [1]

Grapplers use invisible tendrils of gravitic technology to push, pull and manipulate objects at a distance. Depending on their scale, they can have the strength and dexterity of a child or scale up to be used for pushing and pulling asteroids and spacecraft. Grapplers can also be used to "lock" objects together and hold them in specific arrangements, depending on specific aesthetic tastes.[1] Forerunner vehicles and even spacecraft may make use of grapplers in this manner alongside applications of hard light technology, creating vehicles that can be dynamically rearranged by the controlling ancilla to increase efficiency in the moment or compensate for damage. These systems were gradually abandoned as the Forerunner-Flood war took its toll, with newer ships utilising more locked-in shapes over dynamicism to due to resource constraints and the threat of the logic plague on artificial minds.[2] During the conflict, starships often resorted to using Modular Dispersal Technology to detach parts of their spaceframes which had become subject to Flood infestation.[3]

In warfare, grapplers are of limited use, though in extreme situations they can be used in combat in a manner similar to their much larger torsion driver cousins - in this manner they can be used to rip apart enemy craft and expose their insides to pinpoint weapons fire, though this usage is limited due to the grappler's limited strength and range.[4] Sentinel Enforcers may use their grapplers to pick up larger enemy combatants such as vehicles, before proceeding to crush them in their claws.[5]

Grapplers are fairly ubiquitous among the Forerunners' creations. Many classes of Sentinel use them including the Enforcer, and various Strato-Sentinels such as the Assembler, Extractor and Steward. Such uses are typically industrial in nature, though they can be used in combat roles should their defensive protocols be triggered.[6]

On a larger scale, grapplers can be used in the hulls of vehicles and spacecraft, or other forms of architecture, to form dynamically-rearranging geometries to suit functional and aesthetic preferences as needed.[2][1] The rate of Miners made use of complex arrangements of grapplers aboard their mining ships.[7]