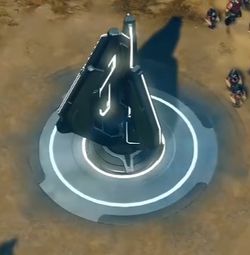 An inactive Control Tower on Installation 00

"The Cartographer's defenses make it almost impenetrable; the only way up to it is by a Forerunner elevator. If you can get access to the local Forerunner Control Towers, I can take control of the elevator and take us up. It's our only chance of getting inside."
— Ellen Anders to James Cutter[1]

Control Towers are large Forerunner devices installed across the surface of Installation 00 designed to terraform large areas of the Ark's habitable surface.[2]

A Control Tower is a large vertical structure that consists of three triangular-shaped prongs made of a metallic material and featuring luminous highlights. The tower was suspended over a circular platform.[3]

In order for the installation to maintain the vast variety of life the Forerunners had collected from across the Milky Way for eventual reseeding, a flexible environmental system on the Ark was essential. Working similarly to the output nodes of mass-particle replicators or the archaic 3D printers of the 22nd century, the towers are capable of generating kilometers-deep environments around them through manipulation of raw materials stored deep within the superstructure of the Ark, meaning all habitable surface area could be covered in an environment to match any life-sustaining planet in the galaxy. Atmospheres, soil and vegetation makeups, bodies of water or other liquids, and even gravitational conditions generated from the base of each tower could be custom-set in areas as large or as small as needed to sustain collected specimens from a particular planet.[2]

When an environment was complete, only a small percentage of each Control Tower remained visible above ground in order to minimize interference with the new local wildlife while still allowing for data gathering on the surrounding area.[2]

Control Towers can provides energy shields to the rear of Controller Sentinels via a tether link, rendering it impossible to damage them. The link can be disabled by capturing the Control Tower.

In March[4] and May of 2559,[5] several of these mostly dormant Control Towers were reactivated by the UNSC forces of the UNSC Spirit of Fire and a Covenant splinter group known as the Banished during their battle on the Ark. Professor Ellen Anders, with the help of Red Team and other UNSC forces, used three of these towers to seize control of an elevator leading up to one of the Ark's Cartographers.[3] Later, on Installation 09, Red Team seized control of three more of these towers, allowing Anders to take control of a Retriever Sentinel and blast through the Banished's shield around the Halo's Control Room.[6]

Control Towers were also used as part of a security measure for a Forerunner hangar, where a Despair-class fighter was stored. These also generated rear shields for Controller Sentinels. During Operation: SPEARBREAKER, Sunray 1-1 took control of five of these Control Towers to disable the cloaking shield over the hanger.[7]

In multiplayer, Control Towers serve as the objectives of the Domination game mode.