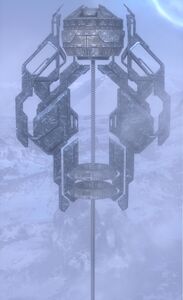 Skycrypts consist of a small, circular building located atop a long, thin pole or chain. Four fin-like structures slowly rotate around the pole directly beneath the main chamber. Given the central pole's apparent lack of structural support, the spires may employ anti-gravity technology to remain aloft.[2]

Skycrypts were generally suspended above ice worlds, and considered virtually inescapable to their detainees. However, they offer little defence against external threats.[1] At least fourteen of these structures were located on an unidentified, icy world - with at least one housing an unidentified occupant suffering a containment failure.[2][3][4]

The Halo: Combat Evolved Anniversary multiplayer map Solitary is located within one of these spires.