"We did not create so much without a means to catalog it all."
— The Librarian's imprint to Catherine Halsey[2]

The Janus Key is a Forerunner cartographical artifact[1] that provides real-time location of every piece of Forerunner technology in the galaxy when its halves are combined.[2]

Created in order to catalog the Forerunners' vast technological advancements, the key was designed in two pieces for security purposes. It was always protected by two Forerunner rates at all times, one with the Builders and one with the Warrior-Servants. This formal balance of power guarded the interests of both rates, requiring complete unity of purpose before the Key could be used. How the Librarian came to possess both pieces remains a mystery.[3] At some point, the key was placed within the Librarian's Rest inside the shield world Requiem; there, it would remain under the care of the Librarian's locally stored memory. The device was to be presented to the Ur-Didact after he returned from stasis so he could give it to humanity to spur their technological advancement. However, the Didact turned on humanity when he was awakened in July 2557, renewing his quasi-genocidal campaign which had been halted one hundred millennia prior.

The Librarian reveals the Janus Key to Halsey.

Six months after the Didact's attack on Earth was foiled, the Librarian's stored personality gave the key to Dr. Catherine Halsey, instructing her to take the key to the Absolute Record. After Halsey reawakened in the Covenant-controlled Copernicus Base, Jul 'Mdama took half of the artifact and escaped with the doctor. As she was being carried away, she threw the other half of the key to Spartan Gabriel Thorne.[2] Thorne eventually gave his half to Dr. Henry Glassman for further study.[4]

In July 2558, five months after the Requiem Campaign, Glassman continued his inspection of the incomplete Janus Key onboard the UNSC Infinity.

Sali 'Nyon obtains a half of the Janus Key.

At the same time, Dr. Halsey, who allied herself with Jul 'Mdama, plotted to acquire the UNSC's half of the Janus Key. She and 'Mdama constructed a decoy Forerunner artifact for Infinity to find on the surface of the planet Aktis IV. Upon its discovery, a deceived Dr. Glassman requested Infinity to transport the UNSC's half of the key down to the planet, to examine how the two artifacts would interact. Captain Lasky dispatched a Pelican and a Broadsword to deliver the key to the site. As the aircraft approached their destination, they were both shot down by Covenant anti-air artillery. The attack, however, was not issued on Jul 'Mdama's order and was instead carried out by defectors of 'Mdama's own faction. Infinity's half of the Janus Key immediately fell into the hands of Jul 'Mdama's leading detractor, a self-proclaimed Sangheili prophet named Sali 'Nyon.[5] 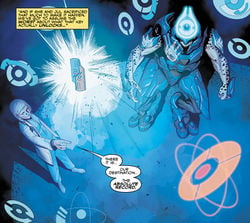 However, a Sangheili Minor disillusioned with 'Nyon's rebellion stole his half of the Janus Key and contacted 'Mdama's forces, offering them the key along with the location of 'Nyon's hideout.[6] A contingent of 'Mdama's troops met with the Minor, with Dr. Halsey personally verifying the artifact's authenticity. However, after 'Mdama redirected most of his forces elsewhere, three Spartan-IVs led by Commander Sarah Palmer ambushed the group. Halsey attempted to escape with the Janus Key half but she was taken captive by Palmer. However, the doctor was able to distract the Spartan commander, escaped with the artifact, and was picked up by one of 'Mdama's Phantoms. Now in possession of both halves of the Janus Key, 'Mdama and Halsey recombined the artifact, generating a holographic map to pinpoint the location of the Absolute Record.[7]

On September 15, 2558, hiding within the Urs system, Halsey pinpointed the exact location of the Absolute Record. Two days later, as the fleet prepared to depart for the Absolute Record, a Phantom carrying Spartans Palmer, Thorne, Holly Tanaka, Dr. Glassman, and Ayit 'Sevi,boarded Breath of Annihilation, intending to reveal the location of the Absolute Record to the UNSC. The fleet arrived at an artificial gas giant with a dormant slipspace portal opening due to the close proximity of the Janus Key. Before the fleet could press forward, slipspace ruptures materialized around the fleet, destroying at least two ships and damaging Breath of Annihilation.[8] While Halsey and 'Mdama argued about the situation, she reminded him that once they reached the Absolute Record, they will discover technology beyond their comprehension that will do more than compensate for the ships that were destroyed. Halsey further exaggerated that once he was in control of the Absolute Record's "treasures", 'Mdama would be seen as a god. Thus 'Mdama decided to travel to the Absolute Record, with only Song of Retribution entering the portal while the rest made repairs. As Retribution entered the portal, 'Mdama learned of rumors of the Spartans attacking personnel of Annihilation. Halsey dismissed 'Mdama's fears and stated that the Spartans could not stop them from reaching the Absolute Record, unaware that Palmer, Tanaka, and Glassman had boarded Retribution. The carrier traveled through the portal and arrived at the Record where all the humans aboard were detected by a Contender-class Custodian.[9] 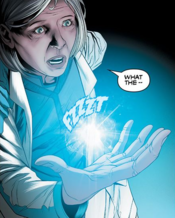 After Retribution was forced through a portal to a large chamber, Halsey, 'Mdama, and a contingent of Zealots traveled to a lower platform, where Halsey addressed the ancilla and told it that she was selected by the Librarian and her possession of the Janus Key was proof of it. However, the AI was skeptical of her claims, stating that Halsey could have obtained the Key by force and especially pondering why the other humans aboard Retribution felt the need to conceal themselves. The AI had its Sentinels bring the other humans down to the platform, and stated its intent to let each human have a chance to account for its presence at the installation. Frustrated after a heated conflict between the two parties, the AI removed the flooring from under the feet of the Sangheili, with Tanaka, Palmer, and Glassman remaining on one platform and Halsey with 'Mdama standing on another. In order to decide who would be the legitimate steward of the Absolute Record, the AI decided on a direct examination.[10] It had both factions isolated and gave them a hypothetical scenario, in which a sapient species turned out to have bodies conducive to a Flood vaccine. Abducting and harvesting live beings would give a thirty-five percent chance of Flood-immune material, but receiving dead bodies from the beings would give them a thirty-three percent chance. Despite 'Mdama's advice, Halsey chose live capture while Glassman chose the peaceful option, and the ancilla commended both. It then asked if their opponents in this test should be kept confined or immediately killed, but instead of answering, Halsey hacked the ancilla and shut it down, taking control of the Record for herself.[11]

In the Record, Halsey followed a hologram of the Librarian directing her to dormant design seeds scattered across the galaxy, which she could choose to activate the next step of their plans for human evolution. As she listened, 'Mdama started to grow impatient with Halsey and told his warriors to restrain her once she left to remind her of who was in charge. Halsey overheard 'Mdama's through the Record's systems and decided to sever their partnership and send the installation's Sentinels to attack 'Mdama and his men.[12] As Halsey made preparations, Palmer, Tanaka, and Glassman came in contact with a Sentinel containing the backup memory of the Record's ancilla. With their aid, the AI regained control of the facility and barred Halsey from controlling it further. The custodian then took the Janus Key and pulled the Absolute Record back into slipspace.[13]