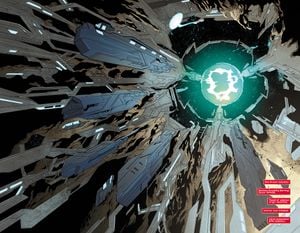 The Absolute Record is a Forerunner artifact repository spread across multiple sites associated with the Janus Key.[1][2] One of the Absolute Record's local facilities was overseen by a Contender-class ancilla Invariant Bias.[3]

In 2557, during an encounter with 343 Guilty Spark beneath Mount Kilimanjaro on Earth, a personality imprint of the Librarian stated that she would go to the Absolute Record once their conversation was over to join her other personality imprints who had already gone there. Though the Librarian offered to allow Spark to join her, he chose to remain on Earth to help his friends amongst the crew of the Ace of Spades.[4]

In 2558, the Librarian's stored personality on Requiem instructed Doctor Catherine Halsey to take the Janus Key to the Absolute Record[1] and was later sent there itself by Fireteam Crimson.[5] After the events on Aktis IV, Dr. Halsey and Jul 'Mdama managed to acquire both halves of the Janus Key.[6] After several months, Halsey was able to pin-point the exact coordinates of the Absolute Record by analyzing the completed Janus Key. With their destination revealed, 'Mdama's fleet set course for the Absolute Record. However, unbeknownst to the Covenant, a UNSC team consisting of Spartans Palmer, Thorne and Tanaka as well as Dr. Glassman, and ONI operative Ayit 'Sevi managed to infiltrate a CAS-class assault carrier—Breath of Annihilation—within 'Mdama's fleet, with the intentions to reveal the location of the Absolute Record to the UNSC.[7]

When the fleet arrived at an apparently artificial gas giant, the Janus Key reacted and a slipspace portal opened nearby. However, slipspace ruptures destroyed two cruisers within the fleet and damaged Breath of Annihilation.[7] While the Covenant fleet recovered, Thorne and 'Sevi attempted to regain contact with the UNSC on Annihilation while Palmer, Tanaka, and Glassman traveled to Song of Retribution—'Mdama's flagship. Shortly after, Song of Retribution entered the portal alone and arrived at the Absolute Record, where the installation's Contender-class artificial intelligence detected the humans aboard the carrier.[3] Halsey and Jul exited the Retribution with a security force of Zealots, but the custodian AI did not relinquish control to her immediately as she expected. Instead it summoned the other humans hiding inside 'Mdama's ship, killed all the Zealots when they attacked the local Aggressor Sentinels, and assembled both factions for a test for who would be the true master of the Absolute Record.[8]

The Monitor put the survivors to the test by querying them about how they would respond in a hypothetical scenario, but Halsey grew impatient and hacked the ancilla. With it disabled, she took control of the facility and allowed herself into its central chamber.[9] At it she could activate hidden design seeds planted around the galaxy, and also took the opportunity to cut off her alliance with Jul by attacking him and his reinforcement warriors with Sentinels. In midst of the attack, Palmer, Tanaka, and Glassman aided the ancilla's backup program (stored in a Sentinel) so it could regain control of the Record.[10] The facility was damaged after Jul 'Mdama ordered Song of Retribution to fire into the Record in hopes of disabling its defenses. The momentary power interruption allowed the ancilla to regain control and overpower Halsey, taking the Janus Key from her and denying her further access. The Covenant recovered Halsey and fled the Record aboard the Retribution, unaware that she had attempted to betray them.[11] The local facility was heavily destabilized by multiple slipspace warps.[12]

Following the death of The Harbinger in May 2560, the Installation 07 sub-monitor, Adjutant Revendicate, attempted to contact the Absolute Record with the intent of entering information into the repository. The monitor was briefly questioned on its intent by Invariant Bias, who demanded to know what information Revendicate wished to withdraw, before being corrected. The Contender then proceeded to scan through the information provided by Revendicate - an up-to-date recording of information about the current state of the Milky Way galaxy gathered from various sources - before agreeing to accept the data into the archives.[13][14]

Other points of access to the Absolute Record still exist, although the distinction between physical and digital elements of this Forerunner repository remains unclear.[2]