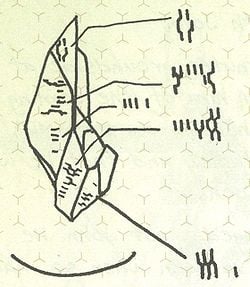 The artifact, as drawn by Dr. Halsey.

The artifact was a crystalline object that contained a star chart embedded within its structure, with coordinates leading to the Soell system, where Installation 04 is located. It featured Forerunner symbols synonomous to those found in the xenoarcheological site beneath SWORD Base on planet Reach.[1]

The artifact arrived on Sigma Octanus IV in the form of a meteor some 60,000 years before human occupation of the planet.[2] The human inhabitants of the planet later found the artifact and placed it in the Côte d'Azur Museum of Natural History.

Scans of the artifact were later given to Cortana and Dr. Halsey, who attempted to decrypt its contents as a form of language.[1] During the Fall of Reach, Cortana successfully translated the artifact in a form of a star chart instead of a language, leading the UNSC Pillar of Autumn and its crew to Installation 04.[4]