"Should'a been on Sigma O4 by now. Nothing but blue skies, beaches and college girls."
— UNSC trooper[4]

Sigma Octanus IV, located in the Sigma Octanus star system in FLEETCOM Sector Three,[5] is a human Inner colony planet with one natural satellite named Highpoint.[2][1] It features a warm, humid atmosphere, and much of the planet is a dense jungle.[6][7] Franklin Mendez, the head instructor for both the SPARTAN-II and SPARTAN-III programs, was born on Sigma Octanus on March 21, 2492.[8] 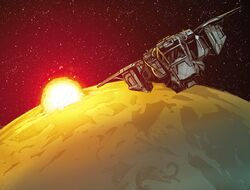 The Spartan-IIs exfiltrate from Sigma Octanus IV as Côte d'Azur is destroyed with a HAVOK nuclear weapon.

60,000 years prior to human colonization, a meteor containing a Forerunner artifact crashed on the planet on 57,448 BCE. It was later discovered by humanity and was placed on display in the Côte d'Azur Museum of Natural History.[7]

Some time prior to 2552, the Unified Earth Government colonised the planet, and prior to the Battle of Sigma Octanus IV, it had a population of nearly seventeen million citizens. The human colonists found the atmospheric conditions to be perfect for growing warm weather crops, giving rise to the many rice fields around Côte d'Azur.[9][3] UNSC personnel considered it to be a desirable location for leave owing to the weather and beaches.[10]

In the July 2552, the Battle of Sigma Octanus IV began with the invasion of the crusading alien faction, the Covenant. One of the planet's major population centers, Côte d'Azur, was attacked by Covenant ground forces and a team of Spartan IIs were deployed to find out why the Covenant were so interested in the city. The Forerunner artifact in the Museum of Natural History was being analysed by the Covenant, and the Spartans were able to retrieve it, before leveling Côte d'Azur and the Covenant presence within with a HAVOK nuclear weapon. Later on, it was discovered that the Forerunner artifact contained directions to Installation 04 in the form of a star map reference.[11]

The assault on Sigma Octanus was a distraction to remove the Forerunner artifact, and as such, it escaped being glassed by the Covenant.[12] However, in addition to Côte d'Azur, at least four other cities on the planet - Caracas, Huiren, Silma and Enfield — were destroyed in the battle, either due to Covenant invasion or to preemptive destruction by the UNSC to deny the Covenant the objects they sought.[13]