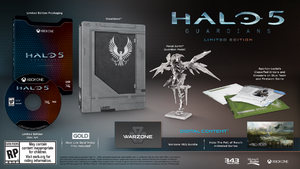 The dossiers (right), as included in the Limited Edition.

These dossiers are a series of in-universe text documents included in the Limited Edition and Limited Collector's Edition releases of Halo 5: Guardians.

The documents included in the collectors editions include a document containing the specific orders issued to Spartan Locke for his mission in Halo 5: Guardians - to hunt down the Master Chief - some time after the game's second level Blue Team. The packet also includes eight personnel dossiers - four detailing the members of Fireteam Osiris (Locke, Buck, Tanaka and Vale) and four detailing the members of Blue Team (John-117, Kelly-087, Linda-058 and Frederic-104).