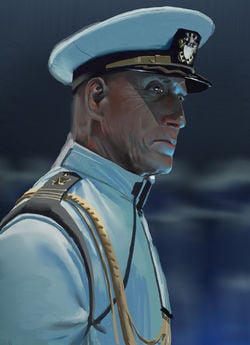 Chief of Naval Operations (CNO) is an office of the UNSC Naval Command held by a high-ranking flag officer, typically a fleet admiral, who is the UNSC Navy's senior officer.[1]

It is a purely administrative office and such an officer does not exercise command over naval operating forces. However, the Chief of Naval Operations is also dual-hatted as Commander-in-Chief Fleet (CINCFLEET),[2] and in this capacity, presides over the Navy's primary combatant command with authority over the Fleet's vast array of warships and small craft. The CNO is the Navy representative to the UNSC Security Council at HIGHCOM Facility Bravo-6 in Sydney, Australia;[1][3] the Commander-in-Chief of the Office of Naval Intelligence (CINCONI) who leads the UNSC's intelligence service, despite being a subordinate command of the Navy, sits on the council in an equal capacity.[3]

The Deputy Chief of Naval Operations serves as one of the CNO's main staff officers.

The former Covenant rank of Imperial Admiral may have held a similar position within the now disbanded fleet's command structure.

Lord Terrence Hood assumed his duties as Chief of Naval Operations/Commander-in-Chief Fleet sometime before September 4, 2552.[1] During his tenure as CNO/CINCFLEET, Lord Hood has served concurrently in vital posts during the Human-Covenant War's final year and in the years following, as Commander, Home Fleet during the Battle of Earth and as one of President Ruth Charet's main diplomatic envoys to the war-ravaged colonies and to the former Covenant.[4][5][6][7][8][3]