"From Earth, For Earth"
— Slogan seen on various posters across the campus. Originally from the poem Forward Unto Dawn.

Corbulo Academy of Military Science (CAMS), sometimes referred to as Corbulo Military Academy,[1] was an Officer Candidate School of the United Nations Space Command located on the colony of Circinius IV; at the time of its destruction, its superintendent was General Black.[2] Active during the height of the Insurrection, Corbulo Academy trained the children of high-ranking officials within the government and military to become commissioned officers in the various branches of the UNSC Armed Forces;[3] despite this, many of the cadets came from colonial backgrounds.[4] The academy was named after the Roman general Gnaeus Domitius Corbulo, who was said to represent the values of honor, valor and allegiance expected of the cadets. "Axios", a prominent acclamation used by the cadets and personnel of the school, was spoken by Corbulo as he committed suicide by order of Emperor Nero.[3]

A general view of Corbulo Academy.

The campus of Corbulo Academy stood atop a mountain within a wooded region on Circinius IV; the surroundings of the school were used as training grounds. The main complex of the academy followed the UNSC's characteristic design aesthetic, closely reminiscent of the 20th-century style known as Brutalist architecture, being composed of angular, low-rise concrete structures, walkways and spacious plazas with minimalist decoration in form of pools of water and carefully managed greenery. The academy's central building rested on a series of support pillars and enclosed a quadrangle containing a park with a decorative pool. The campus was dominated by a space elevator that stood in the middle of the buildings and was used for ferrying personnel and cargo from surface to orbit. The facility also contained several massive communications dishes and a number of large vertical-axis wind turbines for power generation. Playing fields and other open training areas were located just outside the buildings.

Many walls within the academy were adorned with the academy's insignia as well as other UNSC symbols or propaganda posters. Corbulo Academy made heavy use of the poem "Forward Unto Dawn" for propaganda purposes; lines including "From Earth, For Earth" and "Today, Tomorrow, Forever" were displayed as slogans in UNSC banners across the academy and the poem itself was inscribed over the cadets' beds in the school's dormitories. A somewhat anachronistic statue of the school's namesake wielding an MA5 series assault rifle was located next to the pool within the academy's central courtyard.

The cadets' dormitory facilities consisted of corridors lined with two-person sleeping quarters, with minimalist interior decoration similar to the rest of the campus. These rooms were equipped with holographic data terminals which were commonly used for accessing messages from relatives or browsing news reports, among other activities. Adjoining the dorm corridors were equipment and weapons locker rooms, showers and cryo training facilities dedicated for each squad.

A group of cadets gathered around a holo-table during a lecture on tactics.

Corbulo Academy was an institution primarily dedicated for the offspring of high-ranking UNSC or UEG officials,[3] with the cadets generally being around fifteen to sixteen years of age in their first year[5] and graduating with an officer's commission after a four-year education. The Corbulo curriculum was geared around the teaching of military science to its officer cadets. Military science is defined as the theory, method, and practice of producing military capability in a manner consistent with national defense policy.[6]

The cadets' eventual choice of career appears to have been relatively open-ended, with the graduates ending up serving in various military branches and roles. For first years, teaching was not geared towards a particular service, and even cadets who would become Naval officers (such as Thomas Lasky) would participate in extensive field and classroom exercises designed to teach ground combat tactics such as the pincer movement. Additionally, first year cadets would regularly be put into cryo chambers and thawed in order to acclimatise them to the cryosleep process used aboard UNSC Navy ships.[7] Other first year training included basic fitness, military courtesies, and hand-to-hand combat.[3]

First year cadets were arranged into nine-person squads for training purposes. By their fourth year, at least some senior cadets were given command of these squads.[3]

"Axios!"
— An acclamation used by those at the school (Greek for "I am worthy.")

Unusually, the cadets in Corbulo Academy addressed their superiors as "sir" regardless of gender. In the mainline UNSC Armed Forces, female superiors are addressed as "ma'am". 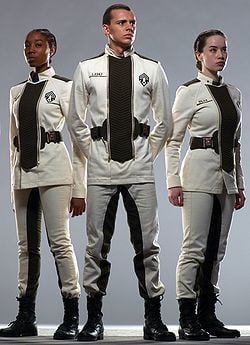 For "everyday" occasions such as classes and personal time, the cadets at Corbulo Academy would wear a white service uniform featuring a similar cut to the Navy's officer service dress. It was a relatively simple uniform compared to the advanced uniforms seen in use by the active-duty forces, though it incorporated a professional appearance and a moderate aspect of utility for field use. As with many uniforms throughout the UNSC military, there were no distinctions between the uniforms worn by male and female cadets. The uniform was a form-fitting ensemble and did not include any known headdress. The tunic's main feature, a large carbon gray section, ran the length of the uniform and attached to the seem, with two brass-colored zippers on each side. Positioned on the hips and attached at the abdomen was a large adjustable belt with two buckles on each side of the tunic. Cadet rank insignia consisting of small black lozenges (diamond-shapes) were placed on the right side of a low-profile "standing collar;" the lozenges represented each year of the four-year education the future officer would receive. A simplified black insignia of Corbulo Academy was placed on the left breast while a removable patch featuring the individual cadet's last name was positioned parallel with the top edge of the academy insignia. The trousers for the white service dress, featuring large black sections within the insides of the legs, had no visible utility function like the tunic. Polished black combat boots were the assigned footwear for the service uniform.

For combat training exercises, the cadets wore a jumpsuit largely similar to the service uniform in overall design. Like the service uniform, the jumpsuit was primarily white and similarly featured distinctly colored sections in the chest and legs, although the dark carbon gray in these sections was replaced by pale khaki brown. A training variant of the standard body armor could be worn over this uniform. Somewhat smaller, lighter, and providing less coverage than the standard armor, the training armor carried the Academy's emblem on the chest plate, and featured a Pouch Attachment Ladder System on the stomach and back sections of the armor. It provided torso and upper and lower limb protection, and featured shoulder pauldrons similar to the later-introduced M52B body armor.[8]

Two shirts could be worn underneath the white service uniform. Most cadets wore a dark olive green t-shirt with a white academy insignia on the left breast and "CAMS," the academy's formal name abbreviation, written on the back; senior cadets would wear a light azure blue variant while juniors and sophomores wore a medium/dark scarlet variant. This shirt could be worn separate of the tunic as personal wear and presumably for physical training and other rigorous activities. For personal time in the dorms, including nighttime, cadets wore black trousers emblazoned with the "CAMS" initials on the upper left thigh. A black sports bra with white piping underneath the bust was issued to female cadets.

For stays in cryostasis, a skin-tight carbon black suit featuring the cadet's last name on the collar was available, featuring a similar diagonal line pattern as the removable tunic panel and fit snug onto the body. During training exercises featuring cryo-sleep, the cryo-suit was typically not removed after the cadets were thawed out of cryo and the training jumpsuit and combat armor were worn over the suit until the exercise was over.

Hair was worn in a conservative manner as is custom in most UNSC units. Males were seen with a traditional "military cut," with the hair evenly cut from the base to the top only exceeding a centimeter at the most. Sideburns were kept neatly trimmed, un-flared, and the base was a clean, horizontal line not exceeding the bottom of the earlobes. Males were not permitted to accrue excessive amounts of facial hair and were expected to be clean shaven. Though they may retain longer hair, while in uniform, females were required to maintain a hair style that did not exceed the top edge of the collar with most opting to wear their hair in braids or cornrows.

At some point prior to the Human-Covenant War, Thomas Lasky's older brother, Cadmon Lasky, trained at Corbulo. He became a favorite amongst the instructors there, which later resulted in Thomas Lasky being looked down upon by many for not living up to his brother's standards.

Prior to 2526, the teacher of logistics Harper Garvin defected to the United Rebel Front.[9]

During the opening days of the Human-Covenant War in 2526, ONI Section II kept the Covenant invasion secret from a large portion of the general population; this included Corbulo Academy's cadets and most of the school's personnel, although General Black was informed. As preparation for a possible attack, Black discreetly increased the readiness of the UNSC Marine garrison posted in the academy and authorized limited communications blackouts under the guise of routine maintenance procedures. 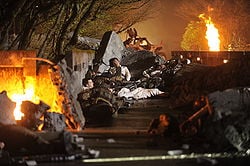 An outdoor walkway strewn with debris and bodies after the attack.

Not long after, on April 26,[10] the school came under attack by the Covenant, with at least three heavy corvettes descending over the campus and one of them destroying the academy's space elevator, halting the ongoing evacuation effort. Teams of Marine Orbital Drop Shock Troopers dropped in to the academy grounds to reinforce the locally stationed Marines, with the Spartan supersoldiers John-117, Kelly-087, Frederic-104 later arriving to support the academy's defense. Corbulo's officer cadets and the local Marine guard were caught off-guard by this attack, which resulted in the deaths of virtually all the students and personnel stationed at the academy, save for three survivors rescued by Blue Team. The Academy itself was completely destroyed when the planet was glassed after the attack.[11]

The surviving cadets were later reassigned to other OCS academies to finish their education. Lasky later joined the UNSC Navy as naval officer, flying fighter craft and retrained as a ship warfare officer, achieving the rank of Commander and became the Executive Officer of the Infinity-class supercarrier UNSC Infinity. During the Battle of Requiem, Lasky was reunited with the Master Chief and his decision to help the Master Chief against the Ur-Didact led to Lasky being promoted to Captain and being given command of the Infinity shortly before the New Phoenix Incident. Sullivan joined the Office of Naval Intelligence and was assigned to Section One with the rank of commander after finishing school.

While a fictional setting within the Halo universe, Corbulo Academy was filmed on-location at Simon Fraser University in Vancouver, British Columbia, Canada.[12] SFU is a popular filming location for many notable science fiction series such as Stargate SG-1 and Battlestar Galactica and served as a principal location for production of Halo 4: Forward Unto Dawn.

The prop of the academy's statue of General Corbulo is on display in 343 Industries' headquarters. As the statue is bisected by a Sangheili Zealot's energy sword in Forward Unto Dawn, the prop bears a diagonal, red-lit groove.[13]