Walter Vickers[2] was an officer cadet of the United Nations Space Command. He attended Corbulo Academy of Military Science as part of the class of 2529.[3] 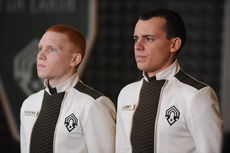 A native of Boundary, Vickers' father was an advisor for Misriah Armory and, as with most cadets at Corbulo, his parents were responsible for arranging his education in the academy. He was originally going to go to the academy with his brother; however, the latter died at some point before they were to attend.[4] At some point around the 2525-2526 school year, Vickers took over from Thomas Lasky as the leader of Hastati Squad as a result of Lasky's constant disregard of orders and apparent tactical ineptitude. Despite this, Lasky would continue to do things his own way in combat exercises, to the ire of his squadmates and the Academy staff.[5]

As Lasky did not show any improvement in his behavior, Vickers continuously harassed him, with a comment about Lasky's deceased brother eventually prompting Lasky to attack Vickers in the school's mess hall. Following this incident, Lasky led Hastati Squad in its final field exercise of the 2526 term. Vickers participated in the exercise, and through the use of unconventional tactics and feints, the squad was successful.[6] Following this, Vickers' and Lasky's relationship improved somewhat, even joking that Lasky "looked like crap".[7]

"Hey! Guys, run!"
— Vickers sacrificing himself for the squad.

As the Battle of Circinius IV started, Hastati Squad was to be evacuated via the Academy's space elevator. However, after the Covenant's destruction of the tether, the squad was caught in the battle between UNSC Marines and the Covenant military. The squad attempted to escape to the Academy's armory, which resulted in the death of cadet Junjie Chen at the hands of an active camouflaged Sangheili Zealot.

In the armory, Lasky sent out a distress signal while the rest of the squad attempted to open the weapons locker. When they realized that the locker could not be opened via the console, Vickers tried to break a locker open with a fire extinguisher. After the Zealot managed to break into the armory, Vickers, in order to give the rest of his squad a chance to escape, charged the Sangheili. The Zealot rounded on Vickers and opened fire on him with a plasma rifle, killing him instantly with a single shot to his chest.[8] 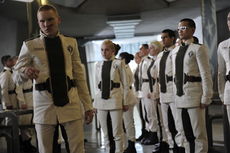 Vickers after the fight with Lasky.

A hawkish, aggressive figure, Vickers tended to favor direct, blunt solutions to problems. When asked what he thought of the Insurrection, Vickers replied; "From where I see what's going on, I don't think we're winning, and I think we need to do everything possible to win."[2] During Hastati Squad's last field exercise of the 2526 term, Vickers did not understand Thomas Lasky's plan to engage the opposing force with feints, instead favoring an all-out attack that favored their equal numbers.[5] During the Battle of Circinius IV, he attempted to gain access to locked ammunition lockers by using a fire extinguisher as a battering ram, and shortly afterwards, charged a Sangheili Zealot to give the rest of the squad a chance to escape.[8]

Although some of the other cadets had difficulty with the academy's physical training, Vickers instead felt that it was not severe enough.[4] In his time at Corbulo, he could often be found in his room doing handstand pushups.[5] He was not particularly sociable and his aggressive demeanor did not earn him many friends. He was aware of this fact himself, but he viewed socialization as a distraction from the academy's focus of training people to work together professionally, and in terms of teamwork in the field he felt that he fit in perfectly. When asked what he would see himself doing in ten years, he stated that he might aim for a career similar to that of General Black, helping the UNSC prepare and train people fight the Insurrection.[4]

Vickers felt that the UNSC was taking half-measures in its fight against Insurrectionists,[2] and he despised Thomas Lasky as an "innie-lover". Vickers was much more cutting in his insults than the rest of Hastati Squad, going as far as to taunt Lasky over his older brother's death. After he led Hastati Squad to victory in a field exercise, however, Vickers and Lasky's respect for each other improved.[7]

Vickers is portrayed by Canadian actor and composer Iain Belcher.