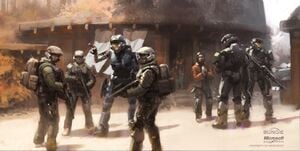 The Unified Ground Command (abbreviated UNICOM or UniCom) is one of two combatant commands in the United Nations Space Command military organization, alongside Naval Command, tasked with coordinating the terrestrial operations of the UNSC's terrestrial defensive forces.[1] It oversees the operational deployments of the Army, Marine Corps, and the Air Force,[2] though administrative control of these forces is kept within their respective branches.[3]

UNICOM serves as the terrestrial equivalent for the UNSC Naval Command - and focuses on operational control of ground, air, and maritime forces during planetary warfare campaigns.[4] Missions conducted under UNICOM oversight include disaster relief, search and reconnaissance, infantry deployments and other "ground pounder" missions.[1] While administrative control is retained within their respective branches (such as Army Administrative Command and Marine Corps Forces for the Army and Marine Corps, respectively), UNICOM maintains the authority to direct units to conduct missions and delegate tasks - though does not include the ability to alter the internal structure of their forces.[3] Forces tasked under UNICOM are organised into combined-arms task forces, which may be paired with NAVCOM equivalents to form larger joint task forces - which are appropriately assigned to one of the four Central Commands covering a given region of human space.[4]

UNICOM oversees deployments of the UNSC Air Force and UNSC Army,[2] alongside select units of the UNSC Marine Corps. Unlike the other two branches, Marine Corps units may transition back and forth between NAVCOM and UNICOM authority in combat zones - something which is managed by UNSC Joint Deconfliction Teams. Marine units generally organised under UNICOM are those conducting long-term planetary security, training and equipment for other forces, and force augmentation for other UNSC garrisons.[3] Marine forces deployed in space and aboard UNSC starships, alongside the Orbital Drop Shock Troopers, are not under UNICOM authority and are instead under NAVCOM control (with the ODSTs and Marine special forces units specifically falling under Naval Special Warfare Command).[1][3] This includes those Marine forces deployed by NAVCOM as landing parties and expeditionary ground combat units - a reading of the regulations vehemently contested by UNICOM.[3]

Alongside regular UNSC military forces, UNICOM has the authority to take control of colonial militias and regional security forces to accomplish its goals.[5]

While UNICOM's structure is loosely modelled on that of the now-defunct United States Marine Corps,[1] it has a number of major differences owing to the advancement of technology and the spread of humanity across the stars. The advent of artificial intelligence and other automated processes allows much of UNICOM's administrative functions to be delegated - resulting in its human personnel focusing more of their time and energy on direct military matters. Combined with the UNSC's high standards for training, this allows UNICOM to maintain a high "tooth to tail" ratio of warfighters to support and logistics personnel, as well as ensuring that UNICOM comissioned and non-commissioned officers have considerably more authority and autonomy than their historical forebears.[4]

As part of its military standardisation, UNICOM maintains a generally standardised rank structure and organisational chart. While per-service and circumstantial exemptions do exist (such as the Marine Corps and Air Force generally not employing Warrant Officers), there is a considerable degree of standardisation for personnel and military units across all three of the service branches under UNICOM's purview.[4] The following is an overview of the standard UNICOM force deployments, particularly geared toward the Marine Corps and Army. The numbers provided are ideals though circumstances in the field mean that these numbers are highly variable. The higher echelons of the force are accompanied by significant numbers of logistics and support personnel.[1]

The Halo Encyclopedia (2009 edition) claims that UNICOM's unit composition and rank hierarchy are based on those of the United States Marine Corps. This has since been negated as the Army uses the rank of specialist (E-4) and fields permanent brigades. These are both United States Army traditions that are not shared by the Marine Corps.