"Assembled here tonight are all surviving Spartans save three, who are otherwise engaged on fields of combat too distant to be easily recalled. In the last decade of combat there have only been three KIAs and one Spartan too wounded to continue active duty. You are to be commended for having the best operational record of any unit in the fleet. It is very good to see you all again."
— Dr. Halsey beginning her briefing.

Operation: RED FLAG was a planned United Nations Space Command operation designed to put an end to the 27-year struggle of the Human-Covenant War. It was initiated by ONI Section Three in mid-2552 as a desperate attempt to avert humanity's imminent defeat at the hands of the Covenant; however, the operation was never carried out due to the Fall of Reach and the UNSC's subsequent retreat to Earth.[1]

Admiral Margaret Parangosky, head of the Office of Naval Intelligence, would first reference RED FLAG in a letter to Vice Admiral Stanforth on July 19th, 2552.[2]

The operation was to be executed in four phases,[3] around a colony under attack by the Covenant; Admiral Stanforth preferred one with a large amount of Forerunner relics. Reach was at first only a hypothetical option, but ONI was willing to sacrifice the planet after calculating the inevitability of its discovery.[2][4] Although the operation was initially planned to be a Spartans-only mission, a battalion of Orbital Drop Shock Troopers under the command of Major Antonio Silva were also assigned to RED FLAG possibly out of concern that the Navy would be unable to handle it alone.[5]

Despite the Fall of Reach, the loss of most of the SPARTAN-II force assigned to the operation, the death of almost all Pillar of Autumn's crew, and the destruction of the vessel at Battle of Installation 04, John-117 had every intention of continuing Operation: RED FLAG, despite arguments against it by Lieutenant Elias Haverson and Cortana. During the Skirmish over Threshold, the Master Chief actually succeeded in part of the operation by capturing the Ruma-pattern light carrier Ascendant Justice, but lacked the personnel to continue the mission. The Master Chief only agreed to not continue the mission after proper instructions were given by the Admiralty on Earth.[7] RED FLAG was also considered as a possible way to stop the planned Covenant attack on Earth, but was discarded as an option as John-117 knew that they couldn't risk the Gettysburg-Ascendant Justice. Instead, the SPARTANS went with Operation: FIRST STRIKE. 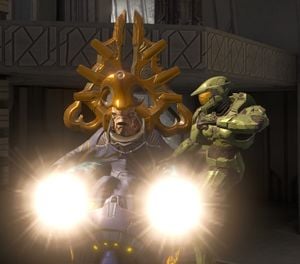 Death of the Prophet of Regret.

Ultimately, the plans would be canceled by a lack of resources and manpower. The invasion of Earth began shortly after the remains of RED FLAG arrived back at the homeworld, effectively scrubbing any chances of a high-risk offensive by special warfare units accompanied by fleet support.[8] However, events initiated within the ranks of the Hierarchs and High Council would provide a similar outcome to that envisioned by High Command and Naval Intelligence just months before. An ongoing feud between the increasing Jiralhanae threat encroaching on Sangheili commanders throughout the military planned by the Hierarchs would ultimately culminate in its fall, the Great Schism tore a rift between these two castes, with the former of the two species becoming the favored guardians of the Great Journey.[9][10] These events came to a head following Supreme Commander Thel 'Vadamee's failure to prevent the destruction of Installation 04, causing considerable turmoil within the Covenant. Taking advantage of these brewing events, on November 2, 2552, the former Spartan leader of RED FLAG managed to infiltrate a heavily-occupied area on Installation 05 (Delta Halo), defeat a detachment of Sangheili Honor Guardsmen, and assassinate the High Prophet of Regret, having been informed of the Covenant's ultimate goal: the firing of the Halo rings.[11] Just days after during a Flood assault on High Charity, the High Prophet of Mercy was killed by the spreading infection in front of John-117.

A month later, a joint Human-Sangheili force of the Fleet of Retribution led by Commander Miranda Keyes began an operation to destroy the remaining command elements of the High Prophet of Truth and his fleet at the Citadel. This joint force destroyed a handful of Covenant infantry forces, in addition to their armor and aerial assets. The push to the Citadel ultimately led to end of the Human-Covenant War with the assassination of the Prophet of Truth by Arbiter Thel 'Vadam, with John-117 as witness.[12]

The eventual assassination of the three Hierarchs resulted in the death of the Covenant, ending the hostilities of the Human-Covenant War.