"Sir, that was the most brilliant maneuver I have ever seen."
— Lieutenant Hikowa to Commander Jacob Keyes. 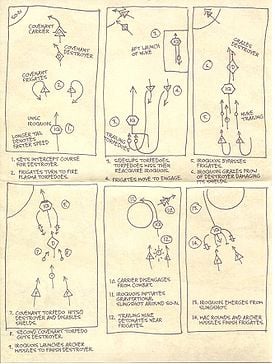 The "Keyes Loop", as drawn by Captain Keyes for Dr. Halsey.

The Keyes Loop[1][2] was a famous space tactical maneuver first executed by then-Commander Jacob Keyes at the Battle of Sigma Octanus IV in 2552. The result was one of the rare naval victories achieved by the UNSC over Covenant forces, and it led to Keyes' promotion to Captain by Admiral Stanforth. It also provided a badly-needed morale boost to the whole fleet.

Arriving over Sigma Octanus IV in response to a possible impending Covenant attack, the destroyer UNSC Iroquois, under the command of Commander Keyes, found itself outmatched by the arrival of a Covenant battle group consisting of one carrier, one Wik-pattern light destroyer, and two frigates (medium-sized support ships). They were only expecting four medium-sized ships.

Keyes resolved to attack by setting the Iroquois on a collision course for the destroyer at emergency acceleration while launching a nuclear warhead in what seemed to be the wrong direction. The two escorting frigates proceeded to launch one plasma torpedo each, but the Iroquois managed to evade by utilizing its emergency thrusters. Having missed their target, the plasma torpedoes came about and continued to track and home in on the UNSC warship.

The trailing ordnance was to prove critical to the success of Keyes' strategy. A last minute course correction allowed the Iroquois to merely graze the destroyer's shields rather than smash directly into the ship, resulting in the destruction of a large portion of the Iroquois' armor (the collision tore through two meters of titanium armor, and subsequently breached every bottom deck of the Iroquois). However, the tracking plasma torpedoes were unable to correct themselves for the sudden maneuver of their target and, consequently, hit the Covenant destroyer instead. A heavy salvo of Archer missiles sent the remainder of the Covenant warship to its destruction.

With the momentum built up during the first phase, the Iroquois performed a slingshot maneuver around the planet. Once safely away, the nuclear warhead deployed earlier was detonated, completely draining the shields of the two frigates. Having completed its orbit, the Iroquois resumed its attack and destroyed the two frigates with two heavy MAC rounds and hundreds of its remaining Archer missiles. Its escorts destroyed, the carrier disengaged and escaped from the system. Before leaving, it dropped 34 dropships and a stealth ship to continue the ground assault. Later, the carrier hailed the rest of the attack fleet to Sigma Octanus IV.

In the aftermath of the battle, the Iroquois was damaged to the point that it required almost a complete overhaul. Fifteen percent of the electronics had to be replaced due to EMP burnout from the Shiva. Eight magnetic coils had to be replaced as well, disabling the MAC for a time. One of the emergency thrusters had to be refilled. The engines' vents had fused together due to extreme heat, and would need a complete overhaul to get them fully operational. Even after refit aboard the UNSC Cradle, only 50 percent power was available. Finally, and most dangerously, all of the bottom armor and bottom decks that had been eroded by the Covenant destroyer's shields were replaced. Commander Keyes was offered by the Cradle to repaint the Iroquois, but he declined so that he would never forget the ship's battle scars.