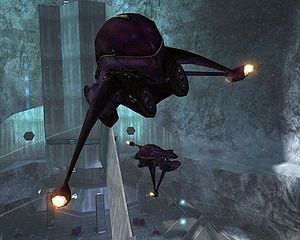 A pair of Banshees flying over the control room of the Halo Installation 04.

"Banshees of legend warned of death, and today all UNSC veterans know the cry of this glittering alien terror.[1]"

Banshee is the name applied to a series of Covenant atmospheric/exatmospheric support aircraft.[2] The Office of Naval Intelligence has typically type-classified encountered banshee variants used during throughout the Human-Covenant War under the designation of the Type-26 Ground Support Aircraft (T-26 GSA).

A blueprint of the Irdnekt-pattern Banshee.

A prolific aircraft, the Banshee has been used by ancient Sangheili, Covenant forces and Covenant remnants.[2] It is usually piloted by Sangheili, though Jiralhanae pilots became common after the outbreak of the Great Schism. The cockpit, in which the pilot rests prone, is encased in a curved, reflective cowling with no discernible windscreen.[3][4] The craft has two wing canards, each of which terminates in a boosted gravity propulsion drive including a jet and an anti-gravity pod; these leave a vaporous exhaust trail behind the Banshee. The craft is capable of achieving a velocity of over 100 kilometers per hour (62 mph).[1][Note 1] The Banshee is capable of performing complex maneuvers such as aileron rolls and flips. The Banshee is also capable of hovering, though this ability is not often used.[Note 2]

Several variations on the standard design exist, though combat performance is fairly standard among all variants. A given craft's architecture is based on its functionality,[5] the year in which is manufactured, the branch to which it belongs,[6] and even the aesthetic preference of the one who commissions the craft.[5] Amphibious attack and escort Banshee variants were commissioned throughout the Covenant's history for the Covenant's oceanic installations and during deep-sea artifact retrieval missions, although they have rarely been encountered by the UNSC.[5] Incorporates design details more closely related to an aerial predator hailing from the Jiralhanae homeworld of Doisac. Many of the Banshees in Atriox's fleets have been modified with brutal and experimental weaponry, usually designed to inflict maximum damage from both a physical and psychological perspective.[7]

The Banshee sports two weapon pods attached underneath the fuselage; each pod contains a Class-2 plasma cannon capable of firing in the 100-250 kilowatt range and a Class-2 fuel rod cannon.[8][9] The plasma cannons are deadly to infantry; one bolt can instantly kill a lightly armored target. Armored targets such as the M808 Scorpion MBT can withstand only a few bolts before being destroyed. A direct hit from the Banshee's fuel rod cannon is almost invariably fatal, even to armored infantry. Repeating plasma cannons, which have a greater rate of fire than the standard armament, can be installed at the front of the anti-gravity pods.[10]

The fuel rod cannons mounted on the Anti-Air Wraith and the Banshee use the heavier Class-3 fuel rods, which have a greater range and a capability to track heat signatures.[11][12] The Seraph is additionally equipped with four fuel rod cannons, which are capable of locking onto air targets.[13]

Is'belox-pattern Banshees are used by the Covenant against humanity.[19]

In 2552, a surviving Sangheili escaped from Madrigal on a Banshee after witnessing John-117 activate the Forerunner keystone.[20]