Dawn is the second campaign level of Halo 4, and the first one with actual gameplay. After years of cryo-sleep, John-117 awakens to fight the resurgent Covenant in the wreckage of the UNSC Forward Unto Dawn.[1] 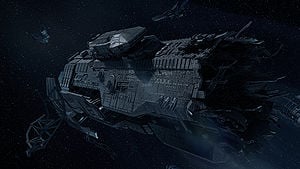 The Forward Unto Dawn's remains.

A field of debris surrounds the rear half of the UNSC Forward Unto Dawn.

The frigate comes into closer view, revealing the ship's nameplate. A giant shadow slowly looms over the ship. Inside the Dawn, mechanical parts drift aimlessly in zero gravity. An automated message loops through the speakers.

The scene shifts through abandoned sections of the ship. Suddenly, an orange energy pulse moves through the ship, scrambling some of the still-active viewscreens. Inside the cryo chamber, a sphere of blue light hovers above a holographic projector. The sphere disappears in a flash of blue as the ship shakes again, replaced by the figure of Cortana.

Cortana gasps and looks around the room, then proceeds to stand up. She activates a holographic terminal, quickly browsing through a status report. 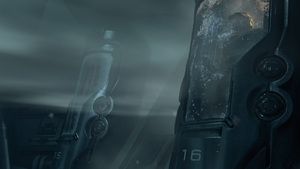 John-117, moments before his revival.

Muffled explosions can be heard, signaling multiple decompression events - the ship is being boarded. Increasingly agitated, Cortana brings up the cryo chamber's control interface. A schematic of a modified Mark VI MJOLNIR armor is displayed, alongside life signs and cryo-tube diagrams. A single prompt appears on-screen.

Air is pumped into the tube's interior as part of the thawing process.

The frost covering the tube's glass surface melts away, revealing John-117 underneath. Cut to black.

The Chief slowly awakens inside the cryo-tube, groaning. He slams his gauntlets into the glass surface in confusion.

John's HUD appears on his visor.

The gravity system comes online. The drifting crates and debris in the room drop onto the floor.

John looks up and pulls the cryo-tube's manual release lever. John quickly steps out as the tube opens, walking over to the holotank that Cortana is occupying. 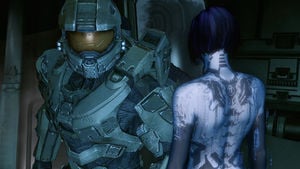 John-117 and Cortana prepare to leave the cryo bay.

John pulls Cortana out of the holo-tank and inserts her into his neural interface. John raises his MA5D assault rifle, readying for combat.

Below the walkway leading out of the cryo chamber, a single computer terminal containing John-117's service record can be found. The terminal displays a picture of technicians assembling the Chief's MJOLNIR Mark V armor.

Proceeding will prompt the terminal to narrate a concise summary of the Chief's involvement in the Human-Covenant War, starting from the Battle of Installation 04.

The next room contains a holo-projector, displaying a schematic of the Dawn's stern half.

The Chief can activate a terminal in front of the hologram multiple times, gaining information on the ship's status. 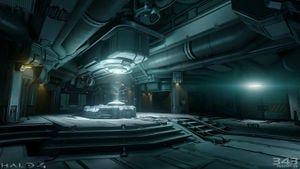 John enters an operations room, filled with inactive computer screens. A central holographic unit displays the Dawn being pulled from its predicted drift course towards a planetoid, designated "43121124". The same orange energy pulse suddenly returns, violently shaking the hull and disrupting nearby electronics.

John leaves the room, arriving at the elevator entrance.

John approaches the doors and pries them open with his bare hands.

John successfully opens the elevator doors. The shaft ahead has been depressurized; a pack of crates behind John is sucked into the vacuum, knocking him onto the other side of the shaft. He grabs a nearby ledge, stopping his fall. The crates continue downwards into the seemingly-bottomless shaft.

John slowly climbs up the shaft.

Debris fall from above. The Chief quickly jumps to another ledge to the left, managing to avoid the falling fragments. (If the debris is not avoided, it hits Chief, drains his shields, and sends him back down to where he started that section of the climb.) 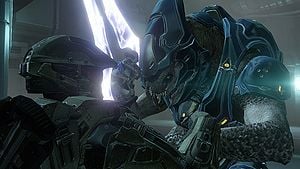 John-117 struggles with a Sangheili at the shaft opening.

John manages to climb to the entrance for the observation deck, avoiding more falling debris. A Sangheili Storm wielding an energy sword decloaks and immediately assaults the Chief. John blocks the Sangheili's sword strike. The Sangheili snarls at him, but John punches it in the face, dazing it. He then grabs the Sangheili by the mandibles and throws it into the elevator shaft. (If the player fails to press the melee button in time, then the Sangheili slashes at John, draining his shields, and shoves him down the shaft.)

John enters the observation deck. The windows are covered by the blast shields. A Sangheili is attempting to access the controls on an elevated central platform, while multiple Unggoy are patrolling either side of the deck below. They open fire as soon as the Master Chief is sighted. John takes them all out.

John heads for the controls and activates the override. The blast shields gradually rise.

The blast shields fully open, revealing a Zanar-pattern light cruiser fleet moving closer to the Dawn. Behind the fleet, a mysterious world ominously looms. A formation of Banshees rapidly scream past the observation deck's windows.

The Phantoms split up, taking opposite sides of the Deck.

The boarding arms breach the glass, depressurizing the Deck until force fields are deployed to seal the breach. Two Covenant lances exit the boarding arms and enter the Dawn. 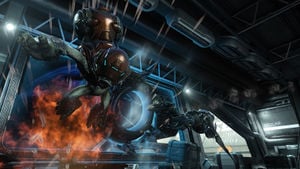 The Chief kills Jul 'Mdama's Covenant boarders with a grenade.

The deck is locked down, forcing the Chief to engage the boarders in close-quarters.

If the Chief takes too long eliminating Covenant forces:

John eventually clears the deck. The lockdown is lifted.

If the Chief is next to the main window:

If the Chief is not next to the main window:

John heads for the elevators.

If the Chief accessed the ship's systems:

If the Chief did not access the ship's systems:

John enters an elevator, which descends a few floors until it opens to another hallway. He fights through more Covenant forces, eventually reaching a stairway near a window.

After fighting his way through more Covenant, including a Commander wielding a concussion rifle, John reaches an airlock.

The airlock doors open, revealing the Dawn has moved much closer to the mysterious planetoid. 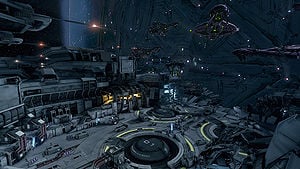 John makes his way over to the launch station, encountering Sangheili, Kig-Yar, and Unggoy Rangers.

The Chief proceeds to activate the console.

The silo door on the far side opens, revealing the Hyperion missile underneath. The missile fails to fire, however; the door mechanism is stuck in place.

Phantoms drop off more troops into the area, forcing John to take them out before he can launch the missile.

John pushes, and then kicks the blast door to its proper position.

The missile launches, hitting the approaching cruiser, which is charging up a ventral weapon (possibly an energy projector). The cruiser shatters into pieces and the debris drifts over the Dawn. Suddenly, a beam of orange light from the planet scans the Chief.

Massive segments of the planetoid surface begin to retract, revealing a blinding white-blue energy field beneath. Covenant cruisers nearby are sucked into the opening.

Everything not bolted down is pulled toward the planet.

John makes it inside the airlock, which opens after being depressurized.

John heads back into another hallway.

John proceeds down a hallway, but the floor collapses slightly before he can reach the end.

John heads into an intersection full of Unggoy. Most of the floor suddenly collapses, forcing John to go around the perimeter of the room.

John enters the vehicle bay; the panicking Unggoy inside are promptly crushed by falling debris.

The ship continues to crumble around the Chief, who quickly exits the bay.

A wounded Sangheili limps down the hallway and falls. He struggles to get back up again and expires shortly afterwards, his energy shields flicking off.

The Chief charges ahead, rushing past more fleeing Unggoy. By this point, the hallways are continuously bursting into flames.

As John makes it to the escape pods, one of the doors is ripped from its hinges.

John tries to hold onto the door, but fails. He manages to grab hold of a railing. The chamber rapidly depressurizes as the walls are peeled away, revealing a Covenant cruiser ahead.

The railing eventually gives way as well, and the Master Chief is sucked out of the ship and into the debris field. A hull section slams into John, draining his shields.

A large segment of the Dawn smashes violently into a light cruiser, triggering secondary explosions that rip the Covenant warship apart. The body of an Unggoy falls past him and crashes into the burning cruiser.

John drifts through a gaping hole the impact left in the cruiser. Explosions continue throughout the crippled ship. A piece of debris suddenly hits the Chief at high speed. Cut to black. 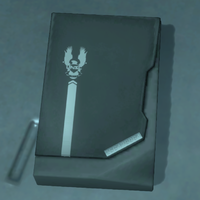