Reclaimer is the sixth campaign level of Halo 4, and the fifth one with actual gameplay.

With the Mammoth operational but heavily damaged, the UNSC forces push on to the control center before being forced to stop due to a landslide. The Master Chief proceeds on foot alone, fighting off heavy enemy forces including several Kig-Yar Snipers and Prometheans. Finally, the Chief reaches to control center where Cortana causes the two remaining cannons to destroy each other. However, Cortana vanishes from the system and the Master Chief chases her to a meeting with an imprint of the Librarian. The Librarian explains some of the history of the Forerunners, ancient humanity and the Flood and reveals that the Prometheans are ancient humans digitized by the Composer, a device that the Didact now seeks in order to do the same to the entire human race. After stating that the Master Chief's evolution is "the culmination of a thousand lifetimes of planning," the Librarian accelerates his evolution with the Chief's agreement to grant the Master Chief an immunity to the Composer.

Retrieving Cortana and heading back outside through a portal, the Chief discovers that Infinity has not been able to destroy the gravity well. Fighting his way to a nearby cliffside with the help of Marines and several vehicles, including Scorpion tanks, the Chief paints the gravity well for Infinity with a target designator, allowing the ship to destroy it and set itself free from Requiem's influence.

In the aftermath of the fight, Captain Del Rio refuses to go after the Didact, citing the need to file a threat assessment back at FLEETCOM and accusing the Chief and Cortana of hallucinating the whole experience. With Cortana's rampancy worsening and Del Rio refusing to change his mind, the Master Chief decides to defy direct orders in order to go after the Didact himself with only Cortana for backup.

Fade from black. Captain Del Rio surveys Requiem's surface from the window of UNSC Infinity's bridge. Two Broadsword fighters pass overhead, disappearing along the horizon. He gazes around the bridge before walking over to the holodeck. The hologram depicts a Pelican flying through a desert canyon. Del Rio proceeds to address the ground teams.

Cut to Gypsy Company's Pelicans, flying through the canyon.

Scene transitions to the interior of the Pelican. The Master Chief, Marines, and two SPARTAN-IVs observe a holographic display of Del Rio as he speaks.

An image of a particle cannon appears next to Del Rio. 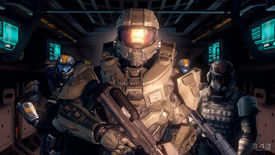 John prepares to leave the Pelican.

The Pelican prepares to land, and John turns to the door as it opens. The Marines and Spartan-IVs form-up behind him.

Making his way through the tunnel, the Mammoth towers overhead.

If the Chief wanders around the Mammoth.

John proceeds to board the Mammoth, several Marines saluting him as he passes, and finds Lasky at the fore of the vehicle on the uppermost level.

The Chief grabs a jetpack near the aft section of the Mammoth.

The Mammoth begins to move.

The Mammoth travels along the side of a sheer cliff. Three Pelicans fly just ahead of the Mammoth.

The Mammoth rounds the bend. A large Forerunner construct floats in the distance. The particle cannon begins to initiate the firing sequence.

The cannon fires. Two Pelicans are instantly vaporized, while the third goes down in flames from a glancing blow. 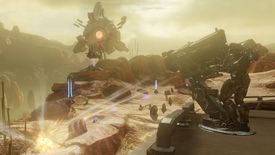 John and the infantry onboard the Mammoth clear the enemies from a high vantage point and press forward towards the crash site.

A Covenant Phantom converges on the crash site.

The Chief exits the Mammoth and approaches the surviving Pelican crew.

The Chief clears the hostiles surrounding the surviving Pelican forces.

The Chief recovers the target designator.

The Chief paints the target. Meanwhile, Covenant reinforcements, including a Wraith, assault the ground forces.

The Mini-MAC fires upon and destroys the Phantom.

John eliminates the remaining enemies in the area.

The Chief targets the particle cannon.

The Mammoth proceeds to the next area, where they run into a river.

The Mammoth crosses the stream.

The Mammoth continues onward, but two Phantoms wait ahead of the Mammoth's path.

Banshees soon join the attack as Cortana announces their arrival.

After clearing the air attack, the Mammoth veers away from the cliff edge and continues down a wide canyon.

The Mammoth moves up.

The second power source is destroyed.

The third and final power source is destroyed.

As the Chief proceeds to the next area, the Mammoth follows. The second particle cannon is visible on the far end of the canyon. 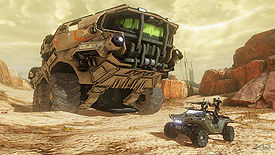 The Chief paints the particle cannon.

A Phantom approaches, followed by a Lich dropship.

The Lich fires upon the Mammoth, disabling it. Meanwhile, several Phantoms drop in Ghosts and a Wraith.

The Chief clears all immediate threats.

Phantoms drop in more Ghosts and Wraiths. Once the Wraiths are destroyed, the Lich moves position.

The Chief fights his way up the mesa, arriving at the gravity lift into the Lich. Once inside, he eliminates the Covenant crew and destroys the power core.

The Chief leaps from the damaged Lich, landing on the ground. The Lich drifts aimlessly out over the ocean, finally exploding.

The Chief boards the Mammoth, and it begins moving towards the next objective. (previous dialogues will play if the Chief jumps from the Lich and lands on the Mammoth, causing it to move again.)

The Mammoth reaches a series of waterfalls and comes to a stop.

As the Mammoth begins moving again, the Chief's HUD flickers as Cortana experiences another rampant episode.

The Mammoth rounds a corner, coming to a dead end. A small path leads up to a Forerunner structure to the right.

As the Chief rounds the corner of the trench, a Promethean Knight appears on a ledge at the far end of the area.

The Chief proceeds through the trench and fights his way past Covenant and Promethean forces, including a large number of Kig-Yar Snipers stationed on the surrounding cliffs and on structures in the area. As the Forerunner structure comes into view, the Chief makes his way inside, fighting past a number of Prometheans.

The Chief makes his way through the facility, a Sentinel leading the way. It opens a door to an elevator and the Chief steps on.

More Sentinels lead the Chief through the lower levels of the facility, taking him to the controls for the particle cannons.

The Chief proceeds, plugging Cortana into the console ahead.

Cortana shuts the cannons down.

Cortana disappears from the console.

As the Chief makes his way back the way he came, a hard light bridge appears on his right. The Chief follows a series of tight corridors, arriving to find five Sentinels waiting in front of a door. The door opens as he approaches. A beam of blue light with Cortana standing in it waits on the other side. As he steps into it, the screen washes to white.

John and the Librarian.

The Chief holds a hand up, trying to see through the shine of Requiem's artificial sun. A figure descends from above towards him.

The Chief looks at the Composer.

Surprised, the Master Chief turns back and stares at her. Fade to white.

A series of narrative scenes play as the Librarian speaks.

The narrative ends, the scene returns to John and the Librarian.

An ominous rumbling is heard. The Librarian looks up, fearful.

Pillars rise from the clouds, Promethean Knights perched atop them.

The Chief's body is held up by the pillar of light. He glows with energy as the Librarian accelerates his evolution, and is lowered into a crouch. He stands up, and almost immediately he is beset by Promethean forces. Cortana appears on a pedestal to his left.

If the Chief chooses to fight the Prometheans instead of immediately going to get Cortana:

The Chief eliminates all the Prometheans.

The Chief heads over to the elevator, boarding and taking it down. Near the elevator is the fourth terminal.

The elevator comes to a stop, a portal to exit the facility waiting for the Chief. As he steps through it, the Chief is instantly taken to a battlefield outside the gravity well.

THE GRAVITY OF THE SITUATION[edit] 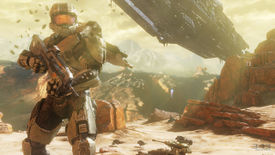 John arrives at the canyon near the gravity well.

The Chief fights his way up the hill towards the gravity well.

The convoy destroys the first line of Covenant.

The convoy destroys the second line of Covenant.

The Chief comes to a Covenant shield blocking the way to the gravity well.

Off to the left, the Chief approaches two shielded generators powering the large shield. He destroys the first one.

The Chief destroys the second generator.

The Chief makes his way to the gravity well. As it comes into sight the Chief moves towards the target designator that lies in wait.

The Chief picks up the target designator and paints the gravity well.

Cut to the camera on Infinity's fired projectile. It hits the gravity well, destroying it with a clean shot. Cut to John as he watches the gravity well explode before walking off. Fade to black.

Fade to Infinity in flight. The camera pans inside to show the Master Chief, Cortana, Del Rio, Lasky, and Palmer gathered around the holo-table.

The ship's lights grow brighter. Del Rio and Lasky look up and then to Cortana as her body flickers red with anger.

A wave of energy expands from Cortana as she screams at Del Rio, causing displays to short out and spark. Almost instantly, she returns to her normal state, showing embarrassment for her rampancy's progress as the holo-table sparks and smokes.

Lasky reluctantly reaches for the chip. However, the Master Chief takes it before he is able. As Cortana disappears from the table, Del Rio advances on the Chief.

The Chief defiantly inserts Cortana's chip into his helmet.

The Master Chief steps forward, towering over the captain.

Del Rio furiously stands back and turns to his bridge crew members, pointing to the Chief.

Palmer and other personnel don't move. Lasky tries to diffuse the situation.

The Chief leaves the deck. Del Rio turns to watch him go, a look of disbelief and anger on his face. Cut to black.