This article is about the content update going to be released for Halo: The Master Chief Collection. For the seasonal update for Halo Wars 2, see Season 8 (Halo Wars 2).

The Season's emblem is an stylized lion head. This Season marks the introduction of the Fractures concept into the Halo universe, featuring several non-canon armor permutations into Halo 3, based on multiple human cultures. The Season also adds Halo: Combat Evolved and Halo: Reach into the Custom Game Browser, improvements in customization options for Halo: Reach and Halo 4, expands Firefight options for Halo 3: ODST, and graphic improvements for Halo: Combat Evolved (both Classic and Anniversary versions), Halo 2 Classic, and Halo 4. New collectibles, in the form of Moa statues, were added into Halo 3's campaign.

The following was implemented in Season 8:[5]

A full breakdown of the event's unlocks can be found here. 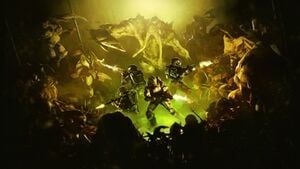 Keyart for the Floodfight update

Released in April 2022, the Floodfight update was a major update release for The Master Chief Collection. The update's primary feature was the release of the Floodfight mode for the Firefight component within Halo 3: ODST. Accordingly, the Halo 3: ODST Editing Kit was also released, allowing players to mod the ODST component of the collection.[7]

On October 6, 2021, a trailer known as Go Medieval was released on YouTube and Twitter to announce the release date of Season 8 and showcase the menu background for the season, depicting a D77-TC Pelican in the middle of an ancient Greek ruin. The video is voiced by Frank O'Connor reading the last dialogue lines from Halo Legends' Origins .[8]

To showcase the release of Season 8 and its new customisation content, a trailer for the update was released on October 13, 2021.[9]

New in this update

The Custom Game Browser (CGB) has been improved to include Halo: Combat Evolved and Halo 3, as well updates to filters, search options, and updates to the Create, Browse, and Search pages.

Updates to view model offsets for weapons across all MCC games

View Model Offset settings are now available in the Settings under Gameplay. They can be set by weapon category and are available for all games within Halo: The Master Chief Collection.

Campaign collectibles in the Halo 3 campaign

Golden moa statues have begun appearing in Halo 3 missions in locations that change every week. These can be collected by shooting them and are tied to challenges.

Halo: Combat Evolved and Halo 3 now support vehicle and weapon customizations during missions if this option is toggled on in the campaign mission options.

For Halo: Combat Evolved, the heads-up display (HUD) can now be toggled between the classic or remastered HUD, and scaled manually or automatically to your display’s resolution with the Auto HUD Scale setting.

For Halo: Combat Evolved and Halo 2 Classic, the Gamma settings for classic and remastered campaign visuals are now separate settings. This allows visuals even closer to the original games.

Player reporting in scoreboards and roster

Scoreboards during and after a match now include the ability to report a player.

Steam accounts can now be linked to Xbox accounts in the player profile menu when playing on Steam. This populates the friends list with Steam friends.

PC players can now save or upload Forged map and game variant files from their recent custom games. A new “File Share Trust Level” has been added in Settings under “Gameplay.” It is set to “Official” by default but can be switched to “Friends” or “Anyone."

Many improvements come from Halo Insiders feedback and Halo Support tickets submitted by our community. Thank you for participating and please keep submitting tickets! Here are the many fixes in this update:

Customization menu previews no longer show graphical glitching on certain items on “Original” or “Performance” Graphics settings. The LG OnScreen Control app on PC with an LG monitor display no longer causes performance drops and hitches. While adjusting Field of View (FOV) settings, the background preview image is no longer blurred, and adjusts in real-time to changing the FOV setting.

The “Save” widget now properly appears on the Forge pause menu without requiring the player to use “Save As” once first.

Significant framerate and performance improvements have been made to several areas of Waterfall.

The lighting in the final cutscene of the “Reclaimer” outro cinematic is now the correct brightness.

Temporary files generated after playing a Multiplayer or Firefight match now display their actual file size instead of the maximum allowed file size.

The Narrator function no longer adds “Custom” after reading session information on the Browse menu in the Custom Game Browser.

There have been fixes and improvements to the mod tools for Halo: The Master Chief Collection on Steamworks. To learn more about the Steam mod tools and discuss them, visit the mod forums on Steam.
November 3 Patch Notes (Version 1.2611.0.0)

NEW IN THIS UPDATE

Many improvements come from Halo Insiders feedback and Halo Support tickets submitted by our community. Thank you for participating and please keep submitting tickets!

Crashes are now less likely to occur during Big Team Battle (BTB) matches. This fix may also result in performance improvements on some systems.

No new known issues have been identified for this update, but the team is tracking two additional known issues from the previous update:

NEW IN THIS UPDATE

This update contains some bug fixes and improved information for players. Communication improvements include:[12]

Many improvements come from Halo Insider feedback and Halo Support tickets submitted by players. Thank you for participating and please keep submitting tickets! Resolved issues include:

No new known issues have been identified for this update. Our Known Issues section has a list of existing issues for each game.
April 2022 Floodfight patch notes (Version 1.2904.0.0)

Mod tools are now available for Halo 3: ODST. You can download these tools on Steam. Within the Steam app, set your Library filter to include "Tools," locate “Halo 3: ODST Mod Tools” and install.

To learn more about the Steam mod tools and discuss them with other players, visit the mod forums on Steam.

More information about this update

Join the Halo Insider program for the chance to see new features before they’re released publicly and, if you’ve encountered a bug in-game, submit a Halo Support ticket so that the development team can investigate the issue. Thank you to all Halo Insiders and ticket submitters for their bug reports and feedback!

Some of the improvements in this update required us to invalidate past Theater films and Campaign saves. If you have films you would like to save, please record them using a digital recording tool.

Many platforms automatically update games. See Updating Halo: The Master Chief Collection on PC for detailed instructions for how to manually update your game on Steam or the Microsoft Store app.

We have a range of player guides and other support articles for Halo: The Master Chief Collection, including:

Many improvements, especially those related to Floodfight in Halo 3: ODST, come from Halo Insider and Halo Support tickets submitted by our community. Thank you for participating and please keep submitting tickets!

The following improvements are based on feedback and Halo Support tickets from a Halo Insider flight in September 2021.

With this update, the team has added nine new issues to our Known Issues list:

The following changes were made in the April 14, 2022 patch.

The Gravemind’s most fervent wish is for a galaxy united in unlife, where it can look on the stars through every sentient beings eyes and raise a chorus to everlasting victory through their tortured and twisted throats. ODST forces who train to contain and eliminate the Flood have passed their first trials, but the parasite is always adapting, learning, and massing in hidden hives. To prepare for the inevitable return of the thinking dead, the UNSC has ordered an update of the War Games training simulations and a new round of containment exercises.[13]

In the Flighting build for Season 8, and in the Canon Fodder post first announcing them, three pieces of armor were available that did not make it to release in the final season. The first, the Blackguard Tearful Bishop helmet, was cut entirely without explanation; although the helmet was re-added into the MCC in the November 3 update, its name was changed to "Fallen Equerry", and the cross visor and description were changed. The second consists of the Belos Valorous shoulder pauldrons - in the original Flight they had an arrow sigil as part of their design while in the final release they bear the Season 8 lion emblem. The third was the Evalach's Lament back accessory - in the original Flight it was painted with a cross, while the final version was changed to be four squares.

A new post-match screen after completing a multiplayer game in Halo: Combat Evolved and Halo 3, alongside a new pose option for both games, was present in the flight but it was cut from the release. The flight also featured in-game subtitles for Halo 3 and Halo: Reach campaigns, but weren't featured in the final release.

Elites and Flood enemies were to be added as an enemy wave option in Halo 3: ODST's Firefight and it was featured in the flight, but issues with AI behavior forced 343 Industries to cut those enemies from the season's release. They were eventually added in an update on April 11, 2022.