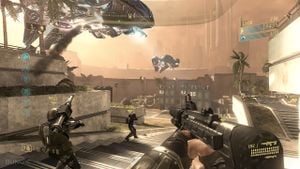 "Built on top of Halo 3: ODST's campaign, Firefight is a cooperative game mode that lets you and up to three of your friends put your skills to the ultimate test. It allows you to jump straight into the heart of Halo and experience traditional Halo sandbox encounters with a new, high octane twist. Though you’ve squared off against most of the enemies you’ll face in Firefight before, you’re not going to be able to rely on your past experiences alone to guide you through all of the action. In Firefight, even the most "harmless" enemy can become a dangerous threat when you’re low on ammo, low on lives, and have your back against the wall. Throw game play modifying skulls into the mix and you'll find that the combat can become even more interesting and intense."
— Bungie.net description

Firefight is a game mode that debuted in Halo 3: ODST, and has since become a staple gamemode across the Halo series. 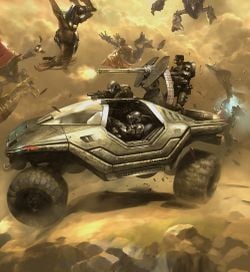 Firefight is an endless wave-based survival mode introduced in Halo 3: ODST to supplement regular competitive multiplayer matchmaking. Players compete to survive waves of Covenant troops deployed by Phantom dropships for as long as possible, earning points and attempting to survive as long as possible. The mode supports up to four players in splitscreen or Xbox LIVE cooperative play. Players have a limited number of lives - meaning the game only ends when all players are dead. Firefight can be played on Easy, Normal, Heroic and Legendary difficulties, and players can optionally enable the Blind, Cowbell, IWHBYD and Grunt Birthday skulls for no increase in score.[2]

Firefight is structured into waves, rounds and sets. A wave consists of a handful of enemy infantry deploying from one or two dropships or doorways onto the level at a time. Five waves make up a round and three rounds make up a set. At the end of every round, players are restored lives, weapons and vehicles. As a set progresses, a new skull will be enabled for each round, though these skulls will reset at the end of the set. Meanwhile, at the end of every set, an additional skull is enabled permanently, making the experience harder and harder. As the waves in a given round and rounds in a given set increase, the enemies deployed onto the battlefield will get harder, progressing from Grunts and Jackals to Brutes and Hunters - ending the round with Brute Chieftains. No matter what difficulty is selected for Firefight, the Tough Luck skull is always enabled.[2]

The following is a summary of the skulls featured in Halo 3: ODST's Firefight. Some skulls can be activated before setting up the match, for no change in score, namely: Blind, Cowbell, Grunt Birthday Party and IWHBYD. Most, however, are activated progressively throughout the match, as outlined below. The only Halo 3: ODST skull which does not feature in Firefight is Thunderstorm.

There were new achievements called Gravetender, with a similar condition is complete a Floodfight version of Endure. Currently, the only available set is set 1 while some may try to conquer Gravetender achievement to gain information on skulls that appeared in Floodfight.

In Firefight, players can choose to play as any of the members of Alpha-Nine, the ODST squad featured in the Halo 3: ODST campaign mode, with an additional bonus character of Sergeant Johnson for players who pre-ordered the game. In the original ODST game, characters could be unlocked by completing campaign missions. In Halo: The Master Chief Collection, all characters are unlocked in the Series 3: Recon progression system and available for play, including the previously-exclusive Johnson. The Master Chief Collection additionally introduces two new character variants based on models used only in the campaign, unlockable through Challenges.

Like player customisation in other Halo games, a player's choice of Firefight character has no bearing on their in-game stats and performance.

Firefight in Halo 3: ODST supports eight unique maps, with an additional two "night" variations on existing maps. All maps are based on locations found in the ODST campaign, typically those involving an element of wave defense in the campaign. Some Firefight maps in the original ODST release were unlocked by completing the campaign missions they were based off, though in The Master Chief Collection all are unlocked by default.

As part of The Master Chief Collection, Firefight has undergone a number of changes inspired by the customisability of the Halo: Reach iteration of Firefight. Notably, Firefight now supports gametype customisation, similar to that of Halo: Reach. Players can alter their player traits and equipment to make themselves more or less vulnerable to enemies, have unlimited ammunition or spawn with any weapon in the ODST sandbox. Notably, this feature now allows players to spawn equipped with a Battle Rifle, a weapon never-before available to use in Halo 3: ODST.[4]

The other primary major change introduced by the expanded Firefight options in The Master Chief Collection is the ability to change the vehicle spawns on the map. This change only affects the map Lost Platoon, as it replaces the default Warthog spawn on the map, but does not add vehicles to any other map. In custom gametypes, players can replace the Lost Platoon Warthog with a Gauss Warthog, Scorpion, Ogab'd-pattern anti-aircraft Wraith or even a Hornet - the latter two of which have never been available to use prior in the ODST sandbox.[4]

While The Master Chief Collection has these expanded options for Firefight play, the original endless survival experience is still available to play unaltered, now named the FF Classic gametype. For matchmaking play, the standard Firefight gametype performs exactly the same way but ends once one set is completed, and has a thirty minute time limit. Several new gametypes are included by default: Sniperfight, Rocketfight and Fiestafight. The wave options can also be customised, giving players the option of fighting Sentinels and Elites. Specific firefight gametypes that include these new enemies have been added, such as Robocalypse and Elitefight.

The April 2022 update for The Master Chief Collection allows players to fight the Flood in Firefight, as part of another new gametype called Floodfight. During Flood waves, maps are shrouded in a dense Flood fog. A variety of Flood enemies have been added, including Combat Forms, Pure Forms and Carriers. A new civilian Human Combat Form has been added, as well as Elite Major Combat Forms. In Floodfight, certain weapons on maps have been changed, such as the addition of the Flamethrower as a power weapon on some maps. This mode also adds the ability for the player's corpse to be infected by the Flood, which produces a brand new ODST Combat Form. Additionally, Aggressor Sentinel may sometimes appear between waves or in a bonus round. Due to the default setting, the Sentinels would often aim for the Flood Combat Forms instead of players. Some maps may receive changes for spawn location, such as Alpha Site where Flood Forms and Sentinels may appear from the elevator. Flood forms were also capable of driving Warthog at Lost Platoon, becoming a lethal force if not deal with quickly enough.

Strategies may be either unchanged or improvised to deal with the Flood forms and Sentinels, especially weapon-wielded ones since in one of the rare chances, players may stumble upon Flood Combat Form using heavy ordinances such as Fuel Rod Guns and Rocket Launchers.

Also in this update, new customization settings have been added to maps in the form of boons. Boons add helpful assets to the map that players can use, such as additional weapons and allied A.I. which spawn on some maps. Two Spec Ops Elites spawn in drop pods on the night versions of Rally Point and Crater, two Marines spawn on Lost Platoon and Security Zone, and two NMPD Officers spawn on Windward. These allies will respawn each round. Allied Elites can come equipped with Needlers, Plasma Rifles, Carbines, or Fuel Rod Guns, allied Marines spawn with Assault Rifles, Battle Rifles or Shotguns, and allied NMPD Officers spawn with Assault Rifles, Silenced Pistols or Shotguns. These allies can assist the player by manning vehicles or turrets.

Many of Halo 3: ODST's achievements are based in the Firefight mode. Due to The Master Chief Collection's already 700-strong achievement roster, no Firefight-specific achievements were added to the collection, though a number of Firefight-based Challenges were - notably, the Vidmaster Challenge: Endure achievement returned in Series 3: Recon as a challenge.

"From day one, when designing campaign missions, we outlined spaces that could work for Firefight. We didn’t have the resources to completely create our own, so they happened inside the missions—which helped the narrative, I think. I’d tell designers what spaces were important, because I had a vision for Firefight that couldn’t be played there and then. We took a massive leap of faith, making environments without Firefight yet existing. It worked out at the end."
— Paul Bertone on Firefight.[5]

Halo 3: ODST game director Paul Bertone was responsible for the conception of Firefight as an idea. While developing Halo 3, Bertone worked on the game's campaign scoring mode, which he credits with ultimately leading to Firefight. This, mixed with wave encounters like those from the level The Truth and Reconciliation in Halo: Combat Evolved ultimately served as the basis for the Firefight mode. Designer Tim Williams ultimately created the first Firefight prototype in-engine, and Martin O'Donnell was instrumental in giving Bertone the push needed to pursue active development of the mode.[5]

Bertone and the other designers on ODST then designed the campaign spaces to serve double-duty as Firefight maps from day one, even before the Firefight mode was functional, due to limited resources available to the small ODST team.[5] Firefight was later detailed in a dedicated ViDoc, Bip. Bap. Bam. Welcome to Firefight.

When porting Firefight into The Master Chief Collection, 343 Industries explored the idea of allowing the Elephant to be useable, so players could bunker down inside the vehicle with multiple turrets. However, this did not work out due to technical reasons - though the developers are still interested in potentially adding this later down the line.[4]