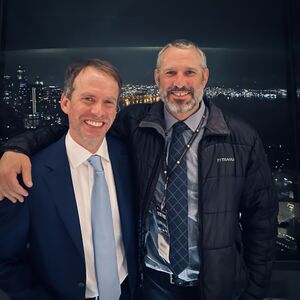 Paul Bertone, Jr. is a technical design director at 343 Industries. Bertone was also a senior employee and game designer at Bungie, ending his career at the company as a design director in January 2012.[1]

Born in Bellingham, Massachusetts, Paul Bertone was a paratrooper in the United States Army, and also went to school at University of North Carolina at Charlotte for engineering. During some of this time, Bertone played the games Myth: The Fallen Lords and Myth II: Soulblighter, where he was the captain of the prestigious and well-renowned team, Civil Order. After placing 1st in many tournaments, Bertone, aka "Ruiner," became employed by Bungie Studios circa 2000. He served on the design team for Halo: Combat Evolved, and was promoted to design lead for Halo 2.[2] He became the lead mission designer during Halo 3's development, scripting and designing the first mission of the game.[3] Eventually becoming design director, Bertone left Bungie in January 2012.[1]